Natural Law in One Stop 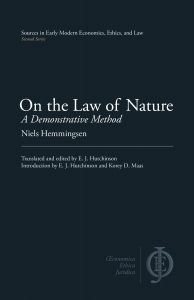 If I told you that someone had written a book that provided a concise one-stop shop summary of Aristotelian-Thomistic epistemology, philosophy of action, and natural law theory, and had integrated it with a theory of the virtues, you would—if you had any sense—rush to purchase such an indispensable volume. You would probably assume that it had been written by some eminent contemporary Roman Catholic philosopher or theologian—Jean Porter, perhaps, or a similar luminary in the field. If I told you further that this volume also integrated this account of natural law and virtue into an exposition of the Decalogue, you would probably just be confused; surely, that is asking too much of any one volume. If I went on to tell you that the book in question had been written by a Danish Lutheran crypto-Calvinist in the sixteenth century, you might think I was just pulling your leg.

But so it is. Thanks to the painstaking translation labors of Hillsdale classicist E. J. Hutchinson, Niels Hemmingsen has been retrieved from obscurity to speak afresh to the twenty-first century, and he is here to shatter all your paradigms. Defying the neat fashionable modern dichotomies of natural law ethics and virtue ethics, Catholic rationalism and Protestant voluntarism, and premodern vs. modern theories of natural law, Hemmingsen’s On the Law of Nature: A Demonstrative Method might seem to be a unique synthesis, a historical curiosity. But perhaps the most remarkable feature of the book is how representative it is, as the top-notch introduction from Hutchinson and Korey D. Maas goes some way to demonstrating.

Hemmingsen, although known to just a handful of specialist scholars today, dominated the intellectual scene in his native Denmark during his long life, which virtually spanned the tumultuous sixteenth century (1513–1600). Indeed, he was perhaps the most illustrious and influential student of his great teacher, Phillipp Melanchthon, the coolly reflective sidekick to the fiery Martin Luther, who deftly steered the ship of the Protestant Reformation on a moderate and sustainable course. Melanchthon, an intellectual giant of the Reformation whose nuance and impact is too little appreciated today, ensured from early on that the Protestant project would be firmly anchored on the soil of Aristotelian (read: teleological) philosophy and ethics, and indeed within a broadly Thomistic natural law tradition. Protestant metaphysics, Melanchthon and others ensured, was not fundamentally voluntarist, nor its epistemology fundamentally biblicist, and Protestant ethics represented a creative synthesis of Scripture with the scholastic and classical traditions.

The fact that these claim fly in the face of a century or two of scholarly stereotypes does not make them any less true, as Hutchinson and Maas deftly demonstrate in a tightly argued section of their introduction. In many ways, Hemmingsen’s On the Law of Nature, originally published in Wittenberg in 1562, represents a neatly distilled summation of this Melanchthonian project, augmented of course by Hemmingsen’s own voluminous classical erudition and careful reflections on philosophical method. It also represents, however, but one of many impressive Protestant natural law treatises in a broadly Aristotelian-Thomistic mold that were to appear over the coming decades, including On the Law in General (Girolamo Zanchi, c. 1577), The Mosaic Polity (Franciscus Junius, 1593), Of the Laws of Ecclesiastical Polity (Richard Hooker, 1593), and Dicaeologicae (Johannes Althusius, 1617).*

This volume, then, is obviously of historical interest. Although there has been a burgeoning renaissance of interest in Protestant natural law theory over the past two decades, news of this almost-forgotten intellectual tradition has been slow to leak out beyond specialists. One hopes that this publication, perhaps the most significant retrieval yet, will go some ways toward generating greater awareness and interest in this tradition. In particular, Hemmingsen’s high confidence in the powers of reason (limited though they be), and fascination with the classical philosophical tradition are striking even among his contemporaries.

More particularly, this volume occupies a significant place in Western intellectual history because of Hemmingsen’s emphasis on a “demonstrative method” of natural law. Consider his opening definition:

The law of nature is a certain knowledge, imprinted on the minds of men by God, of the principles of knowing and of acting, of the conclusions proved from these principles that are in agreement with the proper end of man. Reason constructs these conclusions from the principles by necessary consequence for the government of human life, so that man may recognize, want, choose, and do the things that are right, and avoid their opposites; and God has bestowed on men the conscience as the witness and judge of all these things (30).

As Hutchinson and Maas note in the introduction, such concern with logically deductive demonstration is often associated with the early Enlightenment, and the emergence of “modern natural law” in thinkers such as Grotius and Pufendorf. Premodern natural law, it is often argued, has more of an inductive flavor, limiting moral certainty to only a few general dicta, and is fleshed out not so much by logical deduction, but by an account of the virtues. Indeed, a frequent lament among Thomistic moral theologians in recent years has been the separation of natural law theory from the tradition of the virtues—an explication of which, of course, makes up the entire bulky Secunda Secundae of Aquinas’s Summa. Is Hemmingsen then a modernizing figure ahead of his time? Or are our dichotomies overly neat?

I leave it to readers to form their own conclusions on that question, but a few points are worth noting. First, despite what we might expect from the book’s title and the opening definition of law, Hemmingsen’s “demonstrations” remain for the most part quite general and under-specified. (Compare, for instance, with Samuel Pufendorf’s On the Duty of Man and the Citizen According to Natural Law a century later and you cannot fail to be struck by Hemmingsen’s restraint.) Second, his method is actually an elegant blend of the deductive and inductive, with most of the concrete content of natural law elaborated by observation of what in fact conduces to human flourishing. This excerpt, from his account of the natural law’s regulation of family life, provides a good example of his style of reasoning:

Whatever by itself preserves the domestic state in a sound condition is commanded by the law of nature. That spouses embrace one another in mutual love, beget and rear children, protect them, instruct them in honorable morals, guide them with discipline, and provide them with the things that are necessary; and, in turn, that children revere their parents, obey and be grateful to them, and similar comparable duties: these things preserve the domestic state. Therefore, these things are commanded by the law of nature. The major premise is immovable. The minor premise is shown from the contraries and the consequents. When these duties are violated, families fall into ruin, as many sad examples teach. Therefore, we see that by means of these duties households stand fast, flourish, and are preserved sound, especially when these domestic duties are referred to God as their ultimate end, as was said above. (78)

Third, to the extent that Hemmingsen does flesh out his account of what the law of nature requires in different spheres of life, it is less by strict demonstration than by a dense tapestry of classical quotations and a rich sketch of the virtues.

Great though its historical interest may be, Hemmingsen’s On the Law of Nature has at least as much to offer to readers who care little about Reformation-era moral theology. I was not exaggerating at the outset of this review when I called it “a concise one-stop shop summary of Aristotelian-Thomistic epistemology, philosophy of action, and natural law theory”; on the contrary, I have already taken to recommending this volume to students as the best and most efficient way to get a handle on the basic philosophical convictions of this tradition, which guided Western thought for centuries if not millennia. Hemmingsen’s account of the faculties and process of knowing, of the faculties of the soul, and of the teleological character of human action is masterful in its clarity and its precise use of Greek and Latin philosophical terms. Likewise, his exposition of the virtues, studded with classical apothegms and definitions, is a timeless gem.

For conservatives charged with the defense of the “permanent things” and the rich inheritance of biblical and Western civilization, books such as these are an indispensable resource for reequipping our moral imaginations and understanding of human action. The notion of a “law of nature” has fallen on hard times in our age, but to riff off of F. D. Roosevelt speaking in a very different context, it is not so much that the project of natural moral reasoning has failed in this generation, but that it has not yet been tried.

This review would not be complete without a brief mention of E. J. Hutchinson’s excellent work on the translation. Hemmingsen was more methodical than elegant in his prose, and Hutchinson does not try to make him into a stylist that he was not, but he does achieve great clarity and readability in his translation. Moreover, he takes great care over Hemmingsen’s precise and nuanced philosophical vocabulary, with judicious explanatory notes when necessary, and obviously labored long to track down sources for Hemmingsen’s numerous classical quotations. The result is a rare achievement: a first-time translation of a hitherto-unknown work that deserves to take its place on any educated person’s bookshelf.

W. Bradford Littlejohn is director of the Davenant Institute and Associate Editor of Political Theology. His website is bradlittlejohn.com.

* Note that of these titles, the first, second, and excerpts of the fourth have also been translated and published in the same series by Christian’s Library Press in recent years, and I have myself overseen a modern English “translation” of the third—see Divine Law and Human Nature: Book I of Hooker’s Laws, A Modernization (Moscow, ID: The Davenant Press, 2017).