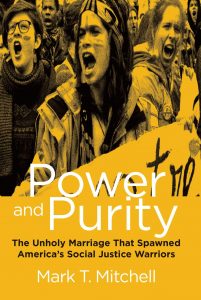 It is unfortunate that Mark T. Mitchell’s Power and Purity: The Unholy Marriage That Spawned America’s Social Justice Warriors has the subtitle that it does. One might—mistakenly—assume that the book is yet another foray into the already-past-its-prime genre of conservative broadsides against aggressive leftism on college campuses. That would be a serious misjudgment, because Power and Purity, over the course of its 148 pages, lays out a strikingly original argument about the contemporary political climate that should inspire much reflection.

Mitchell’s thesis is both simple and elegant: he contends that the worldview underlying a great deal of today’s progressive activism is a curious admixture of Friedrich Nietzsche’s reduction of all ethics to power and the zealous moralism of America’s Puritan heritage. Despite their seemingly irreconcilable presuppositions, the two paradigms nonetheless make up a distinctly American brew.

In keeping with Mitchell’s background in political theory, Power and Purity is more of a book about Nietzsche than about the Puritans. Following Alasdair MacIntyre, Mitchell argues that the heart of Nietzsche’s work is the “genealogical” critique of morality—the claim that all traditional moral discourse inevitably masks power plays by one group or another. This critique has implications for virtually every sphere of human life. In The Anti-Christ, Nietzsche famously argued that religion began when the first “priests”—weaker members of society—invented a web of transcendent punishments and rewards in order to exert psychological control over society’s physically dominant members. And more broadly, since all language entails the imposition by human beings of some classificatory scheme or another upon the phenomena of experience, on Nietzsche’s account the use of language itself is nothing more than a further power play.

To be sure, this claim is prima facie problematic as a logical matter. As Mitchell himself suggested in his 2018 volume The Limits of Liberalism, the argument for the genealogical approach itself is undermined by way of elenchus: any argument that purports to truthfully assert that all discourse is reducible to power must necessarily rely on the very words and structures of discourse whose legitimacy it denies—leaving the proponent of the genealogical approach, as MacIntyre observes, “unable to find the words, or rather to be able only to find words incompatible with the genealogical project.”

But, as Mitchell correctly points out, few of Nietzsche’s latter-day disciples go this far. Instead, “Nietzsche’s Puritan Warriors” prefer to hover at the level of surface criticism, decrying modern civilization as pervasively oppressive while simultaneously immunizing their own premises from critique. Mitchell’s explanation for this apparent inconsistency is that the contemporary campus left simply lacks the courage to embrace the full force of Nietzsche’s work; the philosopher who urged his successors to go Beyond Good and Evil would treat today’s students of critical theory as “craven fools who are unwilling to take the final leap and discard the Christian ideals whose foundations they have sought so assiduously to destroy.”

Perhaps that is correct, and today’s progressive activists are comfortable with an intractable logical inconsistency at the heart of their moral framework—in Mitchell’s words, they simply lack the “guts” to “go full Nietzsche.” But this feels too easy; it seems far likelier that they simply do not understand the full power of Nietzsche’s argument. After all, rational actors—and most modern campus progressives are indeed rational actors—do not engage in sustained activism without some underlying, substantive vision of the good. What, then, is the true appeal of Nietzsche’s genealogical approach, of the tendency to deconstruct the established order?

Nietzsche’s own work suggests an answer. Though Mitchell and MacIntyre stress (likely correctly) the centrality of the genealogical approach to Nietzsche’s project, it is also possible to read Nietzsche as a proponent of an alternative, pre-Christian moral vision—a vision that rejects the “weakness” and “slave morality” of Christian humanitarianism in favor of bold paganism. One might call this the Dionysian dimension of Nietzsche’s thought.

On the Dionysian reading, Nietzsche situates the true end of humanity—that is, the sacred—in the full flowering of passion and material desire, which was lost when the “priests” seized control of the West. This broadly parallels an argument made by Steven D. Smith in his recent Pagans and Christians in the City: Culture Wars from the Tiber to the Potomac, which contends that the rise of Christianity entailed the affirmation of a “transcendent sacred” over against the “immanent sacred” of classical paganism.

Smith explains that the ascetic or “eternal-looking” dimensions of Christianity—avoidance of gluttony, sexual restraint, renunciation of hedonic desire—were profoundly offensive to a pagan society that located the divine in transient matter and sensation. For the pagans, full participation in societal life demanded celebration of those who sought Venus in the brothels of Corinth, worshiped Bacchus at an imperial revel, and honored Ares in the gladiatorial arena. At bottom, Christianity’s rejection of these civic rites was nothing short of a repudiation of Rome’s Roman-ness, which led to widespread persecution.

In plenty of passages, Nietzsche seems to endorse a revival of this long-lost Dionysian sensibility. Indeed, Nietzsche’s legendary madman, after proclaiming the death of God, asks, “What water is there to clean ourselves? What festivals of atonement, what sacred games shall we have to invent?” (Here, one cannot help thinking of perhaps the most visceral depiction of the pagan sensibility in recent years, Ari Aster’s Midsommar.) Elsewhere, Nietzsche’s Zarathustra declares that “If a temple is to be erected a temple must be destroyed, that is the law”—calling, that is, for the destruction of the ossified Christian order and the reassertion of an alternate sacred ideal.

On a fuller and more accurate reading of Nietzsche—as MacIntyre and Mitchell clearly understand—these Dionysian passages are illustrative, not normative: they are metaphors for the kind of thinking in which the Übermenschen must engage after the death of God. But read in isolation from the deeper logic of Nietzsche’s project, they suggest the contours of a substantive good fully divorced from the Christian vision.

And that pre-Christian ideal may be surprisingly attractive to modern minds. One need only consider the themes of much contemporary progressivism—sexual liberation, biological heritage, environmental apocalypticism, idealization of preindustrial society, experience-based epistemology, and so forth—to see that there are numerous points of correspondence with the “this-worldly” religiosity of the classical age.

From this perspective, the deconstructionist tendencies of “Nietzsche’s Puritan Warriors” become easier to explain: despite their use of Nietzschean methods, they are not übermenschen but, in an ironic twist, reactionaries. Their demand to deconstruct the “systems of oppression” upon which modern civilization rests is the necessary condition for the full expression of a non-transcendent religiosity, one that promises full liberation from oppressive dogma and all transcendent claims. Theirs is not a cowardly reading of Nietzsche, but simply a bastardized one.

But that may well be a subject for another book altogether. As it stands, Power and Purity effectively exposes the irresolvable tension at the heart of any politics built around the genealogical approach, while simultaneously linking the features of this particular political moment to America’s latent Puritan impulses. That is an ambitious goal for any book, much less one that can be read in a single afternoon. But Mitchell, with characteristic effectiveness, manages to do it.

John Ehrett (J.D., Yale) is executive editor of Conciliar Post. His writing has appeared in The American Conservative, Washington Monthly, and Ethika Politica, among other venues.