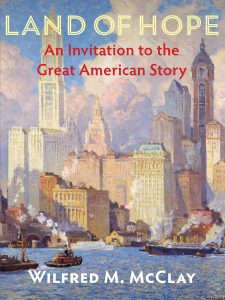 In this fine book, Wilfred McClay makes an important contribution to American education and culture. Every year it seems American young people emerge from school knowing less about their history even as they become more hostile toward their own tradition and values. The reason is not far to find. For decades, high schools and colleges have been subjecting students to textbooks designed to teach them that the United States can only be understood as that place where repeated injustices have been committed against marginalized groups. Even the physical layout of these texts denies America’s story as a land of hope. Sidebars and subnarratives are “broken out” from an almost vanishing central text to place tales of victimization at the center.

Land of Hope is no mere textbook. It makes available to general readers, as well as college and advanced high school students, a one-volume retelling of “the Great American Story” that is accurate and moving, enlightening and exciting. As McClay observes, stories are the means by which we “speak to the fullness of our humanity” and which we need “to orient ourselves in the world.” And so this book eschews graphs, tables, and lists, instead telling its readers about powerful characters, life-changing events, and long-term developments in America from before its European settlement to the new millennium, all as part of a larger story of hope in ordered liberty and opportunity.

McClay begins with background on both the new and the old worlds, setting the stage, as it were, so that the reader may know the natural and human conditions of the land as well as the character of those who would settle and reshape it into the United States. Covering, in narrative form, the major events, trends, and personalities of our history, it focuses on the formation and development of the “habit of self-government” as developed in the colonies and challenged time and again up to the present day. Settlement, revolution, Civil War, and other great events are put in context, as are cultural and intellectual developments from transcendentalism to immigration, the industrial revolution to the rise of Progressivism.

McClay is engaged in no quixotic attempt to unmake or ignore prevailing theories of American political and social development. Instead, he retells the stories of western expansion, of Indian wars and the institutionalization of slavery, of civil rights struggles, the Depression, and the Cold War in a manner that is fair and even generous to all concerned. (One might quibble that McClay is rather too generous to the tyrant Henry VIII and rather too harsh toward conservative stalwart and failed presidential candidate Barry Goldwater, but overall the tone is just right.) There is no score-settling here, no attempt to put forth any grand ideological vision from either the left or the right. Instead, McClay works to help make citizens in the important sense that to be a member of our self-governing society requires understanding its culture, its good as well as its bad actions, and how they made us what we are as a people.

As he should, McClay gives special attention to America’s founding era. Americans’ insistence that they should be allowed to continue governing themselves as they had for well over a century came, not from the mind of some philosopher, but from the concrete experience of self-government in a dangerous land. It made Americans unwilling to accept British attempts to tax them directly and, as important, to seize control over fundamental institutions of political life. As McClay relates, the story of America’s founding begins with insistence on self-rule and culminates in spirited debates centered on practical concerns over economic interests, the requirements of sovereignty, and the dangers of centralized power.

The Constitution itself, along with its crucial, first ten amendments, was the product of both reason and experience. Those who framed it included Benjamin Franklin, John Adams, and, in important, underappreciated ways, George Washington—all of whom are subjects of brief but penetrating character sketches. Each of these men approached the problems of self-government with prudence and a realistic appreciation for the limits of human nature, understanding that “conflict is part of the human condition.” They worked to form a government that would maintain the central role of states and localities in daily life while empowering a new set of federal institutions to protect the truly national interest. The result: a practical document that uses ambition to counter ambition, separating powers among and within branches, and between states and the general government.

In addressing the early republic and antebellum eras, McClay provides an admirably nuanced discussion of Indian conflicts and the institutionalization of slavery, each within their proper context as part of the story of a developing nation driven by creative tension between individual initiative and the formation and continuity of local communities. Eschewing excuses and emotional recriminations, he relates the tragedy of civilizational conflict and economic self-interest, the impact of prejudice and mercy, and the realities of human nature, with its positive and negative aspects. This is no volume of “victim studies,” but neither is it a naïve self-celebration. Instead, it provides readers with insight into the self-conceptions of important actors on both sides of often-tragic events that helped shape the American nation.

Among the dangers to writing (and reading) history are that we will idealize the past as an age of either utter darkness or pure light. The one leads to today’s childish faith that all will be well if only the dead hand of the past is removed from our own presumed wisdom and virtue. The other leads to despair. Both ignore the reality of original sin, the fact of our flawed nature, which dictates that all times will be flawed. They also prevent us from learning from the past, not as a mere source of lessons, but as the wardrobe of a moral imagination—a guide to the good, the bad, and the ugly of our nature and the means by which we can learn to tell each from the other.

In relating events leading up to the Civil War, McClay provides that combination of clarity and nuance essential to understanding the greatest tragedy of our nation. The war with Mexico brought a massive expansion of territory and—what should have been but was not appreciated—massive complications to the balance of cultural and political forces in the young nation. The contradictions of the South, with its semi-feudal, democratic, and openly racist elements, produced an aggressively defensive posture and attitude in dealings with the North and the issue of slavery. And Chief Justice Roger Taney’s overweening hubris (along with the moral cowardice of President James Buchanan) produced the Dred Scott decision, an abuse of judicial power aimed at forcing the North and West to accept a radically a-historical and openly racialist definition of human nature and the rights of the states. All these combined with a deeply flawed “Compromise” of 1850 that undermined fundamental rights of due process throughout the nation in the name of capturing escaped slaves. The result was Civil War. But that Civil War was no more simply a war of Southern racial hatred than it was one of Northern Aggression. And McClay provides an understanding of Southern culture and constitutional issues, as well as Northern prejudice and economic self-interest, sufficient to see the humanity of both sides of the conflict.

Somewhat less successful is McClay’s discussion of post-war attempts to protect freed slaves and bring the union back together. Here he portrays the Fourteenth Amendment in extremely broad terms as applying the Bill of Rights against the states, against clear and overwhelming evidence of the drafters’ intentions. Nevertheless, he provides a balanced discussion of reconstruction itself, its intentions, and its ultimate failure; all of which laid the groundwork for over a century of racial conflict, addressed but not ended by the civil rights movements most prominent in the 1950s and 1960s.

It is in the sections after reconstruction that McClay’s story differs most markedly in its basic understanding from mainstream texts. For, where in treating with these earlier eras enough facts are settled that there is a general outline of independence, conflict, and tragedy, the story from Progressivism through Depression and Great Society has been the exclusive property, in essence, of the academic left as supported by overwhelmingly biased journalistic accounts. Recent re-evaluations of Woodrow Wilson in light of his open racism have done little to alter the general prejudice according to which the centralization and expansion of political power in Washington made possible social justice, stability, and equality previously stymied by selfish corporate interests. So it is especially important that McClay retells the stories of Wilson, both Roosevelts, and Lyndon Johnson in the same balanced fashion as Washington and other greater figures.

The facts of war and economic troubles did not dictate the kind of massive centralization of power instituted under the New Freedom, New Deal, and Great Society. Americans’ abdication of responsibility for their well-being to an administrative state was understandable—McClay tells of the tragedies and privations motivating grand reform movements. But he refuses to simply accept the unquestioned faith in governmental power so prevalent in histories of such issues. Instead, he presents arguments from both sides concerning economic reality and the effects of political centralization on local communities. The result is a full-fledged story, with two sides, and the means by which readers may decide for themselves whether centralization was necessary or desirable.

McClay provides an especially admirable treatment of the Cold War, its centralizing impact on the United States as well as the contested grounds on which it was waged (and resisted) at home and abroad. He then provides a brief discussion of America after the Cold War, introducing readers to more contemporary issues regarding terrorism and cultural change. He wisely declines to enter deeply into issues from the last fifteen years or so for the simple and compelling reason that such issues are not yet “history”; they remain in play among policy makers, the public, and the journalists seeking to influence both for their own ends.

We are in an era of contested assumptions and methods. The “center” of basic self-understanding has not held in America, especially in recent years, as the left has worked ever-more vigorously to fundamentally transform our culture and our very people. So long as we allow our understanding of who we are and whence we came to be shaped by those who reject our story in favor of tales of victimization and a false “science” of humanity aimed at justifying relentless political centralization we will continue losing our young people to ignorance and, worse, rejection of their past. We will continue ceding ever more ground to those who reject America itself as nothing more than a corrupt thing to be subjected to their own selfish and prideful experiments. Publication of this volume may prove to be an important moment in the fight against this trend as it puts in the hands of parents, educators, and the general public the means to understand, retell, and add to their common story.