Nothing More to Prove 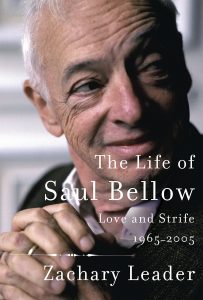 I was hard on the first volume, The Life of Saul Bellow: To Fame and Fortune, 1915–1964, in the June 2015 issue of The New Criterion. Let me summarize the charge sheet: A book promulgated by Bellow’s agent, Andrew Wylie, and as such designed as damage control, minimizing Bellow’s faults as writer and human being that James Atlas revealed in Bellow: A Biography (2000). Leader, it seemed to me, had not shaped his biography very well, shifting too much between different periods of Bellow’s life, telegraphing the future before the narrative could adequately handle it. In short, too many narrative interruptions.

Well, either Leader has absorbed my criticism or I misread him in the first place. The second volume seems to me almost impeccable in its narrative drive, unsparing in its revelations of Bellow’s failings, and most generous to Bellow’s previous biographers, especially James Atlas. In this volume, Leader shows how Atlas drew out various aspects of Bellow’s personality in their many positive and negative contacts. Leader has made splendid use of Atlas’s memoir, The Shadow in the Garden: A Biographer’s Tale (2017).

All of Bellow’s later works get their due, with Leader showing how expertly Bellow crafted fiction out of his biography. A case in point is Leader’s treatment of Ravelstein (2002), inspired by Allan Bloom, famous as author of The Closing of the American Mind (1987), a jeremiad against the college curriculum that no longer took the classics seriously and made possible a culture of relativism and permissiveness. The book became a huge best seller with a great send-off by Bellow himself, who associated many of the ideas in the book with his own lamentations about the chaos of contemporary culture in novels like Mr. Sammler’s Planet (1970). Bellow and Bloom taught together at the University of Chicago and evidently became so close that Bloom encouraged Bellow to write about him. Bellow had to decide whether to write a memoir or a novel. That he chose the latter is not surprising, since fiction gave him the freedom to write a book animated by his friend but not slavishly bound to facts in the manner of biography, a genre Bellow distrusted because it distorted truth by hewing too closely to fact. Only fiction provided a broad enough context to capture a figure as protean as Bloom.

The energy of Ravelstein when Bellow was well into his seventies is impressive, but that is not what many critics wanted to discuss. Bloom, a homosexual, had been discreet about his private life and Bellow had outed him, suggesting, as well, that Bloom had died of AIDS. To considerable uproar from Bloom’s friends and other critics, Bellow confessed some regret about exposing his friend. Leader does not take sides, and in this instance, I wish he had done so. However many resemblances are to be found between Ravelstein and Bloom, they are not one and the same, and Bellow—usually not shy about brushing off his detractors—should have said nothing or struck back. Even a biography of Bloom would not have been Bloom. It would have been a book. That people persist in faulting novelists or biographers for offering skewed accounts of their subjects seems ridiculous to me. What life is not askew? The answer to one biography is another biography, as we have it now with Atlas and Leader and the other Bellow biographers that Leader never forgets in his honorable narrative.

Implicitly Leader provides a rebuttal to those who decry Bellow’s use of friends and others to create his characters. Leader shows that some of Bellow’s friends were flattered by the literary uses he made of their personalities. They became more interesting, more pointed, more dramatic, than they thought they were, born anew as Saul Bellow characters. Which is to say that fiction, however much you want to string it to real-life models, is still fiction.

Bellow reminds me of a very different novelist, Anthony Powell, who constantly put the résumés of his intimates and acquaintances onto the pages of his glorious A Dance to the Music of Time, a series of twelve novels that chart a good deal of twentieth-century history, much as Bellow’s works do. Bellow goes Powell one better, I think, because of the Bellovian play of ideas. He took ideas seriously, but he also treated them comically, and drew back from commitment to positions—not because he was a gadfly, as some supposed, but because of his understanding that ideas take you only so far and cannot be separated from personality and character.

The most moving passages of Leader’s biography are the many scenes of Saul Bellow in old age, trying to come to terms with his five marriages and the sons who remained in certain respects bitter because he was not there for many of the crucial events in their lives, and was closer to novelists like Martin Amis and Philp Roth as sort of adopted sons, than to his biological offspring. Bellow acknowledged his derelictions of duty, but in his ill-tempered moments he remained wounding and unforgivable.

It was different with Bellow’s last marriage, in which his wife, Janis, more than four decades younger than her husband, learned not only to accept but to manage his vagaries, as well as providing him with a daughter when he was well into his eighties. This final marriage changed Saul Bellow, although Leader does not say so in so many words. Did Bellow become more tolerant because Janis showed him the way? She was the first wife to have the resilience and intelligence to master him in all his moods, although that is not to blame the other wives for not doing so. It was a matter of timing and temperament, I think. The patient and resilient Janis came along at just the right moment when Bellow was musing over his earlier failures in love and child rearing.

Bellow gave his biographer a gift. At the very end, even with dementia that can turn to anger, he became, for the most part, kind and gentle and generous, continuing to teach—oh how he loved the contact with young people over six decades in the university. I suppose he finally understood he had nothing more to prove and could open himself up. He needed no defending, or rather Janis was there to play defense if required.

In the end, Zachary Leader has produced one of the most inspiring biographies of an American writer, of a caliber that we are not likely to see again for quite a long time.