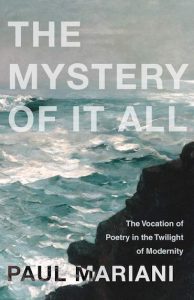 The Mystery of It All: The Vocation of Poetry in the Twilight of Modernity
by Paul Mariani
Paraclete Press, 2019
Paperback, 240 pages, $25

There’s a moment in ordinary time when Dr. William Carlos Williams writes of passing a young housewife, “at ten AM,” noiseless, the wheels of his car “rush with a crackling sound over / dried leaves.…” She has come to the curb, “shy, uncorseted, tucking in / stray ends of hair.…” He compares her in ordinary time to a “fallen leaf.”

One could call it ordinary time not because it’s common but because it’s ordered watchfulness, and the poem reinforces this impression. It’s also a short lyric usually understood as having no context, no other information, other than she is “young” with a routine schedule.

I’ve read analyses of the poem, however, suggesting that the “subject” is that of male power versus female powerlessness. Maybe so, but if so the poem weathers in disappointment, and likely misses the allusions to death, the bawdy ice-man, to life, the fish-man, and the young housewife compared to a fallen leaf, Eve in another incarnation and blessedly so.

I mention this as a “preface” to Paul Mariani’s The Mystery of It All: The Vocation of Poetry in the Twilight of Modernity.

Having briefly prefaced, there’s another question and that is whether or not the poem is beautiful and thus not only a rich secular classic and true but also imaginatively pointing to something more transcendent, radiant with love and caring, and by a poet dogged in his faith in mystery. More so, how could someone with profound faith in the radical idea of the Incarnation and all the assumptions of the Logos so read the poem as something “hallowed” in “ordinary time”?

To do so would be to argue that this Williams poem owns an unfolding drama of existence the essence of which is a re-enactment of an underlying story Christian in its mystery. If that were not the case, we die miserably … for lack of the news found in poems.

Paul Mariani has spent the past fifty years of his vocation writing the lives of major poets like Williams, Berryman, Lowell, Crane, Stevens, and Hopkins while becoming also a major poet in his own right. His generous literary mind combines to guide the reader along a pilgrimage, never holding back what is most dear to him: the mystery of it all, Hopkins his touchstone.

It’s a slim book that begins with Mariani’s commentary on his own longings for “self-realization,” a pursuit of words leading to a final resolution. He’s nearing eighty these days and as the years push forward, and with friends dying or in hospitals or hospice, surely so many years deserve a commentary if not a summary.

There’s an extraordinary bounty here but the underlying theme in this commentary, this commentary and summary, might be found in a quote from Wallace Stevens, his “Of Modern Poetry”: “The poem of the mind in the act of finding / What will suffice.” What can one find in a passing moment that will comfort and what will suffice, Mariani writes, has become the vocation of the Catholic poet today, the Christian writer.

This book, much like a memoir, drifts back over department meetings, Boston College and then earlier at the University of Massachusetts at Amherst, the going round of things, the hot topics disappearing with the passage of years. But for him, for Paul, raised as he writes in the great tradition, the classics combined and expanded his “vocation” which is much like the bracing presence of Flannery O’Connor who pushed hard against the age that pushed against her, the skepticism of an age disavowing disbelief in a Catholic imagination as so much “beeswax … dressed in crinoline.”

It began early for Mariani, his dissertation, a commentary on Hopkins’s poems that reads much like a biography, and then an assistant professor with no more thought of writing a biography than walking on the moon. Teaching Modern American Poetry and under the spell of that poet from Paterson, which led to a commentary on Williams’s critical reception from the beginning through 1975 and then a book on his epic poem, Paterson, that was stillborn, but it was all what one might call “finger exercises.”

In 1981, his biography on William Carlos Williams was published and Mariani found himself on the front page of the New York Times Book Review and, as he said, thought of himself as cock of the walk and no longer just an assistant professor.

Who among the academic crowd has not felt just the same?

An earlier book of poems, Timing Devices, with superb wood engravings by Barry Moser, and first poems, “finger exercises” again, with titles like “The Dump,” which ends in ordinary time but with a summarizing mystery to it all: “It came / to a kind of prayer, this sort of order. / One could find God in the rankest of places.”

Then more poems. Crossing Cocytus, Prime Mover, Salvage Operations, The Great Wheel, and so on to the most recent, Ordinary Time, published this past year.

And in 2019, in humble recognition for fifty years of achievement, the inaugural Flannery O’Connor Lifetime Achievement Award at the Catholic Imagination Conference held at Loyola University in Chicago.

The mystery of it all.… Spiritual exercises.… In the footsteps of St. Ignatius.

Which does not beg a question but poses the question: How does one chart the parabola of a lifetime’s work in a balanced, illuminating, and enlightening way?

Well, Dante for certain has been one of Paul Mariani’s angelic guides, if that’s not too hyperbolic. Recall, though, the moment in “Paradiso” when Dante for what is just a moment in what is not ordinary time looks back and sees the whole of history unwinding like some kind of providential ribbon, and smiles in understanding: the mystery of it all clear in one clairvoyant moment.

Mariani writes in chapter seventeen, “In The Footsteps of St. Ignatius,” how “he grew up with legends like these, at which in truth the modern mind balks.” That was at an earlier age, but now that experience “has been replayed for [him] with a clarity that haunts and astounds.”

One could go on but perhaps it’s best to return to the beginning and know the place from which we started from in ordinary time.

That housewife: The image is not one that burns always with a hard gem-like flame. To come upon the poem is to come upon an image of the Blessed Mother, which is to come upon in our own time with the doctor in his car who becomes a hero “in his time in terms that all but name the presence of Christ.”