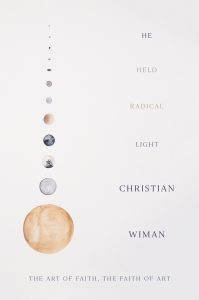 Fewer than twenty pages into Christian Wiman’s slim and personal He Held Radical Light, he is sitting in a New York hotel room “bald and blasted from cancer treatments” and miffed by an interview on faith and poetry that he has just given. “It wasn’t so much the substance of what I said that unsettled me,” he writes, “as the ease with which it had come to my tongue. Chekhov once said that after a writer reads a work to an audience, all he can do is bow smilingly as he backs out of the room. Everything else is extenuation, attenuation, lies … I felt that I had been caught standing at a podium past my time.”

It’s hard to speak or write well about poetry, and doubly so about poetry and God, particularly in America, where the ubiquity of religious discourse transforms every attempt into a cliché. There’s something almost immediately vapid, isn’t there, in referring to a poem as a “prayer” (a conceit, alas, I have used myself) or in noting an artist’s “redemptive” use of this or that material? Terms like “incarnation” or “presence”—both good words—have become nearly useless with respect to poetry because of overuse, making poetry into a pill of mild euphoria to be consumed on a gloomy Saturday morning. Never mind that both God and poetry can be terrifying, as they speak judgments against us or converse with Hell’s demons.

Wiman mostly avoids this problem in He Held Radical Light by sticking to the language of individual poems and anecdote. The volume is a sort of sequel to My Bright Abyss, Wiman’s literary memoir on his return to faith following a cancer diagnosis, and like in My Bright Abyss, he shifts between episodes from his life and glosses on a handful of poems. The conversations with living and late poets, recounted with kindness and humor, are one of the real pleasures of the volume. Wiman recalls, for example, walking in downtown Chicago with the poet Mary Oliver when she suddenly “stopped and picked up a piece of meat. At least that’s what I thought at first. When she spread the gray-red mess out on her hand, you could see that it was, or at least had been, a bird. A pigeon, in fact, which she proceeded to describe with avid eyes and intelligent touch … Then she stuck the bloody bird in the pocket of her jacket and walked on.” There’s an uncomfortable lunch with C. K. Williams, a trip to see Donald Hall in New Hampshire, and a last visit with the late poet Craig Arnold. Mingled with these remembrances is Wiman’s account of what it was like to run America’s most prestigious poetry magazine for ten years and what he learned along the way. (Here’s one thing: Not all great poets “make it” or are even published. “Chance and power play a large part, and I feel sure that some genuinely great things fall through the cracks—forever.”)

But this is also a serious book. The subtitle of the volume is “The Art of Faith, the Faith of Art.” It is the latter that concerns him most. In My Bright Abyss, Wiman had asked, “What is poetry’s role when the world is burning?” His answer in He Held Radical Light is that poetry articulates the “reality of the self” and, at the same time, “a larger reality” from which the self “takes its existence and to which it will inevitably return.” Good poems, in other words, are a testament of what is and will be. This is how Wiman puts it:

I love long thought—because I have long felt—that the perfections of art implied or even anticipated some ultimate order one need not call God, but could call out to nonetheless; that a feeling that found its true form could align the heart with the stars, make of remote and implacable matter a mirror in which subject and object might see, and even be, each other.

This, for Wiman, is the “faith” of poetry—it tells us that we are not complete and that poetry, though consolation it may be, cannot provide this completion. A work’s “true end is elsewhere,” Wiman writes; “there is some other needed to fulfill its nature.”

Wiman differs in this respect from most modern poets, who, following Wordsworth, tend to see poetry as an activity that reconciles subject and object, spirit and matter, even if that reconciliation is momentary. In The Prelude, Wordsworth hoped to discover and make visible that “Invisible workmanship” that holds all things together. Stéphane Mallarmé claimed that his long poem, “One Toss of the Dice,” which was to be part of an even larger work he called The Book, had “laid the foundation of a magnificent work” that would “explain all earthly existence.” “I am dead and resurrected,” he wrote the poet Théodore Aubanel in 1866, “with the jeweled key of the ultimate treasure chest of my mind.” He never finished The Book.

For most of his life, Wallace Stevens suggested that poetry resolved inchoate things into a form that provided a momentary (if ultimately fictive) sense of harmony. But in his late poem, “Final Soliloquy of the Interior Paramour,” he wonders if this capacity to “collect ourselves … into one thing” is part of the “miraculous” work of a “central mind.” “How high that highest candle lights the dark,” he concludes,

Out of this same light, out of the central mind,
We make a dwelling in the evening air,
In which being there together is enough.

Wiman only mentions Stevens in passing (He Held Radical Light is named after an A. R. Ammons poem), but he’d probably quibble with that last line. Being “there” together is not “enough,” he might argue, if “we” means only each other, and if “there” means only in the poem. “The real issue,” Wiman writes, “for anyone who suffers the silences of God and seeks real redemption, is that art is not enough. Those spots of time are not enough to hang a life on.”

For Wiman, poetry points to a moment of reconciliation of subject and object beyond itself when our soul is restored to its proper relationship to God or is obliterated—which, for Wiman, may be the same thing. “Oblivion is one truth,” he writes, “devouring us and everything we love. Heaven is the same truth, seen by the light of timelessness.” In a gloss on John Polkinghorne’s remark in Questions of Truth that “God could bring into being a new kind of ‘matter’ with such strong self-organizing principles that the drift to disorder would no longer happen,” Wiman writes, rather, that “we might be a form, or part of a form, whose fruition, for now, we can intuit but not inhabit—that heaven and oblivion might have one name.” Heaven is not the continuation of the self eternally (“heaven too often turns out to be little more than projections of the precious self ad infinitum”), but perhaps a new life in the mind of God. “That we might be remembered,” Wiman writes, “what an almost impossible thought that is.”

Wiman goal’s here, as he notes in a gloss on A. R. Ammons’s “Hymn,” is to point out that the self’s continuity (whatever form that continuity takes) requires the self’s death—and that poetry states this requirement again and again. “I know if I find you I will have to leave the earth,” Ammons begins the poem—a sentiment, Wiman argues, that despite Ammons’s pantheism is gospel truth. “There is no religious paradox here,” Wiman continues: “‘When Christ calls a man, he bids him come and die,’ wrote Bonhoeffer famously, who was echoing Christ himself, who in all three of the synoptic Gospels says that salvation lies in, and only in, loss.”

This focus on oblivion may also be a rhetorical move. In My Bright Abyss, he states in a comment on Simone Weil that modern believers connect to God by inhabiting “those elements of our existence that seem inimical to his: limitedness, contingency, suffering, death,” hence the focus on oblivion in both works.

Still, I found Wiman’s preoccupation with oblivion in He Held Radical Light a little odd on occasion. Poetry is certainly preoccupied with unity, but it is also preoccupied with things—real gardens and real toads, to riff on Marianne Moore a little. Poetry is chockablock with the strange and varied life of things. Talk of the afterlife in Christianity, Wiman writes in My Bright Abyss, “seems absurd to me.” Fair enough, but I think we may be losing something by making it somewhat less absurd, somewhat too neat, as Wiman does in He Held Radical Light.

Still, this is a rewarding book—one of the best on poetry and faith in recent years—and I hope it won’t be Wiman’s last.