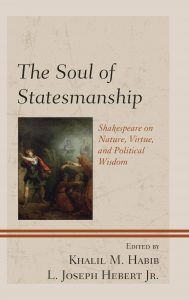 The statesman is a rare beast. Who among them come readily to mind? Pericles, Cicero, Bruni, More, Madison, Disraeli, de Gaulle. Surely there are more. But even an intensive study of statesmanship treats the genuine statesman as the exception, not the rule. This raises a fundamental question for statesmanship in our own and any age: What is it? And how do we educate genuine statesmen?

Answering these questions is the focus of a new volume of essays, The Soul of Statesmanship: Shakespeare on Nature, Virtue, and Political Wisdom. The editors, Khalil Habib and L. Joseph Hebert Jr., make a striking and important argument, one that works against our own technocratic age of public administration degrees and cable news pundits. They argue that poets are teachers of statesmen. The poet of concern in this volume is, of course, Shakespeare. This review will define two key terms—statesmanship and poetry—before focusing on two of the essays here that illuminate their relationship .

Although it is a book on statesmanship, the volume leaves the term mostly undefined, though obviously not unexplored. Yet a definition of the term will be useful for understanding how Shakespeare intends to educate statesmen, both in his plays and in the real world.

For Cicero, the principal virtue of the statesman was honestas, or honorableness. In De Officiis, Cicero defines the four parts of honorableness: “the perception of truth … , preserving fellowship among men … , the greatness and strength of a lofty and unconquered spirit … , [and] order and limit in everything that is said and done.” A statesman is that person of sociability, virtue, and self-restraint who sees reality clearly and promotes fellowship and the common good among the citizens.

But why is poetry the prerequisite for genuine statesmanship, and why is the poet his most important tutor? The editors suggest that “the chapters in this volume support and illuminate this connection between Shakespearean drama and politics by examining a matter of central concern in both domains: the human soul. Since man is defined by his intellect and passions, no coherent account of human action is possible without careful consideration of the complex relations of thoughts, beliefs, desires, and habits to the decisions leading to success and failure in the personal and political spheres.”

According to Bl. John Henry Newman, poetry teaches one how to love in the midst of the complexity of the human soul: “Poetry,” he writes, “does not address the reason, but the imagination and affections; it leads to admiration, enthusiasm, devotion, love. The vague, the uncertain, the irregular, the sudden, are among its attributes or sources.” Poetry draws on the complexity of human life and points us, in the midst of its vague uncertainty, to love it nonetheless. Thus, a poetic education is an education in loving the reality of things as they are, including the often “complex relations of thoughts, beliefs, desires, and habits” that define human life.

Two essays in this volume demonstrate the notion of poet as teacher of statesman. In particular, the contributors illuminate how Shakespeare the poet-playwright constructs dramatic scenarios in which the statesmen characters either fail to love properly or learn to love properly. In doing so, the contributors argue that through poetic drama Shakespeare is educating real-world statesmen in the proper ordering of love and the attainment of wisdom.

We learn from Timothy Burns’s essay “‘One That Loved Not Wisely But Too Well’: Devotional Love and Politics in Othello” that the tragedy is set in motion in part by one man’s rejection of love. Burns writes that Iago the cynic “claims that what is called love—that is, erotic love, the love that Roderigo feels [towards Desdemona]—is no more than a temporary beguilement, an offshoot of lust, of selfish carnal desire.” When Roderigo, who is despondent over Desdemona’s marriage to Othello, replies that he loves Desdemona for her virtue, Iago replies: “Virtue? A fig!” According to Burns, “love, [Iago] suggests, is merely lust, with a permission of the will, and a real ‘man’ does not give that permission, but acts rationally; a selfish, calculating interest rules his soul.”

Burns argues that Iago’s cynicism—his refusal of genuine love—drives him to the destruction of those around him, including Othello, Desdemona, and his own wife, Emelia. “This eschewer of devotional love,” Burns writes, “hates Othello and Desdemona as living refutations of his own life. Othello and Desdemona represent for Iago the possibility of serious love,” a possibility that the man who loves only himself and his own power cannot admit. Burns shows us that if Iago is to destroy Othello he must operate as the anti-poet: the cynic who undermines love for his own gain.

In Othello, the subversion of love results in chaos in the city. Because love is not properly ordered towards wisdom, the characters fail to see reality clearly—in Othello’s case, the reality of his wife’s virtue. Becoming unwise, they destroy themselves and those around them.

In contrast, Luigi Bradizza’s essay, “Christian Ethics and Political Moderation in Shakespeare’s Measure for Measure,” offers a reflection on properly ordered love. In the play, the city of Vienna is overtaken with licentiousness. Angelo, deputy to the Duke, has taken responsibility for governance of the city in the mysterious absence of the Duke. A celibate, Angelo tries to enforce a strict virtuosity on the people in order to make them continent, projecting towards the city the sexual mores of his own soul. In Bradizza’s reading,

Angelo has not eliminated his sexual desire; he has instead unnaturally submerged it. The Duke understands that Angelo’s political harshness toward illicit sexual behavior is a consequence of Angelo’s soul rebelling against his celibacy. Angelo seeks to reproduce outwardly and visibly in Vienna a condition he wishes internally and invisibly in his own soul: sexual virtue, understood as the absence of sexual desire in his soul, and as the absence of visible lust in Vienna.

This kind of strict moralism is of course impossible, and doomed to fail. According to Bradizza, as a result of his “unnaturally submerged” desire, Angelo has “increased the likelihood of these passions when he is presented with an object for them,” which he is in the person of Isabella. Indeed, his lust for Isabella, a novice nun, compels him into an attempted seduction. Through a bed-trick, he mistakenly believes that he has committed fornication (a crime which he has vowed to enforce with the punishment of death) with Isabella. He in fact committed fornication with Mariana, to whom he was previously betrothed.

By teaching political wisdom, including moderation and mercy, Bradizza argues that Shakespeare turns our mind to the realities of human life, including sexual desire. The key is not to stamp out such desire, but to elevate it: “The Duke is able to repair the damage of sexual transgression by means of marriage. Shakespeare is thus able to give us a happy ending,” Bradizza writes, by marrying Angelo and Mariana after all. Why marriage? In the Christian spiritual realm, marriage is a divinely ordained union of man and woman, a sacred bond that imitates in some way the bond of love that unites man and God, especially through procreation. Without undermining this reality, Shakespeare points us to the political importance of marriage. Here is Bradizza: “In the absence of marriage, the play points to at least two grave problems that result from sexual union: venereal disease and fatherless children.” Fornication “spreads disease and impoverishes women and children.” It thus presents a political problem, one solved in Measure for Measure through the “penalty” of marriage. Properly ordered love results in marriage—and wisdom—whereas lust results in personal and political chaos.

Bradizza’s reading of Shakespeare is profoundly poetic. Only though properly ordered love—Angelo controlling his own lust, and wisely seeing the reality of the human condition—can the statesman exercise moderation and mercy. Too unrealistic expectations about the possibility of human nature lead to draconian laws. Given human nature, politics should not attempt to enforce perfect virtue, and should not establish cruel and unusual punishments for the violation of virtue. Politics should thus be moderate in its aspirations for the perfection of human nature and merciful in its reckoning of human failures. That is not to say that virtue cannot be encouraged, for it must be. One way politics can encourage virtue is by redirecting vice (in this case, fornication) into virtuous action (marriage).

In these two accounts, the tragic Othello and the comedic Measure for Measure, two authors in this volume lead us to the same insights from different directions: love must be properly ordered; statesmen must help order love in the city; only wise statesmen, themselves free from passions and prejudice, can properly order love; the poet, who sees the complexity of human life, teaches the statesman to be wise by ordering love towards wisdom. Both essays—in fact, each essay in the volume—consider in some way, implicitly or explicitly, the absence or presence, perversion or ordering, of love.

The essays thus lead us to ask questions about our own American regime and the possibility of genuine statesmanship in our own society. Do our ruling elites have properly ordered loves? This is of course hard to tell, though in some limited way you can judge a person’s soul by their actions. People who chronically engage in extramarital affairs clearly do not have their love properly ordered. Do they tend to love their fellow citizens, or cast them off as deplorable and thus ungovernable? Do they exercise moderation in their hopes for political action by acknowledging the realities and complexities of human life? Or do they try to remake citizens to fit their own ideological molds? Do they seek to understand the real desires, confusions, failures, and hopes of the people?

A poetic education is of course not reserved for statesmen, and indeed, in a democratic republic, should never be limited to them. The people themselves must be educated in poetry. However, as Cicero teaches, one of the principal duties of the statesman is to promote friendship, and thus love, among the citizens, and to properly order their loves. If a statesman is not properly educated in love, what are the prospects that the citizens of the regime will be? One must know how to love in order to encourage others to love. Because politics requires love, and because love is the first principle of poetry, poetry must be at the center of a political education. The editors of and contributors to The Soul of Statesmanship are true philosophers—they see this reality clearly. In our age of the anti-statesman, we all, statesman and citizen, must heed their advice: Put down our devices and pick up our Shakespeare.

Christopher Fisher is executive director of the Portsmouth Institute for Faith and Culture and teacher in the Department of Humanities at Portsmouth Abbey School in Rhode Island.