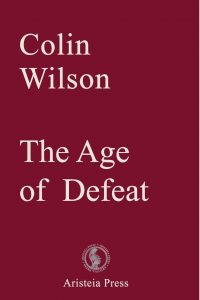 The Age of Defeat
by Colin Wilson
with an introduction by Thomas F. Bertonneau.
Aristeia Press, 2018.
Paperback, 243 pages, $15.

This handsome new edition of The Age of Defeat is complemented by Tom Bertonneau’s excellent introduction. Originally published in the 1950s, Wilson’s analysis of the sorry state of the modern novel still holds true. Modern movies, television, and novels continue to be permeated by nihilism and hopelessness—Wilson’s “defeat.”

The Age of Defeat asks the question why modern writers seem incapable of having an actually heroic main protagonist. As Bertonneau has pointed out elsewhere, just about the only exception to this state of affairs is so-called “genre” fiction such as science fiction or the fairly execrable Marvel movies, aimed at those with limited cultural context or a tolerance for the crass and bombastic. Until the recent past, science fiction—essentially concerned with theological and philosophical issues despite the “science” moniker—often managed to escape defeatism. Most modern science fiction on screen, however, has now turned into one blue/grey tinted dystopia after another.

Wilson is careful to explain that his notion of “hero” does not refer to some warmed-over simplistic model from the past; never mind the literally cartoonish Marvel heroes, we might add. He argues that the contemporary writer needs to reimagine an appropriate conception of the heroic in an act of transformative imagination. In this regard, Wilson at times refers approvingly to Marcel Proust’s heroes who explore extreme nuances of memory and feeling—each a hero of inner space rather than a swashbuckler.

Wilson is particularly annoyed by the antiheroes of Aldous Huxley who are all hideously ineffectual and limp, seemingly reflecting some defect in Huxley’s own character. Also frequently mentioned are Jean-Paul Sartre and Albert Camus. They too tend to write only about the defeated. Exceptions include Orestes in Les Mouches who does what he thinks is right despite his choice dooming him to being plagued by the Furies in the form of flies. Sartre, he writes, emphasizes “choice” and action, yet gives no guidance on what to choose, while his political choices seem to indicate his own moral vacuity.

René Girard writes in Deceit, Desire, and the Novel that all great novels end the same way, with the main character, often tortured by the author, ultimately coming to see the error of his ways in his final moments. Examples given include Madame Bovary, Julien Sorel, and Don Quixote. This represents a self-overcoming and reconciliation on the part of the author, Girard suggests, where the writer recognizes himself in his hated protagonist and comes to forgive the character in an act of personal transcendence. Wilson notices the disparagement of Don Quixote by Cervantes and the way Quixote’s heroic quest is treated as a madness, but he does not mention the ending. The real heroism comes, Girard argues, in Cervantes’s act of self-recognition, insight, and love when Don Quixote renounces and confesses his madness—both character and author overcoming the obstacles and limitations of the human heart. This is the kind of thing that Wilson seems to be waiting for from the modern author.

Love, faith, and hope are largely absent from modern novels, each of them key features of a healthy religious worldview and important ingredients in the kind of optimism Wilson is wanting. It is thus a little puzzling why Wilson does not hold up the absence of belief in the divine front and center to explain the death of the novelistic hero. This might be because Wilson was only coming round to this recognition himself, or it might be because he wants the reader to draw his own conclusions using the hints he provides.

Modern authors instinctively shy away from heroes perhaps because, as literal or functional atheists, they find heroism too hard and perhaps intuit the whiff of religion heroism implies. Heroism requires a transcending of normal limitations and instincts for self-preservation—and it needs space. There needs to be some intuition of depth, of an area to expand into and explore; a place of mystery where dragons lurk or the heavens can be accessed, for heroism to exist. This kind of space is depicted in a visual artistic medium by painters like those of the Hudson River School. It is easy to imagine the hero’s journey in their vistas. Hence, perhaps, genre writers’ frequent interest in outer space—a metaphor for the inner.

Wilson complains of the cult of the ordinary man. With the modern insistence on equality and a suspicion of hierarchies of qualitative differences, the ordinary man becomes something authors want to celebrate. But celebration and mediocrity are mutually exclusive. Wilson refers to the pitiful Willy Loman in Miller’s Death of a Salesman, who is such an ordinary everyman. Finding nothing to rejoice over in such a person and his circumstances, the play devolves into the expected nihilistic despair. This last matches the mood of the grumpy adolescent who feels sure that his own hormone-fueled misery and juvenile bewilderment is shared by all humanity and who regards facing the meaninglessness of existence as engaging with “truth.” All consolations of God and hope are thus seen as escapism and avoidance—hence the predilection of many younger people for writers like Nietzsche, and the close adherence to such a type by nearly all modern writers. (Bucking the trend, the recent Coen Brothers movie Hail, Caesar! ends with the word “faith,” in a strangely pro-Christian context, being shouted by multiple people when the idiot Baird Whitlock, played by George Clooney, forgets his lines.)

Arthur Miller is just one of the American playwrights mentioned as having nothing much to offer us. The English D. H. Lawrence and Lady Chatterley’s Lover is also a frequent foil of Wilson, who notes Lawrence’s proposal that sex offers some larger meaning and purpose. This, of course, is no solution.

Wilson sees Dostoevsky as someone who could depict heroes. It is relevant that Dostoevsky’s characters are capable of self-transcendence, self-overcoming. This creative ability of Dostoevsky is related to his religious intuitions and faith. Wilson agrees that Dostoevsky is perfectly capable of exploring and depicting the utter depravity of humanity, the full misery of circumstance and callousness in the way one person treats another in a manner that any Nietzsche-loving adolescent, or Arthur Miller fan, should appreciate. But Dostoevsky also offers hope, and this hope does not seem possible without religious faith.

James Joyce’s Ulysses is described in both critical and somewhat flattering terms. The latter is surprising since Ulysses seems unmitigatedly bleak. Likewise, Wilson claims to find moments of beauty in Sartre’s Nausea despite objecting to the novel on multiple levels.

References to The Organization Man and The Lonely Crowd are most interesting. The dichotomy between the other-directed person, who cares mostly about what other people think about him and about social prestige, and the inner-directed person who follows his own interests without regard to fashion or social approval, is well-developed and intriguing. However, Wilson regards the authors of both books as better at diagnosing the problem than in offering a solution.

The Age of Defeat makes a convincing case that the cult of the ordinary guy is a dead end. Human beings need something to admire and to which to aspire. Readers want a way out of quotidian misery and banality, and the “serious” non-genre novelist thinks it beneath him to provide this, finding the heroic corny.

Wilson could make more of the connection between the loss of religious convictions and the death of the hero. The Age of Defeat gently alludes to this conclusion, or perhaps could be said to gesture towards it. Perhaps, as suggested above, Wilson prefers to let readers reach this understanding on their own rather than pushing it too hard.