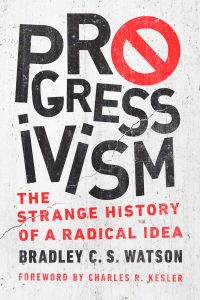 Just who were the original progressives of a century ago? They reached all the way from Social Gospelers to middle-class businessmen, urban reformers to clean-government types, efficiency experts to settlement-house dwellers. Or were they also former populists? Muckraking journalists? Suffragists/feminists? Were they simply somewhere under the tent of Teddy Rooseveltian Bull Moosers, or somewhere within the circle of Woodrow Wilsonian intellectuals?

James C. S. Watson argues that despite this profusion of “progressives,” there was a recognizable progressivism. All of his—and this movement’s—types ultimately belong in the same corral. No matter their specific concern, interest, or obsession, his subjects had something important in common. At first glance the something he has in mind might seem to have little to do with this or that progressive reform proposal or measure. And yet that same something ultimately had a great deal to do with the entire thrust of modern progressivism.

The something that defines Watson’s corral brings us directly to the subtitle of his book: “the strange history of a radical idea.” Actually, this history is more hidden than it is strange. Or, if not hidden, it has at least been ignored. More on that in a minute. Let’s first consider the radical idea. The idea Watson has in mind was one the progressives put forth, intent upon subverting another radical idea—or at least an idea that was radical at the time of the American founding. That idea was that citizens had God-given natural rights that precede government, rights that a government is then instituted to preserve rather than create.

The original progressives of the early twentieth century had a different idea. More than that (or should that be “worse than that”?), they had what they thought was a better idea: government could—and should—create new rights of both an individual and collective nature. God was at the sidelines, or out of the picture entirely. But what Watson has given us in this book is less a history of this progressive idea than a history of its history. It is in that sense more a valuable historiography rather than a history.

Watson needs to set the historical stage before setting out to explore the thought and writings of progressive-minded historians on the subject of progressivism. He might have begun with the Founders themselves. Instead, his starting point is Abraham Lincoln. Watson positions his Lincoln as the president who looked back to the Founders, rather than a Lincoln who links the Founders and progressivism.

Watson’s Lincoln was “profoundly wary of the notion of progress: “Evolution and growth were not part of his political vocabulary.” The prime role that Lincoln defined for government was the same role Jefferson had asserted, namely the task of protecting the “pre-political rights given us by the Laws of Nature and Nature’s God.” Having aligned Lincoln with the Founders, while severing him from the progressives, Watson explains that progressivism took off on its own beginning after Lincoln, in the late nineteenth century. That leap, he contends, was the first of a series that have continued, almost without challenge or interruption, until, well, until relatively recently, historically speaking.

The heart of that recent challenge has come from the Claremont Institute and the Claremont Review of Books, whose editor, Charles Kesler, has written an introduction to this book. If Kesler is the current father of this important effort, Harry Jaffa is the intellectual grandfather, and Bradley Watson is one of the grandsons. Here is Watson’s summary judgment: “American political thought subsequent to Lincoln has, for the most part, amounted effectively to an attack on Lincoln’s conception of American constitutionalism.” That attack, of course, was also being waged against the Founders themselves. But as Watson sets the stage for making his larger argument he wants it understood that he has Lincoln on his side. And the heart of his argument is this: the ongoing and all-too-successful progressive redefinition of the Constitution represented a decisive shift away from better than a century-long national commitment to the original understanding of the document and its seamless union with the Declaration of Independence.

At this point in the book, Watson is still not ready for a full-bore foraging through the works of historians of American progressivism. Just a bit more stage-setting must be done first. The lead figure here is Charles Darwin, but Watson introduces a much larger group advancing the progressive project, including John Dewey, Herbert Croly, Walter Rauschenbusch, and Charles Beard, not to mention two very engaged progressive presidents: Theodore Roosevelt and Woodrow Wilson. Conventional wisdom has it that the only American Darwinians of any consequence in the late nineteenth century were anti-government, laissez-faire Social Darwinists. Not so, contends Watson. In truth, the most consequential Darwinians were evolutionary-minded progressives for whom there were no fixed principles and no eternal truths. Everything was in flux. Everything was inevitably evolving. Everything was experimental, or to be experimented with, including something that was suddenly being called the “living Constitution.” And of course everything was then thought to be moving in the general direction of something called progress, even if progress was not something that could (or should) be precisely defined.

As it happened, the progressives’ understanding of progress had a great deal to do with enhancing the power of the state. Faithful Darwinians, such as John Dewey and Herbert Croly, saw to that. But another kind of faith figured into the equation as well. That would be the redefined Christian faith of such figures as Rauschenbusch and the Social Gospel movement that reconfigured heaven to be located somewhere on earth. All of this serves as a necessary prelude to the heart of the book, which is a history of the historians of progressivism. It is this history that brings us back to the hidden history of the progressives’ radical idea. More to the point, it brings us back to a history that was so hidden that its readers—and perhaps even its authors—did not fully realize just how radical the original idea was.

The one major exception to this is Charles Beard, author of An Economic Interpretation of the Constitution of the United States. His was an attack on the Constitution and those who drafted it that was at once undisguised and timely. It was timely in that it dovetailed nicely with those progressives who were bent on denying the timelessness of the Founders’ efforts. In a sense Beard and his fellow progressives sought to demonstrate that the Founders were themselves devotees of a living constitution of sorts. After all, Beard was convinced that their handiwork was designed to do little more than benefit themselves.

Watson takes us through multiple post-Beardian generations of historians of progressivism. More specifically, his focus is on progressive historians and their various takes on the original progressives. Watson finds a great variety of interpretations amid a great variety of progressive personalities and agendas. But he also finds that something is missing. What’s missing is an awareness that the entire progressive project constituted an attack on the Constitution. Was that lack of awareness purposeful or accidental? While Watson offers no tentative or definitive answers, it’s safe to surmise that some combination of the two was at work.

That said, neither Roosevelt nor Wilson hid what they were about. During the coal strike of 1902 TR threatened a federal takeover of the anthracite coal industry, while bellowing “to hell with the Constitution” when people needed coal. Speaker of the House “Uncle Joe” Cannon was not fooled: “Roosevelt’s got no more use for the Constitution than a tom cat has for a marriage license.” Wilson was more discreet: The out of date “Newtonian” contraption that was the original Constitution simply had to give way to a more “Darwinian” model. But for too many years progressive historians ignored the “radical idea” at the heart of the progressive project. They also ignored a genuine missing link. That would be the link between the Declaration of Independence and the Constitution.

Put simply, Beard was not only wrong to see the Constitution as little more than an economic document, but wrong to regard that document as a conservative refutation of the Declaration of Independence. Rather it was designed to create the very structure of government best able to guarantee our pre-political God-given rights. Watson concludes his historiographical excursion by examining the works of recent historians who share his suspicions of the progressive project. Many, but far from all, are products of Claremont. Their influence at this point is small, but growing. Perhaps they can take heart from those early progressives under consideration here. After all, who knew that they could eventually overturn a century of constitutional permanence and consistency? And who knows today? Maybe we’re on our way to a return to limited government.

John C. Chalberg is retired from a career of teaching American history at a Minnesota community college where the ideas of too many of Watson’s targets crept into too many of his lectures for too many years.