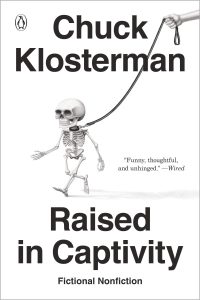 Ideas are dangerous. Most people would agree that a certain level of danger and harm can take root in ideas. Culture, too, is dangerous. This concept becomes a bit more delicate as many wish to err on the side of relativism. Sensitivity and open-mindedness in and of themselves are not evils, but should we wonder if we have reached a place of complacency due to decadence and other determinant factors? One does not need to be counter-culture to examine popular culture and vice versa. However, one does need a sense of awareness in relation to the past, present, and future of culture. Evaluation and examination do not have to take place in ivory towers or designated centers of higher thought and learning—the Academy, lately, appears to be more concerned with ideologies and agendas, rather than liberal dialogue between groups and individuals. In the event that this is true, should we begin to seek out other sources of discussion with regards to culture and other aspects of society?

Every year, since 2009, there takes place “The Festival of Dangerous Ideas” in Sydney, Australia. It is committed to bringing debate and critical analysis between leading thinkers and culture creators around the globe. There is no ideological agenda as the festival has seen the likes of Christopher Hitchens, Cardinal George Pell, Lenore Skenazy, Julian Assange, Peter Hitchens, Germaine Greer, Sir Salman Rushdie, Sam Harris, Niall Ferguson, and more. Many of these people are at the forefront of their fields; some are known, and all of them share in the desire to examine humanity, the natural world, and the metaphysical. Instead of remaining in protective camps, they want to engage with different voices and intellects to contemplate the ideas of the age. The subject of this review, author and cultural critic Chuck Klosterman, has also presented at this unique festival, in 2018.

Raised in Captivity: Fictional-Nonfiction is a quirky, sometimes frustrating, yet necessary addition, given the cultural and conversational realities facing twenty-first century American culture. In other books Klosterman is more straightforward. For instance, But What If We’re Wrong: Thinking About the Present as if It Were the Past (2016) is reminiscent of C. S. Lewis’s attitude towards the reading of old books—the present should suspend its confidence on its vision of reality and look to the past in order to recognize mistakes. Clearly, this book checks all the boxes towards classically liberal ideas, the Great Books conversations, and rhetoric surrounding the “good, the true, and the beautiful.” Raised in Captivity, however, is not as topically straightforward or even at times clear as to what the reader is to do with this series of purposely unrelated vignettes. It does not have to be clear as it reflects the current cultural realities Klosterman addresses. The theme that ties these little stories together, the crucial element, is simple: ideas shape individuals and society as a whole and compete with one another for levels of influence.

Reading Klosterman is like reading author Chuck Palahniuk (Fight Club). The reader is always waiting for the other shoe to drop in an oddly discomforting tension that, while present, is not overtly palpable. Unlike Palahniuk, Klosterman does not shift the focus towards the dark underbelly of humanity and realization that human beings are capable of a wide spectrum of activity. The danger of ideas often causes a barely noticeable anticipation, but it is there. His nonfiction wrapped in fiction is an insight into the multiple thought projects he himself engages. Some of the stories take the reader farther into the thought experiment and provide a sense of closure while keeping the lines of dialogue and interpretation open. One story, “The Truth About Food” engages the possible metaphysical elements of nutrition, while a group of scientists struggles with how to communicate “non-empirical” ideas to an age that communicates scientifically. Other stories are simply environments to play out ideas, assumptions, optics, or reality. Still other stories are clearly the beginning of an idea the author is not quite done with or has just begun to untangle and work through. What makes Klosterman and minds of his ilk dangerous is their willingness to discuss and examine every aspect of society. From the obvious to the essentially overlooked, Klosterman creates a fascinating venue in which to explore human insights.

The difficulty in a book like this is the balancing act between shock, kitsch, pop-nihilism, meaningful existentialism, and serious critical discussion on culture. The stories do not always seem rational (“The Secret”), others seem like a puzzle (“Execute Again”), and then there are those clearly in tune with concerns of the present age—the transference of the pain of childbirth to one’s partner (“Pain Is a Concept by Which We Measure Our God”). In any case, these are real issues and concerns on a cultural level. One of the more popular examples—also the example that shows Klosterman’s desire for dialogue—is “Toxic Actuality.” Short story shorter, two college professors (one in his forties and one in his sixties) are having a discussion after one of them is disciplined over micro-aggression and white privilege. As they walk through campus they discuss the various paths forward, what used-to-be, and the like. The beauty of the story is that Klosterman does not reveal the point of view attached to the particular professor. One is left weighing their ages, careers, disciplines, progressivism, conservatism, and in doing so, the reader is forced to address the actual issue, not the camp that would resonate and reaffirm the reader’s perspective. This is how one creates conversation without the baggage.

The title, Raised in Captivity, is not obvious either. Perhaps it means that we are distracted by so much in our modern way of life that we do not have the ability to contemplate the great ideas or even solutions (radical or rational) to many of our problems. Captivity is a curated environment meant to confine and prevent escape. Klosterman pulls at the strings that show our cultural confinement. Perhaps he wishes to reveal the danger of ideas and, more importantly, the danger of culture being one of confinement rather than liberation and expression. Our presumptions, education, religion, ethnicity, and the like all create blind spots; something Klosterman clearly wants us to be aware of without sacrificing for a Lowry-esque (The Giver) form of collectivism. In “How Can This Be the Place” he deconstructs even the most basic assumptions we can make about one another to a comical level. The blue-collar guy at a white-collar bar is surprised lawyers are talking about fantasy baseball, music, their wives’ bodies, and not tennis, books, or thoughtful movies. It seems absurd to make that generalization, but in making it, he shows the reader how often he or she makes it as well.

Klosterman is not starting a cult (he does theorize how to construct one; “What About the Children”) of cultural criticism or anarchy. All the stories do not fit together, there is not an obvious underlying note where the reader stumbles into an “Aha!” moment. He wants us to realize what we rely on and have become accustomed to in order for life to feel secure, certain, and predictable (characteristics of captivity). Rationality and empiricism are under the microscope along with religiosity and telos. Perhaps if we demystify our reality, we may realize how disenchanted we have become—and how afraid we are of mystery, enchantment, and freedom. What would it take to break out of captivity—dangerous ideas?

Chris Butynskyi holds a Ph.D. in humanities from Faulkner University’s Great Books program and is the author of The Inklings, the Victorians, and the Moderns: Reconciling Tradition in the Modern Age (FDUP, 2020). He currently teaches in the history department at Eastern University.