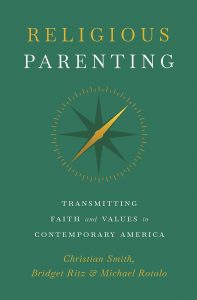 Nearly a decade ago, long before I was the mother of four, I was a pregnant woman preparing for motherhood. Having learned about mission statements in a graduate school class, I thought my husband and I should have one for the massive parenting project we would shortly undertake. I can still picture us standing in our shoebox-sized Cambridge kitchen discussing my proposed Braunstein Family mission statement: we would raise children who were happy, healthy, and proud to be Jewish.

For me, those first two adjectives summarized typical American parenting goals. It was the third that spoke specifically to what has separated our family from most others. Not only do we embrace religious observance, but we are also part of a religious and ethnic minority within the United States.

In that sense, the new book Religious Parenting from Princeton University Press is perfect for parents like me. Noting that research exists about religion from children’s perspective and “factors that influence retention and switching,” this book aims to fill the knowledge gap “about intergenerational religious transmission from the perspective of parents” because “parents are the most important factor shaping the religious outcomes of American youth.”

The book asks how American parents interested in teaching their children about their family’s religious heritage and values convey that knowledge, along with what lessons can be drawn about such religious culture. By interviewing 235 single and coupled parents—215 of whom self-identified as religious, and fifteen of whom were Jewish—the three Notre Dame–affiliated co-authors delved into these questions, finding remarkably similar answers across geography, social class, and religious background. In short, they find that religious parents—as they define us—have much in common.

Parents largely see themselves as responsible for their children’s religious education, with houses of worship being secondary; after parents demonstrate religion’s broad contours, religious leaders and educators fill in specifics, but houses of worship are chosen primarily for their family friendly environments. Parents are wary of the larger culture, believing it “makes their jobs very difficult.” There’s a heavy emphasis on ensuring a strong religious “foundation” in children’s early years, while offering more freedom to teens, lest pressure spur rebellion. Parental responses repeatedly underscored the importance of consistent modeling and avoiding hypocrisy, rather than explaining parents’ prized beliefs or practices. Religion promotes stability, offering adherents community and coping mechanisms in an uncertain world. It also promotes family cohesion and teaches children about service, charity, and good citizenship.

In that sense, the content is relevant to a wide and largely lay audience. However, most of those potential readers will never peruse these pages. What follows are four reasons why busy parents would be wise to wait for the CliffsNotes companion:

First, this book is not written to be read by anyone other than fellow academics. The writing is often muddled. The text overflows with sociological jargon that too frequently goes unexplained. For example, how many parents will know the theories included in “antiquated theories of culture,” the difference between “‘retroductive’ and ‘abductive’ reasoning,” or even what the “Swindlerian persuasion,” “multi-directionalities in cultural models,” or “reality of intersubjectivity” signify? Parents will likely also shake their heads at the authors drilling down on respondents’ citing “values” rather than “other terms like virtues, ethics,” because when 93 percent of parents used the first term, while 7 percent used “virtues,” it’s clear that colloquial speech conveys certain meanings to most listeners, and those meanings are what should matter to sociologists.

At points, the word choice is arrogant, warning readers that “Skimming will not do.” And the authors condescend toward the parents who kindly participated in their study, explaining, “Our sociological task, then, is to reconstruct as accurately as possible from the mass of messy interview materials the cultural models that parents actually embrace but which they can have difficulty making explicit and cogent,” or when they describe interviewees’ statements as “monotonously repetitive.”

It is one thing to require one’s own university students to read opaque, meandering academic writing. It’s quite another to expect parents to bother with phrases like “humans’ embrained bodies.” The writing itself was so infuriating, especially early on as the authors explained their study, that I nearly flung my book out the window.

Second, there is the authors’ definition of “religious.” The “religious” interviewees were affiliated with religious congregations around the country, which is certainly one metric for religiosity. However, with a stated goal of “investigat[ing] the religiously ‘higher end’ of American [Jewish] parents,” I would have pointed the authors toward Orthodoxy, or at least suggested that they specifically select for parents who keep kosher, even broadly defined. Further, I would not have included the opinions of a mother who found “it weird to have [her baby] do Jewish things, like Shabbat or putting a little yamaka [sic] on his little head”; the father who blamed religion for “the overwhelming number of wars”; the mother who insisted that “rules don’t have intrinsic truth or value to them” in Judaism; or the father who acknowledged, “‘I’m not really a spiritual or religious person.’” Nor would I have limited the sample to Conservative Jews, as the authors inexplicably did.

To wit, one Jewish mother acknowledged, “‘In an ideal world, it would be wonderful if they married someone Jewish, to be able to make sure that the culture got kept up. But I would never say that to them.’” Of course, readers might wonder, why? If anyone should be conveying the importance of Judaism and Jewish continuity to children, it’s their own parents. That the authors completely ignore Orthodox Jews, who observe Judaism as a 24/7 religion and have a better retention rate, makes zero sense.

On a related note, where the authors saw unexpected overlap between respondents of different backgrounds and ascribed that to minimal religious differences, I had a different take-away. That many parents expressed a willingness to skip religious services in favor of weekend sports leagues, for example, sounded less like commentary on any particular religious group than an expression of Americanism, our non-sectarian religion. Ditto where the authors note, “The story is thus identical across all of these demographic differences: in life, each individual must be self-determining and true to their unique selves.” That perfectly encapsulates American individualist thinking, but not community-oriented Judaism. And when the authors observe, “Children’s ‘best selves’ do not automatically happen. They must be nurtured and achieved,” they are summarizing American upper-middle-class achievement culture, not a religious idea.

American middle-class parents of all backgrounds have bought into widespread, specifically American, ideas about happiness, like life being a journey and a matter of individual choices. Success is often conflated with admission to colleges like Harvard, and parenting is designed to accommodate such goals. Consider the “Jewish mother from New York City” who was asked about life’s purpose and responded, “It’s all about attainment, and when there’s something you want really badly and you don’t obtain it, there’s nothing worse.” Needless to say, there is nothing Jewish, religiously speaking, about her comment; she’s reflecting on striving amidst a competitive culture.

For such families, religion is not the only influence; there is also a matter of how assimilated families are into the larger American culture, which always tugs at us all. This is why large sections of the book that might be summarized in New York lingo as “we’re all cafeteria Catholics” felt oversimplified. Knowing observant Jews and Christians as I do, I simply don’t believe that we are.

The third problem that will most rankle Jewish readers was the authors’ superficial understanding of Judaism itself. For example, the authors say “American Judaism is functionally roughly similar to Protestantism … On the one hand, most American Jews generally expect fairly strong identification with adherence to Judaism, but that is to be expressed through a quite limited set of expectations: identity continuity, ethics and values, and hopefully some ritual observances.” They seemingly include Jewish parents among the interviewees not preoccupied with “heaven, salvation, the hereafter, or eternity,” as if this were news, while quoting a Jewish mother explaining that Judaism is here-and-now focused just five pages later. They later return to this theme, observing that Jewish (and Buddhist) parents did not talk about salvation, calling it “unsurprising, since they are not important in the central ‘doctrines’ of those traditions,” which again, oddly implies that salvation even exists as a Jewish concept.

The authors note “the apparent paradox that many Jewish parents, in our observation, are seriously committed to passing on Judaism to their children but not very interested in talking with them about the Jewish religion,” unaware that cultural Jews are definitionally separate from religious Jews and should not have been included in their sample. They also referenced a “Shabbat seder” and paint other religions like Islam and Mormonism as being all-encompassing lifestyles, while seemingly failing to acknowledge that Judaism is too. To properly analyze American Jewish families, a deeper understanding of Judaism is, in fact, essential.

Finally, readers may note that the authors’ mission of “listen[ing] long and analyz[ing] patiently” doesn’t always work so smoothly in execution. For example, the authors observe, “Most American Jewish parents are also not Scripture thumpers,” oddly using a Christian term for the Bible and disregarding that the Jews they’d consider Bible Thumpers were screened out of their original sample. In an extended quote, a Muslim mother from Indiana is also allowed to uncritically opine “The original Jewish people were Muslims … So the Jews that stayed true Jews, they’re Muslims,” while no narrative voice corrects her.

If the authors want to be celebrated among their academic peers, they should have kept this book focused squarely on that audience, in writing and marketing. If their goal is to be widely read and impact the culture, though, they should have tailored their writing to intellectually curious but busy parents beyond the Ivory Tower. That would have required hiring a consultant for Jewish content and a non-academic writer to polish the final text. Rather than writing nearly 300 footnote-filled pages, they could have published a thirty-page summary of their study and findings. That might have offered religious parents a valuable users’ manual, which parents might actually read.