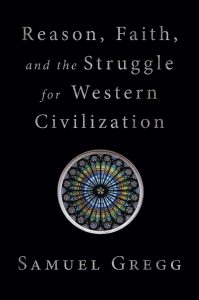 In “The Blue Cross,” G. K. Chesterton’s first and most famous story about the priest-detective Father Brown, the hero suspects that his traveling companion, who is also dressed as a priest, is in fact an impostor attempting to steal the valuable relic he is carrying. At the end of the story, the police arrest the would-be thief, and Father Brown reveals the moment when he knew beyond any doubt that his companion was a fraud. During their theological conversation, the supposed priest had called reason into question. In “The Secret Garden,” the second Father Brown story, the criminal turns out to be the police inspector from “The Blue Cross.” The inspector is an atheist who hates the Catholic Church and is desperate to prevent a potential convert’s changing his will and leaving his extensive fortune to the institution. He murders the catechumen, but is ultimately discovered by Father Brown.

The rejection of reason and the rejection of faith—the twin problems identified by Chesterton—are also the problems analyzed by Samuel Gregg in Reason, Faith, and the Struggle for Western Civilization. According to Gregg, a secret to the historic success of the West has been its capacity to negotiate a healthy relationship between reason and faith, with each complementing and even strengthening the other. This relationship has been compromised over the past few centuries, however, and we run the risk of falling into what Pope Benedict XVI calls “pathologies of religion and reason.” The situation is critical. Paraphrasing Benedict, Gregg asks, “Do you understand that unless the West gets the relation between reason and faith right it will be unable to overcome its inner traumas or defend itself from those who wage war against it in the name of particular ideologies?” (4).

Discussions of Western civilization sometimes founder on definition. An understanding of “the West” based on geography, for example, creates many difficulties. Gregg rests his definition on two cultural ideas: the commitment to reasoned inquiry in search of truth, and the religious traditions of Judaism and Christianity. According to Gregg, both these elements are necessary to account for the West’s distinctive character. This way of understanding the West is sound in that it distinguishes it not only from, say, Chinese or Islamic civilization, but also from capital-O Orthodox civilization, which has never prized reason to the extent the West has.

At least since the publication of Edward Gibbon’s influential Decline and Fall of the Roman Empire in the eighteenth century, the usual account of the history of thought describes the ancient Hebrews as having a mythological view of the world that was hostile to reason. According to Gibbon, this anti-rationality was passed on to Christianity, which enervated the Romans and contributed to their downfall. Gregg argues, by contrast, that the Hebrews were the first people to put forward a rational view of the cosmos. They viewed the world as inherently good and orderly and rejected the prevalent belief that human rulers were gods. Centuries before the vaunted Greek achievements in philosophy, the Hebrews brought about one of the human race’s most important “enlightenments” through their rejection of idolatry and pagan mythology. Accompanying these developments was an emphasis on human freedom and a rejection of the fatalism so common in the pagan world.

According to Gregg, then, the ancient Greeks were not, as we are so often told in textbooks, the pioneers of Western rationality. Nevertheless, the Greek contributions were considerable. Gregg focuses on the concept of logos in the Socratic and Stoic traditions. The Stoics used the term to describe an animating spirit in all things and the participation of human reason in a divine order. This impersonal concept differs from the Hebrew understanding of a personal God, but it is similar in holding that a rationality is at the source of all things. The Greek and Hebrew traditions influenced one another in Hellenistic Alexandria and other places.

Christianity fused the two traditions into a unity, according to Gregg. The Gospel of John presents Christ as the divine logos, reason incarnate. The early church affirmed the value of natural reason as a process by which all people are capable of knowing the truth. It also stressed human freedom, the ability to choose the good, to pursue excellence. Gregg argues that these three teachings were an essential part of “the West’s DNA” for more than a millennium. Faith and reason cooperated in the pursuit of capital-T Truth.

Unfortunately, the world of faith became separated from the world of reason in the modern West. This development was not the inevitable result, as some say, of contradictions between the two made apparent by progress in the natural sciences. Rather, writes Gregg, they stem from Lockean empiricism, the claim that all knowledge ultimately results from reflection on sensory experiences. Gregg discusses two “pathologies of reason” that result from this stance: Prometheanism (we must remake the world in order to remake our sensory experience) and scientism (we must rely exclusively on the scientific method to acquire knowledge).

These pathologies of reason came to inform various “pathologies of religion” that resulted as many nineteenth-century intellectuals turned away from organized religion but were unable to deny the religious impulse that is part of human nature. Thinkers such as Karl Marx and John Stuart Mill created substitute religions—implicitly in Marx’s case, explicitly in Mill’s—that were intended to be wholly rational replacements for Christianity. Friedrich Nietzsche went further, in effect rejecting reason in favor of embracing what amounted to a religion based on pure will. The pathologies of religion and reason paved the way for more recent threats to the West: an “authoritarian relativism” that insists no one may publicly proclaim the truth of his philosophical or theological positions, a “liberal religion” centered on inward feelings rather than objective truth, and a fideism manifested in some Christian fellowships and most dangerously in jihadist Islam. Surveying all these problems, Gregg writes, “If the West’s unique integration of reason and faith is a defining characteristic of its civilization, we must conclude that this civilization is seriously imperiled” (122).

Nevertheless, Gregg optimistically insists that all is not lost. The book’s final two chapters lay out his vision for the recovery of the cooperation of reason and faith. We must recover the idea of logos; “without Logos, the West is lost” (166). To do so, Gregg argues, we must strongly reaffirm the “Central Tradition” of the West: Creation, Freedom, Justice, and Faith, according to John Finnis. We must also consider “what a new encounter between particular threads of Enlightenment thought and the teachings of the Jewish and Christian faiths might look like” (128). Here Gregg points to colonial America as an example of how the spirit of Enlightenment can coexist and fruitfully interact with organized religion.

One of this book’s chief strengths is its clarity; another is its conciseness. In just 166 pages, Gregg manages to lay out a vision of the West’s intellectual strengths and weaknesses that neither descends into jargon nor panders to the reader. Moreover, Gregg convincingly demonstrates that these ideas matter. The pathologies of religion and reason cannot be addressed effectively merely with, say, an economic program. A reformation of thought is required.

Gregg’s diagnosis of and proposed remedy for this dilemma in the West—and Gregg acknowledges that it is not the West’s only dilemma—will no doubt find both strong supporters and critics among Jews and Christians. His presentation could provide a rallying point for orthodox believers, particularly for Roman Catholics, who can find much support for his thesis in their tradition. At the same time, many believers in various religious traditions feel quite at home with the liberal religion Gregg critiques, and some orthodox Protestants who hold to a form of fideism will view his praise of reason in a negative light. Thus his argument may encounter resistance from many who at first glance would seem to be his natural allies, although I think his argument has the potential to win over at least some of them.

As for the atheists and agnostics among us, Gregg provides some sound reasons for them to reconsider their rejection of faith, such as the evident moral poverty resulting from scientism and the impossibility of reason’s arising from nothing. Can these arguments penetrate the fog created by decades of our intellectuals’ attempting to reduce all social and religious questions to those of race, class, gender, and sexuality? Hope springs eternal.

Reason, Faith, and the Struggle for Western Civilization is a challenging book that adds a much-needed dimension to the conversation about the state of Western civilization, a conversation where the loudest voices usually come from self-proclaimed haters who gloat at the West’s presumed decline or traditionalists who bemoan a world they believe to be lost forever. Samuel Gregg offers a third possibility: a renewal that recovers what is best in our tradition. No doubt G. K. Chesterton would approve.

Jason Jewell chairs the Department of Humanities at Faulkner University, where he directs graduate programs based on the Great Books of Western civilization. He was a Wilbur Scholar at the Russell Kirk Center for Cultural Renewal in the summer of 2019.