Reclaiming a Place for Conversation 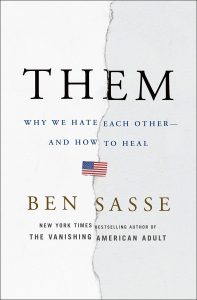 Conservatives in twenty-first century America often fear an assortment of boogeymen that may or may not actually exist. Whether it is the specter of “cultural marxism,” the ever-dangerous “postmodernism,” or the perceived rise of “incivility” in public life, conservatives can generally feel that something wicked this way comes. Labels like “cultural marxism” often indicate a problem that cultural critic Alan Jacobs describes as exhausted language becoming axiomatic: “conversations cease to be conversations but rather turn into endlessly iterated restatements of quasi-religious conviction.” Jacobs argues that “when people are just trotting out the same limited set of terms in every context, that says something about the inadequacy of the vocabulary itself.” Nevertheless, there is something to be said for the intuition that something has gone dangerously awry in American life and further, that certain expressions of both Far-Left and Far-Right politics are deeply corrosive. Senator Ben Sasse’s latest book, Them: Why We Hate Each Other—And How To Heal, taps into those intuitions, examines them critically, and then offers a refreshingly clear view of what ails our civic society, even as it fails to provide a robust vision for to how to restore that society.

Sasse identifies three interconnected challenges that we need to face with courage and prudence. The first challenge is rootlessness, which manifests itself in loneliness and a corresponding disregard for our Heideggerian “beingness” in particular place and time. The second challenge is the inflation of the virtual self, which manifests as an unhealthy connection to the online world at the expense of real-world community. The third challenge is a conflation of politics and civic life, which manifests as an infatuation with governmental power to the neglect of all other forms of community involvement. It is worth unpacking each of these challenges in turn.

1. The Rise of Rootlessness

Sasse observes that “as jobs last a shorter time, and become less connected to tangible communities, we can hardly be surprised that people are feeling more detached and rootless.” Sasse cites the usual suspects—Putnam, Murray, and the like—to explain why community is so fragmented. The talking points are by now familiar to us, though no less true for that familiarity: the invention of the car, the proliferation of cable news sources, the rise of a globally connected financial market. The more novel aspect of Sasse’s analysis is how he connects this problem of rootlessness to the experience of alienation in the “emerging adult” demographic. He writes, perfectly capturing my experience and that of my peers, that “many of our young adults feel a hard-to-define, existential ache in their chests: What is my calling? Where is my place? Who are my people?” And he explains the origins of that ache: “we’ve generally set our young people ‘free’ to find meaning on their own—apart from any communities into which they might have been initiated and which could have offered guidance.” This is a stirring critique, not of “young people these days” but of elders: it isn’t so much that the young pulled away from institutions and communities, but that they were pushed away in order to “find themselves” (at college, abroad, in the military) or, even worse, never properly integrated within those communities and institutions in the first place (Young Life and Life Teen aren’t exactly the most effective ways to catechize the youth).

Sasse doesn’t let “young people” off the hook though. Too often we let the perfect be the enemy of the good and avoid investing in the communities available to us. “Bloom where you’re planted” may be cliché, but it’s still true. Another area in which we are culpable for our own maladies is in our addiction to social media. Sasse writes forcefully, noting that “we undermine these roots [in real, communal, messy life] every day by scrolling through feeds, trying to throw ourselves into a different time and place, because maybe things are better there.” We should know better: it’s no longer shocking to hear that after losing ourselves in endless feeds, “the end result is aching loneliness.” Given our addictions, it is worth exploring the dangers that the virtual self poses in more detail.

2. The Inflation of the Virtual Self

Sasse argues that “the same technology that has liberated us from so much inconvenience and drudgery has also unmoored us from the things that anchor our identities.” In a particularly haunting section he writes: “I suspect historians will look back at the early twenty-first century and wonder why humans were so willing, often to the point of desperation, to confide our deepest secrets, desires, and fears to machines and inanimate objects, while retreating from actual flesh-and-blood people.” The problem, as anyone who has ever spent time in vitriolic debates on social media surely knows, is that our virtual self is rarely circumspect, self-possessed, and charitable. And thus, instead of striving for robust but respectful public discourse, notes Sasse, “we’ve let our loneliness, our fears, and our anxieties swallow up the better angels of our nature.”

But it is worse even than that. Sasse also notes that “when we prioritize ‘news’ from afar, we’re saying that our distant-but-shallow communities are more important than our small-but-deep flesh-and-blood ones.” And we’re not just stating that, we’re coming to believe it through our own practices. We are teaching ourselves to feel (affectively) that what is happening a thousand miles away from us is somehow more important than what is happening in our own neighborhood. Sasse writes to remind us that “we find lives of meaning and purposes at and near home,” and that “the District of Columbia is not the center of American life: it exists to maintain a framework of ordered liberty—so that your city or town, the place where you live, can be the center of the world.” A simple truth, but one we are prone to forget precisely because of our bad habits, is that “we live richer, more fulfilled lives when we’re directing ourselves to the right people.”

As a transition into the final challenge, note that the virtual self formed through national media is a self that conforms to mass culture, and this leads to a stunning loss of diversity. Sasse writes that “D.C. is not supposed to merely tolerate but to actively encourage a wide diversity of local communities.” And this means that “we don’t need to agree on everything: we simply need to allow the space for communities of different beliefs and custom to flourish.” But if we don’t cultivate a sense of distinctive identity tied to locality, we will conflate political and civic identity in ways that lead us to despise our own localities precisely because they do not conform with the one-size-fits-all politic we imagine will be best suited to human flourishing.

3. The Conflation of Political and Civic

Sasse reminds us that “government is not the center of life but the framework that enables rich lives to be lived in the true centers of freedom and love: homes and communities.” But when mantras like “the personal is political” infect civic reasoning, government fills the frame of reference and community disappears from view. Sasse explains that “one of the core problems with our public life together is that we’re constantly failing to distinguish between politics and civics. Politics is about the use of power—how it is acquired and who wields it. Civics is about who we are as a people.” Sasse argues that “obviously, politics matters. But civics matters more.” Put differently, “politics is simply the bare-bones instrument we use to protect the freedom to live lives of purpose, service and love.” Sasse warns that “if we collapse civics and politics together … then we ensure that politics squeezes out community. We give priority to compulsion over friendship, and coerced uniformity over genuine diversity.” And predictably, if we lose civic life, political life becomes stymied too: “putting politics (the means) before civics (the ends)—makes certain that we don’t get either: we sacrifice the fundamental bonds that should unite us across our differences, and we don’t get sustainable political and legislative output either.”

On the other hand, when we prioritize civic life born out of local community, we find opportunity for meaningful growth and change. Sasse writes: ”Neighbors see today’s conversation not as the last discussion we’ll ever have, but as a precursor to tomorrow’s. We can and will visit again. We can continue talking, and listening. We can be open to future persuasion—and to being persuaded. We need not win everything by force, and we need not win everything right now.”

How do we cultivate the civic life and ensure that it is never subsumed into the political? Naturally, Sasse’s answer is to dig deeper into our own localities. He writes: “when we look around our neighborhoods, we should have eyes to see that we share common interests and goals that are more important than just about any question of federal policy—chief among those goals, raising our children to become kind, thoughtful, gritty, respectful adults who use their skills and talents to serve others.” And with that insight, it all comes full circle: parents building communities in which their youth can flourish leads to emerging adults who have learned how to value and invest in communities of their own.

Sasse’s book is a helpful snapshot of the present moment, but it lacks a robust vision for systemic change. This, too, is fitting for the conservative: at least since Nisbet’s groundbreaking book The Quest for Community (the more profound precursor to Bowling Alone), conservatives have been much more adept at pointing out cultural problems than in figuring out how to fix them. Aside from the rather practical and vital advice on blooming in one’s garden, Sasse gestures briefly in the direction of ideas like “the sharing economy,” “Tiny Houses,” and “New Urbanism” as possible solutions to the systemic and systematic loss of community in our nation. These ideas are good so far as they go, but how far is that?

There have always been outliers in the conservative intelligentsia who have dared to question fundamental axioms of American life. The Agrarian tradition (whether Kirk or our contemporary Berry) asked us if urbanization is always good. Bozell and various other illiberals asked if procedural liberalism is as value-neutral and merely instrumental as has been suggested. And of course the merits of “free market” “capitalism” (in quotes because, again, is this exhausted language?) has always been fiercely debated both within conservatism and outside of it. Sasse’s book can hardly be faulted for not producing answers to all of these questions, but these are the questions his book brings to mind. Nevertheless, if this book teaches us anything, it’s this: we desperately need for those questions to be fiercely and lovingly debated in public places in our local communities.

Anthony M. Barr is a student in the Templeton Honors College where he studies history, literature, and Orthodox thought and culture. He frequently writes for Ethika Politika and Circe Institute and has done research on political theory, education policy, and civic and moral virtue for various nonprofits, businesses, and independent publishing companies.