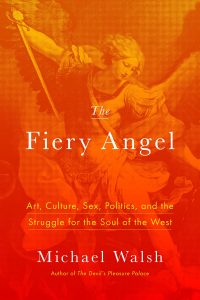 The Fiery Angel: Art, Culture, Sex, Politics, and the Struggle for the Soul of the West
by Michael Walsh.
Encounter Books, 2018.
Paperback, 231 pages, $26.

The image of the fiery angel, as employed by Michael Walsh in his latest work, is at once terrifying and enthralling. Inspired by Sergei Prokofiev’s 1920s opera The Fiery Angel and drawing upon Goethe’s Faust and Milton’s Paradise Lost, Walsh expertly shows how this fiery angel is a symbol of seduction and destruction as well as a symbol of optimism and redemption. He calls this a book “about finding our way back home.” Western culture is being eroded and lost through blatant hatred and attack, willful ignorance, and deadly indifference. The fiery angel symbolizes pathologies that Walsh is certain can only be defeated by being acknowledged and encountered.

Of particular interest to Walsh’s scholarship is the “Heroic Narrative.” This can best be described as an ancient story that “explains ourselves to ourselves.” Walsh defines it as heroic because it relates the strivings and capabilities of the human endeavor, and it is elemental to his understanding of the crisis of Western civilization. “Not to understand culture is not to understand history, and thus to be disarmed in the greatest fight in which Western culture has ever been collectively engaged in: the struggle for its soul.” Walsh sees attacks on Western culture from both without and within, which are consequentially attacks on human history and on the arts that inform and enrich Western culture.

He sees the erosion of the West coming largely at the hands of “cultural Marxism,” which Walsh sees as the aggressive and fixated attempt of the Left to reduce all aspects of life to the communist model. The politics, philosophy, and art of the Western world must become subservient to Marxist thought. Though Walsh concedes that art is informed by politics, he vehemently denies that politics alone define a people. That is the function of culture. Art is the emotional and cautionary reaction regarding the human condition. A prime example of this is Harriet Beecher Stowe’s Uncle Tom’s Cabin; art informed by the politics of the day, but with the emotional appeal for change to the existing social condition. This moral component, Walsh states, is what makes Western storytelling so compelling, necessary, and unique. Great art speaks for itself because it trusts and allows the human heart to discern the truth.

Within the Christian tradition an angel with a flaming sword expels Adam and Eve from paradise. Succumbing to the temptation to knowledge, they have come to know good by doing evil. The angel is harsh, but cleansing as well. Walsh sees this motif as fundamental to Western thought because it opens the door to the redemption offered through Christianity. “Whether one accepts Jesus as the Christ matters not: the fact remains that history was changed. And not only history, but the course of Western thought, Western art, and Western culture.” The Heroic Narrative gains momentum because it promotes the recognition of intrinsic worth, particularly that of women. This Christian contribution cannot be underestimated.

The blatant attack upon the feminine is one area of particular concern. The leftwing trend is one of eradication of differences, whether of national borders and identities, individual excellences, and now, drastically, gender itself. As women strive to be more like men, erasing all difference, the sexual crisis deepens. Not long ago barrenness was considered a burden and a sorrow. Now it is lauded as freedom and liberty. One is simply expected to avert their eyes from the death of Europe through abortion and contraception. Sex has become mere action, devoid of meaning or responsibility. Woman has painfully divorced herself from her own dignity. Walsh illustrates his argument with the classic story of “Beauty and the Beast,” showing how Belle is the embodiment of the feminine precisely because she is the opposite of the beast. Her womanhood lies in her difference, not sameness, to the object of her attraction. The beast has no way in which to combat her true and powerful womanhood. He must submit and be changed by her faith and love.

Embrace of cultural Marxism has caused the West to become embarrassed and angered by its own uniqueness, its successes, its superiority, its special mission. The very people who should be upholding Western civilization aren now those most loudly championing mediocrity. Walsh is not shy in his assessment: “History is replete with civilizations and cultures that stopped believing in their own basic tenets, turned certainties into questions, morals to ‘values,’ and vanished.” The West, he says, must reestablish a proper sense of compassion, look to the past for guidance, and embrace the arts and the wisdom and warning they impart. Walsh remains convinced that people are not just fodder; that violence does not avenge violence; that art is never just a transposed political program. Music and words, paintings and sculptures—they really do matter.

This recognition of one’s own subtext and dependency is now abhorrent to many because it requires the intelligence to discern, the ability to accept, and the willingness to learn—qualities that simply are not widespread in today’s world. The story is not just about what happens next, but what is happening now. The process is as crucial as the message. It is not action alone, but the meaning behind it that carries great weight. Walsh maintains that the ability to think complexly, to delve into meaning, to change one’s mind are all essential facets of Western thought. The Leftist model rejects these abilities and seeks to trap humanity in a somber oneness.

Goethe’s Faust is seduced with the choice between his desires and his own soul, a choice which once made cannot be undone. This is fate at its finest. Faust’s choice is his downfall, but it is this very choice that is essential to art, regardless of the outcome. “How we hate choices,” Walsh declares. Perhaps the wrong choice will be made but this, Walsh insists, is part of what it means to be human:

“In the West, we bite the apple, and then take the consequences, come what may. Not only are there worlds—universes—to win, but there is always the thrill of the game. The irrational desire, or confidence, to wager everything in pursuit of the better is one of the hallmarks of the Western Heroic Narrative: the hero may go down, tragically, but it will never be for nothing. Our republics are for free men; serfs or slaves need not apply.”

Walsh brings this swift and skillful work to a close with the famous quote from Pogo, an American comic strip: “We have met the enemy and he is us.” It seems true, yet must it be so? What of those fiery angels—the one of damnation and the other of redemption? Are they not always present in every time and place and situation? For Walsh the way back home is not some new, untried path, but one from a collective cultural past. “We have our guides,” he insists “if only we will heed them.”

Elizabeth Bittner holds a B.A. in political science from the Thomas More College of Liberal Arts and a masters degree in the humanities from the University of Dallas. She currently resides with her husband in rural Missouri.