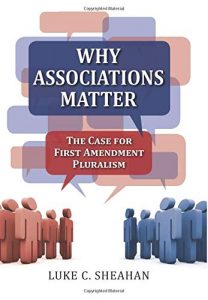 On one level Luke Sheahan’s excellent book is a practical, lawyerly brief aiming to correct a mistake in legal doctrine and public policy. At a deeper level, however, it is part of a crucial attempt to recover the way of thinking essential to ordered liberty. That way of thinking is rooted in recognition of the social nature of the human person. Recognizing this nature has been undermined over the last several decades as judges and policymakers have worked to “free” individuals from the social relations that make them fully human persons capable of self-government.

The locus of Sheahan’s concern is the Supreme Court’s decision in Christian Legal Society v. Martinez (2010). Here, the Court upheld a public university’s decision to ban a Christian student group from campus because it did not allow people who refused to agree to its statement of faith to vote and run for office. The group’s statement affirmed traditional Christian values, including the duty to engage in sexual activity only within the context of traditional, opposite-sex marriage. The University of California-Hastings law school essentially banned the Christian Legal Society (CLS) from campus on the grounds that it was discriminating against homosexuals, hence undermining the school’s goal of maintaining an “inclusive” learning environment.

The Supreme Court failed even to recognize the harm the university had done to CLS by denying its right to recruit and meet on campus. Instead, the majority handed down the rather bizarre finding that associations are constitutionally allowed to express discriminatory views but may not limit membership rights “on the basis of belief or conduct arising from belief.” Thus, groups can be required to allow those who openly oppose their very reason for existing to become members, vote, and hold office in their associations.

With this decision the Court destroyed association as a constitutional right. The right of Americans to form associations for their own self-chosen (legal) purposes and govern them as they see fit is deeply ingrained in American tradition and recognized in the constitutional right to assembly. Unfortunately, courts increasingly have recognized it only as a derivative right growing from the individual right to free speech. Courts have been stretching and reconfiguring this free speech right for over a century. They have turned it into a right of “expression,” treating each individual as an autonomous being that creates its own meaning through emotive actions from flag burning to sexual activity. In this schema there is no association proper. There is only “expressive association,” which exists purely as a means by which individuals may choose to express their own, individual emotions and opinions.

Lost in this hyper-individualist understanding of association are the essential elements of any decent life: community and purpose. In an important act of analytic recovery, Sheahan provides an exhaustive review of the work of sociologist Robert Nisbet. Well known to conservative readers for his Quest for Community, Nisbet wrote extensively on the nature and functions of associations. Sheahan systematically lays out Nisbet’s understanding of associations’ roles in shielding persons and their communities from overreaching governments and, especially, in forming human personalities.

On the political level, Nisbet notes that “major groups which fall in between the individual and the sovereign state become intermediating influences between citizen and sovereign. They are at once buffers against too arbitrary a political power and reinforcements to the individual’s conception of himself and his own power.” This crucial function, noted already by Alexis de Tocqueville in his classic study of “administrative decentralization” and its role in protecting democratic liberty, is in fact a byproduct of associations’ natural pursuit of their own goals. Families, religious organizations, and book clubs all have reasons for existing that are made concrete in their activities, and also in internal norms. Like associations’ actions, their customs and standards of behavior form around common recognition of stated values and internal authority. The resulting obedience is limited, provisional, and subject to a right to exit if the member no longer shares the association’s values. Still, internal rules and discipline are essential to the very existence of any meaningful association.

Taken together, these elements of purposive association make up important parts of each person’s life; they may be said to make up that life itself. As Sheahan puts it, “Associations in a democracy are not a means to self-government; they are self-government. They are not one option for the ordering of human life; they are the order of human life.”

To survive, associations must have real purpose and must be accorded their own integrity and internal governance. Unfortunately, the rise of the commanding, sovereign state, with its claim to be the master community of “its” society, has undermined both these requirements for any genuine community. Simplistic notions of national sovereignty helped rulers centralize power at the expense of more natural, local associations in the name of social cohesion. State actors came to see themselves as entitled to order and re-order these associations to fit with their own designs and notions of justice. The doctrine of sovereignty, put forward by the English Parliament, was rejected outright at the American Revolution. But the vision of the state as a kind of national community responsible for the health, well-being, and egalitarian virtue of its constituent members has infected public discourse over time. It has, among other things, led to the conviction that groups cannot themselves have rights. (This despite the fact that the development of legally recognized rights in the Anglo-American tradition literally began with battles over the rights of groups including the Church as well as various municipalities and classes.) It lay behind programs of transformation such as Lyndon Johnson’s Great Society, with its goal of liberating the individual “from the enslaving forces of his environment.”

As Sheahan notes, the program of “freeing” persons from their communities dates back to the days of “laissez-faire” liberalism in which courts and political actors both worked to undermine the rights of groups in the name of individual freedom. But the rise of the Progressive state made matters far worse by both taking away essential functions (e.g. charity) once carried out by voluntary associations and subjecting those associations to a regimen of oversight intended to ensure that they abided by and taught the doctrines of a “national community” dedicated to individual autonomy and substantive equality. Pluralism in the old sense of a variety of viewpoints, goals, and functions, all protected by an overarching respect for the integrity of self-governing groups has given way to a stifling demand for conformity within a social democratic state.

Recognizing the deeper character of the problem, Sheahan nevertheless concentrates on presenting a practical solution to the specific danger presented by CLS v. Martinez, namely, court-enforced protection of the right of association. He proposes a “functional autonomy test” courts would apply in examining state actions potentially violating this right. Judges would seek to determine whether the state action (e.g. banning a religious student group from a public university campus) interfered with the functional autonomy of the group, inappropriately centralized power, inhibited the association’s exercise of its proper authority over its members, or interfered with the association’s traditions. He also presents draft legislation aimed at promoting greater respect for associations, especially in terms of their autonomy and internal integrity.

Sheahan’s stated goal is actually rather modest—perhaps too modest. He seeks to work within today’s “rights talk” in court and Congress, using its language to restate the basic principles of social understanding. He would leave intact the basic structures of anti-discrimination law, by which the federal government has taken over control of decisions regarding hiring, promotion, buying, selling, renting, lending, and admission to universities and various other organizations. What would change? Beside the right of various individuals to be free from various private as well as public decisions that might impact them unequally according to their “status” (race, sex, ethnicity, sexual orientation, etc.) would be a new (or resuscitated) right of associations to autonomy and internal integrity.

Sheahan evinces concern that any more vigorous critique of the anti-discrimination state would endanger social progress, though he also raises the specter of social regress under current standards should regressive judges come to dominate the courts. He is right, no doubt, to fear being charged with racism, sexism, and/or homophobia. But one need not question the clear good of recognizing the fundamental equality of all people as children of God deserving of equality before the law, equal citizenship rights, and equal respect within our social order in order to question the administrative state’s role in reconfiguring all of society to make it more substantively equal.

Indeed, our current, toxic, identity politics itself is in significant measure a revolt against the iron cage of a diversity regime that imposes a combination of quotas, proof of status neutrality, and equal outcomes unattainable in a free society composed of truly diverse people, communities, and interests. The anti-discrimination state is as hostile to civil discourse as it is to the natural formation of natural communities because it denies our full humanity, turning us into isolated pursuers of whatever advantages we can gain from its bureaucratic structures. It rejects our truly social nature and so reduces any surviving associations to mere factions seeking mutual advantage. As such, it is at war with the practice of self-government by a free, decent people.

Still, Sheahan has presented a valuable justification for reconsidering the current hostility toward associations. He seeks to build on Nisbet’s proposal for a new “laissez-faire of groups” that would restore respect for the communities within which alone we can lead meaningful lives. Moreover, there is a subversive character to the social understanding he would restore. Once courts and policy makers begin thinking again in terms of human relations rather than the distribution of material goods, life chances, and status to individuals, we are on the road back to nature, to an understanding of who we are and of the centrality, not of the sovereign state, but of the family, the church, and the local association in any decent life.