The Rise of Black Intellectual History 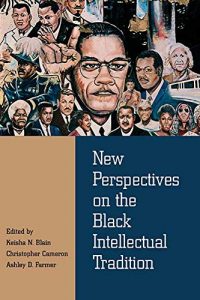 While the physical prowess of African people is much lauded in the Western world, many still deem the idea of black thought as patently oxymoronic. The concept of black people thinking in private and public—and doing so in ways that are meaningful enough to be documented—is often considered a fantastical thought of puerile racial optimism. New Perspectives on the Black Intellectual Tradition, edited by Keisha N. Blain, Christopher Cameron, and Ashley D. Farmer, scotches this mendacious narrative with an applause-worthy collection of essays that meticulously examine varied aspects of the vast black intellectual tradition across the globe. The authors of the essays show that black thought is not a utopian figment of the feverish Afrocentric imagination; it is a verifiable reality with which sober-minded people must reckon.

Perhaps the most notable essay in the first section on black internationalism is by Celeste Day Moore on the teaching of French language classes at historically black colleges and universities, and the importance of the French language for black global imagination. One of the principal arguments of the essay is that black internationalism and black pride are complementary. Commencing her chapter, Moore highlights Booker T. Washington’s obtuse disparagement of a poor African American man who was so enthralled with the study of French language that he was seemingly blissfully unaware of the situation around him. She juxtaposes this with W. E. B. Du Bois’s more sophisticated understanding of the power of language to improve one’s lot in life and broaden one’s conception of possibilities.

Washington’s condemnation of black intellectual aspiration in the face of poverty demonstrates that contemporary antagonism towards scholarly pursuits is not without historical analogues. One does not have to defenestrate intellectual ambition in order to address pressing economic concerns. The idea that the purpose of education should primarily be to address economic concerns, as opposed to the inherent value of enriching one’s mind is a popular belief in some quarters. However, education is beneficial in and of itself; it does not have to be linked to economic advancement to be valuable.

Given Washington’s confused position with respect to intellectualism’s inherent value, it is no surprise that some of his quotes are still associated with embarrassingly anti-intellectual positions. Washington’s quote: “No race can prosper till it learns that there is as much dignity in tilling a field as writing a poem,” was used at the start of a wholly imbecilic and vulgar episode of the Atlanta-born rapper Killer Mike’s Netflix series Trigger Warning, which took this idea to an extreme and encouraged children not to aspire to be scientists or President of the United States, but instead to learn a practical trade such as plumbing or carpentry in order to fend for oneself and one’s family as quickly as possible. This approach is the result of possessing a worshipful attitude towards capital and subscribing to the idea that intellectual concerns are subordinate to the attainment of the dollar. This devaluing of intellectual activities is counterproductive to black society as it reifies the racist conceit that people of African descent can and should only aspire to professions that involve physicality, as opposed to intellectual professions that involve high cerebral functioning. Although Booker T. Washington has many important ideas that are foundational to black conservatism and ought to be taken seriously in a modern society, it leaves a palpable stain on his legacy that some of his proclamations are being used to advance patently anti-intellectual positions.

The section of the book that best demonstrates the aforementioned commendable breadth and balance focuses on religion and spirituality. Addressing the conspicuous lack of formal integration of religion into the picture of black intellectualism are brilliant essays by David Weinfeld, Christopher Cameron, and LeRhonda S. Manigault-Bryant. Weinfeld’s essay covers the distinguished Harlem Renaissance writer and thinker Alain LeRoy Locke’s affiliation with the Baha’i Faith. Christopher Cameron explores the life of the acclaimed poet and activist Langston Hughes and his disbelief in God. Most intriguing is LeRhonda S. Manigault-Bryant’s chapter on the lively intersection between black women’s religiosity and epistemology, and how important it is to recognize the role that black spiritual grandmothers play in both the consistent production and intergenerational flow of religious knowledge. This section of the collection demonstrates the diversity of black religious thought and the oft-ignorned intellectual arguments that such thinking produces.

Interestingly, towards the end of the text, the most refulgent essays focus on the intellectual contributions of black women. In addition to Manigault-Bryant’s theoretical essay, a piece by Ashley D. Farmer addresses the importance of relooking at history with the recognition that black women were capable of significant scholarship, not timorous and inconsequential accessories to the black men bravely agitating for black rights. Farmer’s powerful essay pointing out that black women produced scholarship that was important to the success of the Black Power movement in the twentieth century is one of the highlights of the text. For black intellectual production to garner the respect it deserves, the recognition of black women’s intellectual labor is critical.

Despite not intending to be encyclopedic, this book is commendably broad in scope and can be used as a primer for a college course on black internationalism. The book leaves readers hungering for more, and realizing that there is more in this tradition to be learned; those responsible for the editorial decisions around these well-written essays should be celebrated. Fundamentally, more books about black thinkers and thought around the globe need to be written and read more widely. Far from merely being adroit at sports and music, African people all over the globe have a storied and impressive history vis-à-vis the production of ideas.

At a time when Internet provocateurs are unwisely pushing the illiterate scam of blackness rooted in American nationalism, black internationalism is needed more than ever to remind people not only of the inarguable reality of global blackness, but also of the intellectual production that diasporic blackness has spurred in a multiplicity of areas. In the face of unremitting oppression, the incontestable reality is that people of African descent have always demonstrated intellectual fecundity. Books like New Perspectives on the Black Intellectual Tradition that highlight facts about the inextricable relationship between blackness and intellectualism not only correct the historical record, but inspire the next generation of black thinkers around the globe who will continue the scholarly work of their forebears.

Chidike Okeem is a writer and an assistant professor of criminal justice at Western New England University.