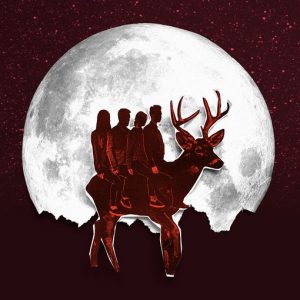 Will Arbery has described his new play as a six-part fugue. Its subject—the kernel from which the rest of the work springs—is a concrete chunk of life rather than an abstract concept. Sitting on his back porch at dawn, a lone hunter puts down his coffee mug, picks up a rifle, aims. There is a moment of tense silence, and then a gunshot accompanied by a muzzle flash. The man returns from the shadows bearing a deer carcass on his shoulders. He dumps his burden on the porch, draws a gleaming, curved knife, and, kneeling at the ad hoc altar, begins to gut the dead animal as the stage goes dark.

A concentrate of meaning, this sequence is inverted, echoed, and restated in increasingly high-strung variations over the play’s two-hour run time. As to what the subject means, exactly, recall that medieval tradition regards the stag as a symbol of Christ, an allusion surely not lost on the playwright. Raised in the Catholic Church by conservative academic parents, the thirty-year-old Arbery has since distanced himself from their religious and political creeds. Yet in Heroes of the Fourth Turning he has created a work of pungent Catholic sensibility. His grotesque characters—grotesque at times to the point of miserabilism—are wracked by Gethsemane-like anguish. As they figuratively and literally spill their guts, argue about abortion as our era’s Holocaust, and predict civil war, every line spools out from the opening scene’s evisceration.

Holding the knife, the hunter’s hand shakes visibly; bloodstains on the porch refuse to come out despite repeated scrubbings. It’s a botched sacrifice, then, and soon gives way to other images of ritual breakdown: a dead campfire; a group rosary interrupted by a spray of vomit; a house blessing that fails to take. Tensions rise with no cathartic outlet; an ominous darkness descends. To underscore this, Arbery has set the play in August 2017, just after Steve Bannon’s ouster and the Charlottesville rally, and just before the solar eclipse. The Wyoming town where the action unfolds lies in the path of totality.

Heroes would appear to channel the dread of shell-shocked urban Hillary voters and rattled never-Trumpers. But the play has transposed their gloom onto four twenty- and thirty-something classmates from a rural Catholic college who all voted for Donald Trump, some more reluctantly than others. They have reunited to toast Gina (Michele Pawk), the school’s new president and their former professor and mentor. Each character stands for a shade of the conservatism at which Arbery is lovingly, and relentlessly, taking aim.

As they await Gina’s arrival, the four perch on stumps or recline in folding camp chairs under the stars, their conversations periodically interrupted by the shriek of a malfunctioning generator, which Arbery says is the “terrifying and random” sixth voice in his fugue. The gathering veers from perfunctory hugs and pleasantries to oversharing, insults, and the sort of generalized toxicity fostered by unresolved resentments, too little sleep, and too much whiskey.

Early on, Teresa states the fugue’s countersubject in a rapid-fire monologue on Marian piety. The Incarnation shocks us with an outrageous specificity—this virgin at this intersection of time and space as a conduit for the whole world’s salvation. Unless we tap into that “particular, written, incarnate, natural Christian good,” she says, we will devolve into a “throbbing mass of genderless narcissists.” Her speech sets up one of the play’s ironies: even as they celebrate the “thisness” of place and body, pitting (as Justin puts it) the “grit and toil of suffering in the name of Christ” against disincarnate ideologies, Arbery’s characters stir up drama lingering from their college days. Under the spell of envy and jealousy, their identities blur; they lose control and lash out at each other, becoming like those they attack.

The play’s title riffs on The Fourth Turning, a 1997 work of historical prophecy by Neil Howe and William Strauss known to have shaped Steve Bannon’s thinking. From victorious post–World War II highs through decadence and unraveling, the book argues, we have entered a period of crisis that calls for youngish heroes to step up and seize power. Where ambitious Teresa sees an opportunity, the others just seem depressed. Justin vents his anguish in a fable-cum-children’s book project, “The Grateful Acre,” about a primordial piece of earth that is witness to mankind’s creation, rise, and eventual extinction. In a similarly chilling fantasy, Kevin speaks of nuking the culture’s sinful dross in a huge, purifying explosion. Given their despair, it is little wonder that, although they debate fiercely about who is to blame for abortion, none of these characters has yet started a family. Teresa admits that she is afraid to.

When Gina finally shows up, she seems both more authentic and more idealistic than her former students. Her eight c-sections (“I did it for God,” she says) bear witness to the scandal of incarnation more persuasively than could any glib speech. Chastening Teresa for her pivot to the alt-right, she maintains that for a woman, true strength lies in motherhood. She praises the delicate sensuality of Hayes Code-era cinema, hopes for Pence to replace Trump, and unaccountably refuses to add training in the art of war to Transfiguration College’s classical curriculum. Nor will she acknowledge that anti-big government localism à la Goldwater and Buchanan, both of whom she supported, was encoded racial politics. In the eyes of Teresa and Justin, all of this is so much blindness and wishful thinking.

Arbery plainly loves his conservative characters for their weaknesses and contradictions, but without feeling much of any intellectual kinship with them. This gives him the negative capability to bring red-state mores into coastal safe spaces, bridging our country’s divides through art. In many ways he has pulled off this unlikely feat, as positive reviews across the political spectrum attest. He deserves praise for depicting Trump voters as relatable BoJack Horseman fans rather than as angry losers or bigoted Bible thumpers—or rather as angry losers and Bible thumpers who are also fans of BoJack Horseman. And for pro-life conservatives accustomed to having their views shut down, seeing those same views forcefully expressed on stage in New York is a gratifying novelty. Yet we can also understand the play as an estranging mirror that lets secular urbanites glimpse their own messed-up lives and shrill rhetoric through a glass darkly.

Whatever reading you choose, Heroes is a work both of and for our hyper-politicized era, not only in its compelling portraits of young conservatives, but also in its overwrought emotions. Arbery uses a gothic aesthetic reminiscent of Flannery O’Connor to express his characters’ foreboding, their sense that reasoned discourse has broken down and violent forces have been unleashed. Dread-inducing sound effects, vomit, and some creepy glossolalia hint at the demonic, a suspicion seemingly confirmed by a late plot twist, as well as by what an awful mood the characters are in. At one point, puzzled by the bad vibes, Gina asks in exasperation why everyone is so sad—like Dante’s, Arbery’s devil is a weepy Debbie Downer.

Had the play taken these supernatural elements more seriously, they might have elicited something like a genuine shiver. As mere metaphor for conservatism’s somber turn, they feel somehow tacked on and half-hearted, lacking in artistic punch. They also seem a touch incongruous. Sure, weird mirroring effects have made the country’s extremes look alike in many ways. But still: are rosary-carrying Catholics truly the Americans who most resemble Dostoevsky’s demon-possessed nihilists? I don’t buy it.

The more I pondered, though, the more this incongruity became a test of my Pharisaism. Would Arbery’s porn-addicted, coke-sniffing, suicidal characters make more sense as godless pagans than as conservative believers? Maybe. But to consign these broken souls to the enemy camp—it hardly matters which one—would be to undo the artist’s hard work. It would mean sacrificing a universal truth about our fallen nature to the satisfaction of being right. Its editorializing aside, Heroes of the Fourth Turning is not just gut-wrenching drama. It is also an examination of conscience.