Saint Louis and the Convert Immigrants 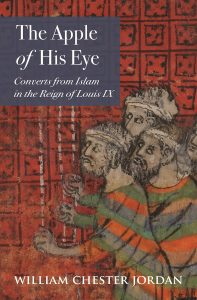 The Apple of His Eye: Converts from Islam in the Reign of Louis IX
by William Chester Jordan.
Princeton University Press, 2019.
Hardcover, 200 pages, $35.

My suspicions are that barely a minority of well-read conservatives with an avid but non-professional interest in the Middle Ages will readily recognize the name of Professor William Chester Jordan, chairman of the history department at Princeton University, former director of its medieval studies program, and vice president of the Medieval Academy of America—a distinguished mainstream academic who worked his way up to the Ivy League after being born to a black family in 1948 Chicago, back in the days when racism still was a very real and very widespread problem in our country. As an academic historian whose job (at least largely) is to accurately reconstruct the facts of history, rather than moralize about them, there is nothing I can recall reading in his work that gives much indication of his political positions. What I have found is the exhaustive research and objectivity of an honest scholar—a combination that ensures that his writing conclusively refutes many of the black legends with which the medieval period has been saddled, legends built on interpretations grounded in leftist bias and propagandistic purposes.

Jordan’s latest volume, The Apple of His Eye: Converts from Islam in the Reign of Louis IX, epitomizes both factually accurate and “politically incorrect” historical writing—showing decisively that a medieval crusading king who strongly promoted the conversion of Muslims to the Catholic faith, and has since been canonized as a saint of the Catholic Church, was a truly good human being.

The book starts with Louis’s participation in the Seventh Crusade, and though it does not defend crusading in principle it demonstrates that King Louis IX was a humane war leader motivated by conviction rather than hatred. In opposition to the practice common among military men of all ages (and to which the medieval period was no exception, despite the injunctions of the Catholic Church), he not only insisted that the families of Muslim soldiers were not to be harmed but also issued an order to spare the lives of adult civilian male Muslims who resorted to violence only to protect their families and private homes from imagined threats. Too many others who took part in the crusades did indeed commit the type of misdeeds of which Louis was accused, but Middle Eastern texts criticizing his supposed cruelty are either of too late a date to be reliable or repeat stories first put out by propagandists for the Holy Roman Emperor Frederick II in support of his political and military campaigns against Louis and the papacy.

Viewing war to liberate the holy places in and around Jerusalem as an unfortunate necessity consequent upon others’ earlier acts of aggression, Louis was enthusiastic about his other goal in Palestine—the peaceful conversion of Muslims to the Catholic faith. His efforts to protect these converts from the violent retribution and death with which they would have been threatened in their homeland by their former coreligionists forms the main subject of The Apple of His Eye. Transportation to France and necessary material support once they were there were provided to the converts at royal expense. All convert immigrants were qualified to receive a lifetime pension, and warm clothing was provided annually to the poor and lepers until they were able to become self-sufficient. Even when royal finances became tight in time of famine there was no slackening in aid to the converts, the king finding other areas (including ones many other rulers would have prioritized) within which to cut expenses.

Ensuring that the immigrant converts were accepted by and into French society was central to King Louis’s policies. He encouraged French men and women to marry the newcomers, and made it particularly attractive for aristocratic women to do so by taking them under his personal protection. To prevent the immigrants both from being isolated in a foreign land and from forming communities large enough to evolve into a distinct and marginalized minority group, homes were found for them in small clusters throughout northern France (far from the coast of the Mediterranean Sea and its Muslim pirates). All new homes for the converts were to be located on the royal domains over which Louis could exercise strong control, rather than on the lands of the quasi-independent feudal nobles, whose attitudes to the newcomers (and indeed to anyone else) could vary from positive to negative extremes. To ensure that the convert immigrants were not harassed, bullied, or threatened by anyone, including by organs of local government, he created the office of “enquêteur” to oversee the immigrants’ needs and address their grievances.

For the most part, however, the convert immigrants did not meet with notable hostility, or at least not with more than would have been met by any other Catholic foreigners who chose to settle in France. They were soon performing the full range of jobs and becoming integrated into the full range of social classes for which their experiences, their abilities, and their social statuses in their homelands had made them suited. Some rose high in government service. It was an age in which Catholicism was expected and non-Catholics viewed with suspicion, and it was an age in which foreign birth was no strong obstacle to any Catholic gaining acceptance as an equal. Converts from Judaism who had spent their entire lives in France tended to make the transition effortlessly; suspicion of and hostility to such converts developed only in later centuries.

Treatment of Jews in Louis IX’s France, though not central to Jordan’s story, is another matter on which The Apple of His Eye sets the record straight. Prior to departing on crusade the king ordered all usurers expelled from France. Once he was gone many local government officials used this as an excuse to expel all who professed Judaism (as distinct from ancestrally Jewish Catholics, whether converts or otherwise)—which was not only at odds with the royal command but violated the regulations laid down by the Church. Some officials did this in the prejudiced belief that most Jews were usurers. Others used such an accusation as an excuse. Returning from Palestine to find much of his country’s Jewish population expelled, Louis not only invited the exiles to return but ordered that restitution be made to them for any material loss they had suffered.

The unauthorized expulsion of the Jews also provides information that allows Jordan to clarify misunderstandings about the numbers of converts in this period. Though contemporary Catholics recorded Louis’s success in leading Muslims into the Church, many subsequent writers have dismissed such claims as hagiographic legends, assuming that adult converts living in France shortly after Louis’s return must have been French-born Jewish converts and that Muslim converts must have been orphaned children brought back from the Middle East. In fact, however, the proportion of Jews that had been expelled from France and the number of adult converts living in the country in the aftermath of the crusade proves that there was a notable influx of adult Muslim converts, and of entire convert families, into France. It is virtually certain that the sainted monarch’s early hagiographers exaggerated the numbers, numbers which the limitations of medieval record-keeping leave ambiguous and open to debate, but in comparison to population rates of the time it was, though a minor migration, not an insignificant one.

This last point exemplifies what The Apple of His Eye accomplishes—demonstrating that King Louis IX’s early Catholic chroniclers present us with a picture of a man that is substantially accurate in its broad outlines. Yes, the details could be exaggerated. Yes, more modern and scientific approaches to the study of history can help us separate fact and plausible speculation from exaggeration and legend. But pseudo-sophisticated skepticism is not the way to arrive at more accurate historical knowledge.