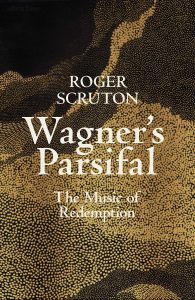 “We have been called not to explore the world, but to rescue it. In doing so we emerge from our trials and conflicts in full possession of our social nature. Like the Redeemer, we make a gift of our suffering, through an act of consecration that brings peace to us all. Whether or not there is a God, there is this hallowed path towards a kind of salvation, the path that Wagner described as ‘godliness.’ That is the path taken by Parsifal, and it is a path that is open to us all.”

Thus concludes the culminating chapter in Sir Roger Scruton’s Wagner’s Parsifal: The Music of Redemption. The world lost an undeniable champion of humanity, the arts, and intellectual civility in the passing of the great Roger Scruton in January 2020. Nonetheless, like all intellectual titans, he lives on through the thought he bequeathed to the world in his writings and lectures. None will prove to be more decisive than his accidental trilogy on Wagner, the final volume of which is a brief but insightful tour into Wagner’s last operatic masterpiece.

Since the time of at least Walter Benjamin (1892–1940), cultural criticism has become the domain of revolutionary activism—socialists, critical theorists, and post-Marxists all vying to one-up each other in their newest radical revisionist interpretation of some precious work of art, music, or literature to explain how bad White Western elitism is. Even Benjamin must be turning over in his grave at what his spiritual children have done and become; at least Benjamin politicized art and culture to advance the proletariat revolution that didn’t call for the burning and destruction of the treasures of the Western artistic spirit as is the case today.

No artist has fallen as far as Richard Wagner (1813–1883) in the desecration of the Western artistic tradition. Derided as a proto-Nazi, an anti-Semite, and a misogynist, just to name a few supposed crimes, Wagner’s operatic cycles and their splendid music are often cruelly mocked in their stage performances. The wonder that Wagner sought to capture in his compositions is cruelly scorned; rather than the enchanting world that he envisioned, crude materialists and satirists reinterpret Wagner to fit the prevailing zeitgeist while poking fun at the musical genius.

In a time not far different from our own, Wagner believed that the purpose of art is “to salvage the kernel of religion, inasmuch as the mythical images which religion would wish to be believed as true are apprehended in art for their symbolic value, and through ideal representation of those symbols art reveals the concealed deep truth within them.” And this is the starting point that Scruton makes clear in beginning his treatment of Wagner’s final masterpiece. Wagner’s “quest,” as Scruton puts it, is to probe the yearning of the human soul for the divine, for “godliness,” and to rediscover the sacred in the relationships we have in this world.

Parsifal (1882) is undoubtedly an enigma to many. It is therefore apt that Scruton has an entire chapter called “Confronting the Enigma” in which he begins our pilgrimage into the world of Wagner’s romantic imagination. Invariably, many concerns arise concerning any wrestling with Parsifal. Is it Christian? Is it Buddhist? Is it folklorist paganism dressed in Christian iconography? What about the realities of sin, love, and redemption?

Scruton doesn’t shy away from trying to answer these enduring questions, at once concerning the universality of human nature (sin, desire, love) and concerning of the particularities of Parsifal itself (its use of Christian, Buddhist, and Germanic folklore in its composition). The sage of Albion makes clear that while Wagner blended Christian, Buddhist, and Germanic folklore as one, the overall theme is essentially Christian in spirit. The virtues of chastity, compassion (agape), and overcoming the lust to dominate truly govern the movement of the opera. Wagner’s humanistic Christian ethic may be devoid of the divine in Christ, but it retains the very impetus of ethical Christianity and the insights of Christian theology concerning the problems of hatred, lust, and love—something Scruton is clear to point out that dominated German intellectual culture in the nineteenth century.

“Parsifal,” Scruton writes, “invites us to believe in the Redeemer.” But what kind of Redeemer are we in need of?

The world, according to Wagner, is one in which the right relations with other have been ruptured: men and women, man and neighbor, man and the world. This is not altogether removed from the insights of St. Paul and St. Augustine. Augustine, especially, noted that the consequences of sin have been alienation from others and the world leading to the libido dominandi (lust to dominate) where man butchers and enslaves others and desecrates the world for his own maniacal desires. Insofar as our world is plagued by ruptured relations, a lack of compassion to others, and the lust to dominate, there is much to commend in Wagner’s probing of the human soul and psyche in Parsifal.

In fact, the principal characters all reflect, in their own ways, this “fallen” condition in which we find ourselves. Klingsor, the magical domineering villain, far from a mere antisemitic archetype, is a universal fallen man who seeks the Spear of Destiny as an instrument of domination. Klingsor represents the spirit of Cain, the individual overcome by hatred who is subsequently moved only by the lust to dominate others and, ultimately, the world. The apple doesn’t fall far from the tree in this regard. Just look around to see a million little Kingsors in our streets.

Amfortas is akin to wounded humanity writ large. He has taken an oath which he has forgotten; much like man’s desire for communion which is subsequently shunned in favor of mundane and trivial things. Amfortas, moreover, is the archetype of wounded man in need of salvation. But this saving comes in the most unexpected form. As the Grail prophecy proclaims: Durch Mitleid wissend, der reine Tor, salvation and redemption will come in the form of a “pure fool, knowing through compassion.”

That pure fool who exudes compassion for others is Parsifal. Parsifal is not so dissimilar from us. He is a human being, young and exuberant, called to adventure and growth. From unconscious to consciousness, Parsifal transforms from the free-frolicking hunter in the wood who killed a swan to a noble figure who resists the enslaving temptations of eros and grows in the virtue of chastity leading to his ability to save Kundry (by denying her sexual advances) and Amfortas (and ultimately the entire Grail kingdom) by using the Spear and Grail as instruments of healing instead of domination. Parsifal is the pure fool who bleeds with the spirit of compassion. The Spear and Grail can be used as instruments of power, of domination, of world transformation for self-gain and purpose (as Klingsor desires). Yet Parsifal wields the Spear and Grail as instruments of sacramental healing.

Parsifal, as we witness, is an individual who ultimately comes to serve others. In service he helps restore the right relationships lost in the mythic, primordial past. Parsifal’s compassion is his strength, contrary to Nietzsche’s denunciation of compassion as folly and weakness.

The ideological wrecking ball that has struck so decisively against Western art and humanities is, in this little book, countered with splendor, insight, and respectful criticism. Scruton provides the context, the philosophical and theological genealogy that influenced Wagner, and an analysis of the development of Parsifal that is accessible and illuminating. Moreover, Scruton wrestles with some past and contemporary revisions of Wagner, discussing in his genial manner their strengths, weaknesses, and ultimate shortcomings. And Scruton also provides his august explanation of how the music works, from the principal leitmotifs to the stirring pieces of instrumental rapture that help foster an aesthetic of awe and wonder that lifts us up to the good things the heavens hold. There is a little bit of everything for the student of Western art to glean from the mind and pen of the “philosopher on Dover Beach.”

Looking at the signs of our own time we would be wise to listen to Parsifal and become enchanted by its message once again. Far from more hatred and revulsion, our world needs more compassion, which leads to healing. Agape truly “is a path that is open to us all.” Through agape we may very well find godliness instead of the demonic, life instead of death, beauty instead of desecration.

Paul Krause is a writer, teacher, and campus minister. He is a senior contributor at The Imaginative Conservative and associate editor at VoegelinView.