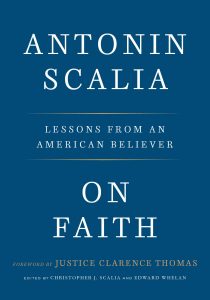 Antonin Scalia was a faithful and patriotic man who devoted his life to the service of others. As a traditionalist, he defended the Constitution, held to his faith, and prized his family and friends. In this respect, his life might seem to have been remarkably simple, but the simplicity was deceptive. Behind it lay immense learning, curiosity, and a depth of understanding that few on or off the Court have matched. His death in 2016 was a very great loss, but we are fortunate to have two volumes of his writing in print and the possibility of more in the future.

On Faith follows the widely praised volume Scalia Speaks, both of them posthumous collections of Antonin Scalia’s writings co-edited by his son Christopher J. Scalia and Edward Whelan. On Faith focuses more narrowly on the nature of Scalia’s Catholic faith and the relationship of that faith to his work, family, and other aspects of his life. The book’s subtitle, “an American believer,” is aptly chosen, for along with faith and family, Scalia treasured his American citizenship. Taken together, the essays in this volume comprise a remarkable meditation on the nature of religious faith and its relationship to the world of affairs.

In his work as a judge Justice Scalia was an “originalist” who believed that he must interpret laws according to the original meaning of the Constitution. His interpretation of the Constitution was guided by his incisive study of the legal, historical, and intellectual context in which it was written. His job was to determine what the Founders meant and apply it to the present day. As he pointed out, for those who hold to the idea of a “living Constitution,” what the Founders intended is irrelevant. Indeed, one might as well not have a Constitution since its meaning is beside the point. A “living Constitution” can mean whatever one wishes it to mean.

Scalia understood the profound implications of this perspective for the future of both the Court and of the nation. If justices were no longer to be guided, and restrained, by the text of the Constitution, the result would be the politicization of the Court, and, as a corollary of that, the appointment process would be turned into a battleground of ideological skirmishes and litmus tests. It is telling to note that Scalia, despite his conservative bent, was confirmed by a unanimous vote of the Senate in 1986. Brett Kavanaugh, who may be less of a traditionalist than his predecessor, received only one vote from forty-nine Democrats and was forced to endure weeks of withering personal attack. The Kavanaugh confirmation hearing was precisely the sort of spectacle Justice Scalia predicted. The nature of the Court, too, has shifted, as Scalia predicted, from the disinterested judicial branch that the Founders intended to an ideological body that is, in effect, elected—by virtue of the public’s ability to control appointments by electing presidents and senators—and that increasingly views its purview as that of making rather than interpreting laws. Also lost, in the Court as in society at large, is the ability to discuss matters reasonably—the very foundation of a working democracy.

Justice Scalia understood the damage that the politicization of the Court would bring, but he was strong enough in character to resist this corruption of the Founders’ intent. Although he was pessimistic about the short-term future of the Court and the country, Scalia stood above the divisiveness of our times, and the source of his strength was precisely that which he defines in his essay “On Being Different—the Christian as Pilgrim.” Herein, he writes that “the ways of Christ and the ways of the world … are not the same, and we should not expect them to be.” To some extent, a man such as Scalia must always live “apart” since America, as he saw it, has entered a third phase from its original condition of being a Christian nation to that of an increasingly secular nation inspired by Christian ideals to one in which there seems “no preference between religion and irreligion.” For Scalia, every hour of life was weighed against the First Things, that profound body of teachings passed down by our ancestors. For such a man, having sworn an oath to defend the Constitution and having sworn an even greater pledge of faith in God, judicial opinions are not simply ad hoc pronouncements of what seems right for our age: they constitute an effort to reconcile present-day issues with the wisdom of our ancestors. Lacking that wisdom, the nation lacks the moral foundation that the Founders knew to be essential to its survival, and that foundation is intrinsically religious in nature.

It is important, however, to recognize that Justice Scalia always maintained a strict separation of his faith from his work on the bench, a point that he explores in several of the essays in this collection. His opposition to Roe v. Wade, for instance, was not the product of his Catholic beliefs but of his reading of the Constitution itself. Regardless of his personal viewpoint, which was deeply opposed to abortion, Justice Scalia decided this and all other issues on the basis of his interpretation of their legality and constitutionality. The Constitution is a “fixed and limited text,” and nothing in the text can be construed as either affirming or banning abortion as a right. Even for a man of deep faith, perhaps especially so, the duty of ruling objectively must be the preeminent rule.

A related issue is the question of the role that religious faith should play in the life of the nation in general. In “The Two Kingdoms—Christians and State Authority,” Scalia argues that religion has and must always play a large role in American life. Quoting our founding documents and alluding to our traditions and practices rooted in religious tradition, Scalia points to the many ways in which religion serves as an indispensable basis of our nation’s identity. The effort now underway to ban religion from the public arena will, if successful, destroy the “common fabric of morality,” with disastrous consequences. While Scalia acknowledges our tradition of separation of church and state, he finds that that principle is being used to attack religion in ways that have no basis in the Constitution.

As Paul Scalia pointed out at his father’s funeral mass, “there is no conflict between loving God and loving one’s country,” and certainly this was true in Antonin Scalia’s service on the nation’s courts. If anything, the conflict can be said to be between irreligion and public service, for too often the nonreligious appear to be intent on banning religious expression, an effort unsupported by the Constitution and, indeed, specifically precluded by it.

Scalia expressed his high ideals of devotion and service in every aspect of his life, and his writing style, with its wonderful lucidity, warmth, and good sense, is a marvelous reflection of this extraordinary man’s intellect. Asked about what goes into “good writing,” Scalia responded, “hard work and sweat.” That quality of care is apparent in everything he wrote, from major decisions and dissents on the bench to the seemingly small matter of a high school graduation addresses. Had he not chosen to enter the law, Scalia might easily have become an outstanding professor of English (though for the sake of our country, we are blessed that he did not). His comments on Emerson in Scalia Speaks attest to his incisive reading of a literary text. Scalia’s analysis of the famous line from “Self-Reliance” (“A foolish consistency is the hobgoblin of little minds”) is worthy of PMLA, though it is unlikely that that inscrutable journal would have published it, what with Scalia’s plain common sense and clarity of expression. “At the risk of being considered a little statesman, a philosopher, a divine, or even an aged lady,” Scalia writes, “this strikes me as unmitigated nonsense.” Then, to secure his point, Scalia insists, “Consistency is the very foundation of the rule of law.” There is enough in this brief critique of the New England bard to form the basis of an insightful Ph.D. dissertation.

Antonin Scalia’s life was grounded in his enduring faith in God and devotion to his family and country. He fought a daily battle in defense of what he believed, but he understood, as wise men do, that the victories and failures of the moment are as nothing in the scale of God’s plan for humanity. Scalia’s legacy lies in his reaffirmation of the truth that one must honor the wisdom of one’s ancestors, hold steady to one’s ideals, and, above all, uphold one’s faith in a loving and redemptive God. In the years to come, critics may come to see this remarkable man in terms of these enduring truths and less so in terms of the partisan skirmishes that played such a large role during his time on the Court. Indeed, he may well be remembered not so much as Justice Scalia but simply as Antonin Scalia, a great man of profound faith and love. As his writing continues to be read and published posthumously, Scalia will continue to serve as a moral and spiritual guide to a country, and to a world, increasingly in need of moral grounding and redeeming faith.

Jeffrey Folks is the author of many books and articles on American culture including Heartland of the Imagination (2011).