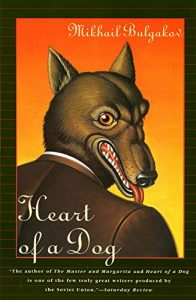 In June, when Black Lives Matter riots erupted in American cities, conservatives began rereading Tom Wolfe for insides on race relations. I, too, dusted off my copy of Radical Chic and Mau-Mauing the Flak Catchers. But once BLM and Antifa moved on to toppling monuments, I wanted a different kind of wisdom, something that dissects not the hypocrisy and venality of the “social justice” mindset, but the phenomenal stupidity of revolutionary consciousness. So I reached for one of the most extraordinary works of Soviet-period Russian literature, Mikhail Bulgakov’s Heart of a Dog.

Bulgakov was born in 1891 in Kiev, son of a theology professor, and a grandson of two Orthodox clergymen. He graduated from a medical faculty, quickly embarking on a successful career as a doctor. He started writing during the civil war that followed the 1917 Bolshevik Revolution, and soon left the medical profession entirely.

Despite the frankly reactionary themes of his work, Bolshevik censors permitted publication of some of the writer’s books and production of his plays. Throughout the 1920s in particular his plays were the major draw of the Moscow Art Theater, practically keeping it alive. It took authorities another decade to raise a generation of socialist writers, and in the meantime they had to settle for the likes of Bulgakov.

The author died from kidney disease in 1940, failing to finalize multiple revisions of The Master and Margarita. Although the novel is widely considered to be his signature work, it at times feels self-indulgent and both overedited and incomplete. The storyline of Heart of a Dog, on the other hand, is perfectly developed, with every line, every syllable in its intended place—a true masterpiece. It’s also the best reactionary work of literature ever written.

Heart of a Dog was one of Bulgakov’s books that was censored during his lifetime. Completed in 1925, the manuscript was not only rejected, but at one point seized from the author. Fortunately, it was returned several years later, enabling its publication abroad in the 1960s and its replication in samizdat. The book officially appeared in the Soviet Union only in 1987, during Mikhail Gorbachev’s Perestroika. The following year it was made into a film directed by Vladimir Bortko. Both novella and movie immediately gained cult status.

The book is set in the 1920s during what can be described crudely as Russia’s jazz age, complete with all the trappings of the contemporary bourgeois decadence, including flappers and saxophones. Such frivolity was possible because, following their victory in the civil war, Bolsheviks abandoned military communism and total property confiscation, permitting small-scale private enterprises. The country perked up a bit, but the change seemed fleeting and unreal. As the seminal Russian poet Anna Akhmatova described it:

Everything started to look as before—restaurants, smart cabmen, beautiful young women in furs and diamonds. But it was all pretend—it was only pretending to be like it had been before. It was all spurious. The past has disappeared irrevocably. Its spirit, its people—the new was only an imitation of the old.

In this atmosphere, Moscow’s foremost playwright created a grotesque and unnatural tale of metamorphosis, betrayal, and counterrevolutionary agony. The novella opens with a howling stray mutt, scorched by hot water thrown at him by a restauranteur, reminiscing about a typist’s stockings. In his trademark satirical style, Bulgakov introduces the reader to an assortment of colorful characters. There is, for instance, Shvonder, a dumb, vulgar, and power-drunk petty Bolshevik of the Housing Committee, accompanied by a young woman who looks like a young man (nothing is new under the sun, not even revolutionary transgenderism).

Because the world Bolsheviks summoned in their capital was warped, each character is comically flawed. Bulgakov’s protagonist, the celebrated scientist Professor Philip Philippovich Preobrazhensky (literally, Shapeshifter) frequently sings off key. His sidekick, the young and handsome Dr. Bormenthal, crosses his eyes on his nose.

Perspectives shift, and most tenuous scenes unfold one after another. Some of these scenes were, no doubt, quite real, witnessed by the author himself in the theater of revolution. The festival of the grotesque continues with passages like: “The physiognomy of Polygraph Polygraphovich appeared in the broken transom under the ceiling and thrust itself into the kitchen. It was twisted, the eyes weepy, and a fresh, bloody scratch flames along his nose.”

Preobrazhensky, the shapeshifter, is both the hero and the evil genius of the story. In the opening chapters he lures in the unsuspecting mongrel Sharik, kills a baby (there is some vague talk of an abortion), and, in a groundbreaking surgical experiment, transforms Sharik into a man under the surname Sharikov. Later, when the experiment goes terribly awry, Preobrazhensky comes out in favor of the conventional approach of making a human, quipping why is it necessary to create a Spinoza if any woman can birth one.

The man Professor Preobrazhensky engineers is no Spinoza. He is, rather, a dim and ungrateful scoundrel, easily egged on by Communist apparatchiks, who wrecks everything and everyone around him—the intelligentsia’s own Frankenstein’s monster. The spectacular failure to create a new and improved human serves as a metaphor for the futility of the Leninist vision of the intelligentsia. The architect of three-quarters of a century of Soviet misery proclaimed the purpose of the intelligentsia to be the vanguard of the proletariat in a socialist revolution.

The figure of Preobrazhensky is as tangled and disjointed as the turn-of-the-century intelligentsia. Yes, the Professor is responsible for the mess, but he alone is capable of mopping it up. That’s why there is a different side of Preobrazhensky, the side that raised the ire of Soviet censors and made Bortko’s film an overnight success. Far less complex than the figure described in the book, the protagonist of the film is unquestionably a charming and positive man. A folk hero to Russian intelligentsia from the moment the movie premiered, Preobrazhensky is a fierce reactionary constitutionally incapable of accepting communism. His very persona forms an answer to Lenin: the true mission of the intelligentsia is not to lead the revolutionary struggle, but to carry civilization.

That other side of Preobrazhensky is a worldly professional dispatching advice on the right way to drink vodka and the best opera to watch at the Bolshoi. He also delivers the most subversive zingers. Among them is the laconic “Yes, I don’t like [the] proletariat” in response to an accusation by Shvonder. Shvonder expects to instill fear by throwing around the claim, but Preobrazhensky merely shrugs it off. Lesson to be learned: always disappoint your accusers.

The worship of the proletariat that saturated Soviet public life until the late 1980s was all phony anyway: the class was exalted inasmuch as it was useful to those in power. Preobrazhensky, on the other hand, gets along with the working people very well, treating them with respect and getting admiration in return. What he doesn’t like is the Communist theology, and he doesn’t accept Communist language.

The book was written two decades prior to Orwell’s Politics and the English Language, at the time when the Russian language underwent multiple painful transformations at the hands of the Bolsheviks. Having lived through a revolution, Bulgakov got a front-row view of the politicization of language and expressed ideas similar to Orwell’s. Certain words, he notes, are used so expansively that they have no meaning. Preobrazhensky singles out the word “counterrevolutionary.” When the powers that be apply it to every activity in order to oppress their subjects—not unlike the way “racist” and “violence” are used today to declaw the opposition—language becomes meaningless. And when language is meaningless, no productive discussion is possible. Just like the erosion of normal sexuality and normal sexual reproduction, it’s a disorienting experience. A society in which language and human nature are negated is governed by raw power. Professor Preobrazhensky’s solution is to refuse to accept such language, to refuse to enter a conversation when the terms are uncertain, and to continue living as he sees fit.

The single most quotable of Preobrazhensky’s lines—and it, too, deals with the use of language—comes from a monologue about the post-revolutionary “ruin.” The Soviets always blamed their economic mismanagement on external forces—wreckers, Hitler, civil war in this case—and here is a venerated Professor, the last remnant of the old regime, who confidently declares at the very beginning of the socialist experiment: “What is this general ruin of yours? An old crone with a crutch? A witch who has knocked out all the windows and extinguished all the lights? Why, there is no such thing! It doesn’t exist. What do you mean by these words? […] It’s this: if I begin to sing in chorus in my apartment every evening instead of operating, it will lead to ruin. If, coming into the bathroom, I will—forgive the expression—begin to urinate past the toilet bowl, and if Zina and Darya Petrovna do the same, I’ll have ruin in my bathroom. Hence, the rack and ruin are not in the bathroom but in the heads.”

Or, as we would say today, decline is a choice.

There is a lot in Bulgakov that a reader may find recognizable in twenty-first century America. For instance, the replacement of arts and literature by cheap propaganda. When Dr. Bormenthal suggests that Sharikov read something uplifting, like Robinson Crusoe, the new man counters that he has no use for it, and that he’s studying the correspondence of Engels and Kautsky. Asked whose side he takes in the debate, Sharikov declares that he doesn’t agree with either because: “What’s there to propose? … They write and write … congress, Germans … who knows them … Makes your head spin. Just take everything and divide it up …” This last line became a popular summation of the seventy years of Soviet rule.

When language becomes an instrument of power, the masses rely on the crudest ideas to justify the most brutal self-interested actions. In place of compassion, achievement, and social responsibility, the Bolsheviks instituted loot.

Heart of a Dog is a snapshot of that world. Turns out, reactionary literature is not full of longing and serenity. It’s satirical, theatrical, with a generous dose of modernism even. It offers memorable lines, and characters that inspire fascination in would-be counterrevolutionaries.

In the final chapter we leave Professor Preobrazhensky sitting at his study, dog at his feet, thinking. Concocting future experiments? A long march? Who knows.

Katya Sedgwick is a writer in the San Francisco Bay Area. She has contributed to Spector USA, The Federalist, and many other publications.