Sophomore Inclinations and the Research University 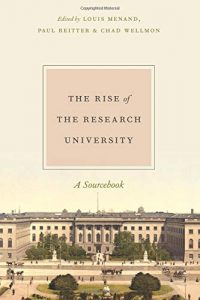 The Rise of the Research University: A Sourcebook
edited by Louis Menand, Paul Reitter, and Chad Wellmon.
University of Chicago Press, 2017.
Paperback, 406 pages, $32.50.

Historians of higher education are members of a small subfield of an increasingly neglected discipline within the contemporary academy, but their topic should be of interest to all of us. For good or for ill, the chief scientific, technological, economic, and cultural currents that have shaped the last hundred years have all passed through, and often emanated from, the modern research university.

The Rise of the Research University is a welcome product of the institution it documents, offered as a stimulus to self-reflection during what some already view as the age of the decadence or decline of the research university. The editors have helpfully documented the conception of the distinctively modern research university in Germany, its migration and adaptation to the United States, and its emergence as our dominant educational institution. Some documents were previously untranslated, others difficult to track down. Even those that were readily available are now conveniently gathered together and put into dialogue. The editors have kept their editorializing to a minimum, except to argue that many of the debates involved in the rise and reception of the research university are echoed by the enduring debates about higher education today.

The collection falls into six parts. Parts 1 and 2 describe the origins of the modern university in eighteenth- and nineteenth-century Germany and the impressions it made on Americans who went abroad in search of models to import. The editors emphasize that the “German research university” was more than a little mythical; but little is more powerful than a myth, and the myth became a model for American reformers.

As the editors point out, the main traits of the fabled German university were the integration of teaching and research, the doctrine of academic freedom, and the unending nature of academic inquiry. The German model offered a stark alternative to the teaching-centered, denominational, and classical colleges of colonial and early-republican period America (to say nothing of the premodern university). Wedded as it was to an emerging cultural, economic, and military powerhouse, the German model proved positively tantalizing to the American reformers who saw the old colleges, and the classical heritage and religious faiths to which they were wedded, as obstacles for the development of the United States into a modern, progressive nation.

Parts 3 and 4 trace the reformers’ attempts, in the second half of the nineteenth century, to uproot the old colleges and replace them with newly transplanted research universities. The American soil was chock-full with classically-minded colleges, each planted by one or another of the churches that had been multiplying for two centuries. The German model found its most hospitable soil in the land-grant universities created under the Morrill Act and a number of wholly new research universities such as Cornell, Johns Hopkins, and Chicago. What often resulted, especially at the old Ivies, was not a transplantation but a somewhat-awkward graft of the German model for graduate studies on top of the American undergraduate college.

Then as now, Harvard set the national tone, and from 1869, Charles William Eliot led the national charge as its longest-serving and most energetic president. Eliot’s transformation of Harvard College into Harvard University, accomplished by reorienting undergraduate education toward the interests of the newly established or incorporated professional and graduate schools, is an instructive case. Eliot cast off the prescribed classical curriculum in favor of “liberty in education,” which meant three things: freedom of choice in studies, the opportunity to win distinctions within a specialized subject (and thus motivation to excel), and an end to the university’s role in loco parentis.

Accordingly, Eliot introduced an entirely elective, unstructured (non-)system for undergraduates. Irving Babbitt would later comment: “The wisdom of all the ages is to be as naught compared with the inclination of a sophomore.” Which is precisely the point. The “wisdom of all the ages” is of little use for a modern, progressive society—especially one that still believed Christian morality would outlive Christian doctrine. The thing most needful is the endless production of new knowledge, which itself requires the production of specialists who will produce said knowledge. The “inclination of the sophomore” is the clue to his ability; the ability of the sophomore is the key to his potential as a researcher; and the sophomore’s potential as a researcher is the sum of his utility for the university and the society it serves.

For Eliot, the purpose of the college is not to induct a student into a tradition, or to lead a student from the cave of opinions to the light of truth, much less to form young men in accord with a definite account of human nature. Nor is it, perhaps more modestly, to educate students in the liberal arts and sciences, so that they might pursue a vocation useful to themselves, their families, and their communities (local, religious, commercial, and national). Rather, the college is the place and time to discern what field a given undergraduate might excel at, so that he could specialize in it, and thus make himself useful to society and humanity. The university thus exists to bring the student up to the bounds of present knowledge in his field and equip him to perform original research, extending the bounds of knowledge ever outward. As Part 5 suggests, the imperative to research logically demands greater diversity and inclusion. Differences of sex (and race) should not stand in the way of the production of knowledge—if not due to the inherent injustice of discrimination, certainly because it would narrow the field in our collective hunt for the best specialists in each field. The research university must draw from the greatest possible pool of potential researchers to discover who will best serve the common project of research, development, and social enlightenment.

Eliot’s expectation seems to have been that precollegiate education would provide a (moral and cultural as well as intellectual) foundation in general, classical education, so that universities could focus on the important task of the advancement of learning. What happened instead—what has been happening ever since—is that American secondary schools began to tailor their curricula to the kind of education offered by universities. Eliot did not mistake “liberty in education” for a liberal education; he merely took the latter for granted, just as so many turn-of-the-century progressives took for granted the moral and social foundations on which their projects were built.

The incoherence in any given undergraduate’s education produced by Eliot’s “total freedom of choice” system inspired the introduction of majors (prescribed courses of study), with freedom to dabble in what time remained. Eliot himself might have recognized the drawback of an entirely unprescribed education: as he ended his forty-year tenure as president of Harvard, he turned his attention to “Dr. Eliot’s Five Foot Shelf,” an anthology that, he claimed, would provide a liberal education to the modern reader who could spare just fifteen minutes a day reading the classics.

Though it was aimed at adult learners, Eliot’s Harvard Classics series indicates the realization, even in the research university’s most ardent advocate, that something was missing in an education composed of a major and electives. Part 6 documents the origin of the final component of the research university curriculum: general education requirements. The overspecialized narrowness of learning produced by the major, and the incoherence and incompleteness allowed for by electives, would be corrected by a foundational course of learning for every student.

Here, the editors leave behind the rise of the research university and enter what is both the era of its manifest dominance and, if we look beyond the centers of the educational establishment, the era of reaction against the very idea of the modern research university. Part 6 focuses on the origins of Columbia’s “Contemporary Civilization” program, which endures in a modified version to this day, and the only somewhat-successful attempt by Hutchins and Adler to institute a program in the Great Books at the University of Chicago. The ramifications from these two institutional reforms spread, in one form or another, to nearly every university in the country. As Gilbert Allardyce has shown, the Columbia program was an early instance of what became a nationwide movement in “Western Civilization” courses in general education, which rose during the first half of the twentieth century and has been in decline since the 1960s.

As for Hutchins and Adler, they—or at least their fellow-travelers in the Great Books movement—would go on to articulate, and begin to implement, approaches and programs that called into question the deepest assumptions of the men who brought the research university to America. This project was undertaken in the understanding that what was lost in the research university was not merely general education but liberal education. Unlike Eliot’s Harvard Classics, the Great Books of the Western World assumed the immediate accessibility of the great minds and works of the past—and, more radically still, their relevance, which is to say, the possibility that such primitives might have something, even everything, important to teach us moderns. In its early phases, this movement was promoted in the service of the liberal-democratic struggle against fascism and then communism. But the possibility raised by the Great Books approach—that premodern thinkers might be wiser than the titans of industry and cutting-edge researchers who funded and founded the modern university—has nurtured the efforts of students, teachers, and communities that are truly postmodern in their approach to education, and which therefore look beyond the research university to alternative models for the proper structure and purpose of higher education.

Eliot once remarked that “the elective system is, in the first place, an outcome of the protestant reformation. In the next place, it is an outcome of the spirit of political liberty.” Since then, the Protestant Mainline has passed from the American scene, the established understanding of liberty has become ever more confused, and the humanity of the progressive, technological superpower ministered by the modern research university has been questioned by the left and the right, the progressive and the traditionalist, the secular and the religious. It should little surprise us, then, that the institution designed to turn the best and the brightest into the specialists who would most efficiently advance the conquest of nature for the relief of man’s estate has been thought a poor field for the cultivation of human flourishing and a poor steward to a free society. By documenting the origins of this institution, The Rise of the Research University is a valuable resource—to those still laboring to repair or rethink the still-dominant model in higher education, and to those seeking to understand the negative inspiration for their own countercultural efforts at liberal education.