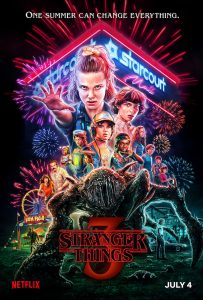 The third season of Stranger Things, the hit science-fiction horror series on Netflix, should have been called “Love at the Mall.” The action revolves around the Starcourt Mall, a new business that is of course killing the town’s mom and pop shops. It’s simply too bewitching for the people of Hawkins, Indiana to resist, despite some protests in front of the mayoralty. Sure, this all-American consumption mecca turns out to be a front for an underground Russian espionage operation, but the mall’s real importance lies right on the surface. It’s where the kids go to discover themselves through shopping.

This is set a year after Season 2 and the kids are all grown up now. Our magical girl, Eleven (“El”), starts wildly in love with Mike, kissing incessantly, to the despair of Jim Hopper, her father by force of circumstance and adoption. But the story turns out to have little to do with love, and much with breakups. Love teaches people to be alone in this story. Eleven apparently needs to break free from the control of these two males, so she instantly makes a new friend, Max (a girl), who takes her to the mall to educate her in the mysteries of American womanhood through the joys of materialism.

These are preteen girls, but they already want to do their hair, pick flamboyant or at least colorful clothes, and try on makeup—they imitate Madonna while the 1985 hit “Material Girl” plays in the background. This is fashion, but also preparation for a future where women make the rules. Moreover, in the land of freedom and equality, it’s difficult to draw lines between adults and children. Accordingly, on Stranger Things, it’s almost always adults, usually parents, who apologize to their children, and almost always the children who scream insults at the adults. The teenage years are a trying time …

But this is more than trying to look adult. Max tells El that she has to discover herself. El asks, how do you learn who you are or what fits you? Max says, you keep trying things on until something really strikes you. The previously tomboy El discovers she’s a girl: What she’s practicing before the mirror, the fashion photographer, and Max, is self-love. If she imitates some model of beauty and comes to see herself as beautiful, then she will love herself. She will need other people less—they will need her more instead.

These couples themselves break up immediately, since they’re all willful children and have learned from the way they treat their parents that if you don’t like something, you start screaming. Of course, parents are stuck with their kids, so they just accept it. But kids don’t accept it from each other. They get a dose of their own medicine and, not only do they not like it, they do not even realize it’s happening. So this leads to boy camaraderie and girl friendship, mutual recriminations, anger, epithets, and heartbreak.

This is presented as a necessary education for life in America. The boys try to get gifts for the girls to apologize for the breakups. There is something innocent in their good intentions, but it turns out they’re too poor for the mall. The girls, however, accuse them of causing everything wrong in their lives and easily win every conflict. Girls are better with words and, with El’s powers, they can even spy on the boys. The boys are simple-minded. They will be bossed around, therefore, and learn to accept it. Love at the mall means everyone falls in love with beautiful things you can buy, which turns out to give girls an advantage.

The mall is paradigmatic of social changes in 1980s America. Among the high-school kids, Jonathan, the weird kid with a talent for photography, gets his girlfriend Nancy an internship at the local paper. This paper is dominated by sexist men who humiliate her constantly and she decides to chase a story to prove she’s superior to all the men. The result is that both she and Jonathan get fired.

Jonathan and Nancy love each other, in a way, and believe in each other, to a point. But they are different. He’s the poor son of a single mother. An internship leading to a job means food and self-respect to him—independence. She’s middle class. Her parents give her whatever she wants, including encouragement to chase dreams and ignore reality. So she promptly accuses Jonathan of being just like the evil men who mock her until he breaks down and admits she’s right, although she doesn’t care at all about his troubles. From then on, he obeys her. She’s more daring because she’s richer—she has options, but he doesn’t.

So also with Steve, Nancy’s popular ex-boyfriend, who befriends Robin (a new girl) while working at an ice-cream parlor in the mall. She’s fluent in four languages, learns Russian in a few days, breaks secret Russian message codes effortlessly, and needles him about his failures with girls. She’s also got a band and has incredibly sophisticated taste in international cinema. He’s dumb; his only virtue is loyalty, and he has no future after high school. So he learns to obey her—she’s the brains, he’s the muscle. In the end, she gets him a job.

The same pattern then affects the adults. Chief Jim Hopper fantasizes he could be manly like Tom Selleck on his favorite show, Magnum P.I. Instead, Jonathan’s mom Joyce, who is hysterical half the time and whom he desperately loves, bosses him around from beginning to end, whether she’s right or wrong. She has learned the modern lesson: Women make demands, not apologies. He learns that his job is to die for her. They both acquit themselves marvelously in their roles.

This sets up the series for the ultimate showdown at the mall, between El, as the most powerful girl, and Billy, her friend Max’s evil step-brother, as the most powerful boy. Billy is also possessed by a devil—a monster called a mind-flayer. El looks into his soul, into memories of his life before he was evil, and finds out that all the therapists are right: the problem is that toxic masculinity corrupted a once-innocent boy who loved his beautiful mother. So this power of womanhood allows Billy to redeem himself by, you guessed it, dying for El.

The mall effects a new moral education in individualism. Stranger Things turns out to be about how to break friendships—not sacrificing for your friends, but sacrificing your friends instead. At the end, Joyce moves Will, Jonathan, and El away from Hawkins, so their loves and friendships are over. Needless to say, no one mourns Hopper. Childhood experiences apparently are a preparation for loneliness. If love and friendship were skills that required training and execution, this wouldn’t be a problem. But what if they’re not? What if your past is an important part of who you are?

The revelation of the mall turns out to be a future-oriented individualism. Shopping as self-discovery means you don’t need to be tied to other people—you can satisfy your desires instead. Maybe it’s woke capitalism: Corporations trying to sell people on their products by pretending to be Progressive moral crusaders. Maybe morality turns into advertising, which fits TV shows, since TV has always been about advertising. I guess we call it virtue signaling now. You get new identities this way.

But there’s more to this: Shopping avoids the dangerous things boys are attracted to—that’s an entirely different world we had all signed up for with Stranger Things, until the show turned around on us. We hoped we’d learn what friendship is about, and I daresay we all hoped we’d learn that friendship is for life—that some experiences define you and make it possible to have a future together with other people. Audiences didn’t just enjoy the boys’ innocence and nostalgia for the 1980s, but we nursed the hope of an affirmation that there’s something noble in confronting evil and that friendship would point to some eternal truth. This latest season says nope. Be realistic. Nothing lasts in America. Move on. The girls win the boys’ show, too. Or as the girls might say, it’s not losing, it’s just learning to see things differently.