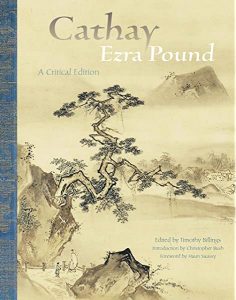 The Bughouse: The Poetry, Politics, and Madness of Ezra Pound
by Daniel Swift.
Farrar Straus and Giroux, 2017,
Hardcover, 320 pages, $27.

What are we to do with Ezra Pound? One answer would be to “cancel” him, to dump his statue in some river and let the water erase it. This wouldn’t be without cause: calling his politics and personality repugnant is an understatement. But it would also be too simple. Pound’s fingerprints are everywhere: most famously on The Waste Land, but also on the careers of Yeats, Frost, William Carlos Williams, and H. D. (Hilda Doolittle); on the publication of Joyce’s Ulysses; on Imagism, Vorticism, and the “New Poetry” that emerged in Poetry a century ago. He was, inescapably, one of the pivotal figures of twentieth-century literature.

If we have to live with Pound, the necessary question is how: merely as a player in literary history or also as the author of literature still worth reading? Two recent—and very different—works offer their own ways of approaching him. Daniel Swift’s The Bughouse: The Poetry, Politics, and Madness of Ezra Pound (2017) guides a popular, if highbrow, readership through the decade Pound was institutionalized at St. Elizabeths Hospital in Washington, D.C.; while Timothy Billings’s Cathay: A Critical Edition (2019), presents a meticulously researched textual guide to the composition of Pound’s 1915 breakthrough of translations (or “translations”) from Chinese poetry.

The Foreword, Introduction, and Editor’s Introduction to Cathay: A Critical Edition make the case that we should not really read these poems as Pound’s work, per se, but “as a link in a series of compilations, glosses, and creative rewrites,” “textual collaborations” with the original authors and the many figures who mediated Pound’s encounter with them. The narrower (and admitted) goal of this approach is to circumvent the longstanding arguments about Pound’s accuracy and authenticity as a translator and to focus on his textual process of translation—all for the best. But one can’t help noticing another effect: to separate the poetry from the poet, dissolving Pound’s authorship in order to absolve the words.

Billings performs meticulous, detailed, and traditional textual scholarship: transcribing, annotating, collating. Ultimately, these labors belie the notion that Pound’s singular authorial role could ever have been a merely contingent link in textual transmission.

Cathay, Swift’s account contends, “invents modernist poetry.” Like all claims about modernism’s origins, this is an overstatement invested in literary mythology. But its point is worthwhile: in their moment, these two dozen translations from classical Chinese poetry (and the Old English “The Seafarer”) weren’t just an obscure work of antiquities. They were living poetry—something new. Of course, translates has always been a contentious verb here: Pound didn’t know much Chinese at all. Instead, he worked from the notebooks Ernest Fenollosa, an American art historian, had used to study with two Japanese scholars, Umewaka Minoru and Mori Kainan.

For over a century, critics and scholars have argued about Pound’s methods of translating, his errors and his inventions, without careful or systematic reference to the documents from which Pound worked—despite their availability in Yale’s special collections. Billings transcribes and assembles these “cribs” as the back matter to this Cathay, the bulk of the volume. The layout does present a multi-authorial snapshot: First, the Chinese characters themselves; beneath them, the romanji transliteration; then a word-by-word gloss of literal definitions; “paraphrases” offering the sense of the whole line; and, lastly, Pound’s published translation. The five layers repeat, line-by-line, for every poem, emphasizing one of Billings’s more remarkable discoveries: that Pound’s practices of translation grew out of a traditional Japanese reading practice called kundoku, or gloss-reading. It’s a three-stage process that Ernest Fenollosa’s teachers employed: read aloud one line at a time; succinctly parse each character, including multiple meanings; create an intelligible paraphrase, or translation, of the line. The result, in the notebooks, are glosses and paraphrases that often disagree by design. As Pound translated, he erred on the side of the glosses—leading to moments of insight and of error.

Billings terms Pound’s method of working from these “the calque,” or “a transfer of lexical meanings so ‘literal’ that it imposes its foreignness unidiomatically on the new text.” In the hands of a lesser poet, this could easily be as disastrous as the floridly idiomatic renderings of late-nineteenth century translations Pound both rejected and consulted. In his critique of Richmond Lattimore’s 1967 translation of Homer, “Another Odyssey,” Guy Davenport observes that “Translation involves two languages; the translator is in constant danger of inventing a third that lies between, a treacherous nonexistent language suggested by the original and not recognized by the language into which the original is being transposed.” This is the technique of Pound’s calquing—and it highlights how essential he is to the process. The third line of “Poem by the Bridge at Ten-Shin” reads, in Fenollosa’s gloss, “Morning become cut/rend intestine flowers.” Paraphrased, it’s “In the morning they are unbearably beautiful flowers.” Neither leads inevitably to Pound’s imaginative, unidiomatic, and yet far superior, “At morning these are flowers to cut the heart.”

The English language may never see another editor quite like him. The same methods he would use to chisel his “Homage to Sextus Propertius” from the Latin, various Cantos from Latin renderings of Homer or the correspondence of Sigismondo Malatesta, or The Waste Land from Eliot’s meandering “He Do the Police in Different Voices” drives his process here. If Cathay really did invent modernism, it was by honing Pound’s editorial prowess. Cathay’s textual history may have been complex and involved the collation of multiple voices, but, inescapably, it is also the work of Pound’s idiosyncratic and erratic genius.

Billings’s Pound disappears into textual history. Swift’s was never there at all: in The Bug House, the aging, institutionalized poet is a cipher for those who come to visit him at St. Elizabeths. Encounters with his contemporaries (Eliot, William Carlos Williams), rising poets (Elizabeth Bishop, Robert Lowell, Charles Olson, John Berryman, Hugh Seidel), and his doctors guide the structure of Swift’s account of Pound’s decade there—as do other, more ephemeral figures who drift onstage from the neo-fascist margins of American and Italian politics. All find in Pound what they want (and perhaps need) to find: a model of resistance to poetic conventions, an antagonist, a mentor, an elder poet also grappling with madness; a celebrity patient; an economic and political theorist whose works root out a global conspiracy of usurists (Jews, capitalists, militarists, mongrelizers, and more Jews). Insofar as it offers these narrative snapshots of a moment in literary history, this has value: Pound serving less as a forebear than as an object of cultural significance in the 1950s, like Ozymandias’s pedestal come to life, or the ruined Lady Liberty in Planet of the Apes.

But Swift frames his study as his own attempt to visit with Pound—and as ours. “Pound at St. Elizabeths is the riddle at the heart of the twentieth century,” he writes; “Pound’s contradictions remain with us. They are the uncertainties of our time.” But after 260 pages, Swift can reach no answer. Pound is contradictory. He (and his verse) probably can’t be trusted, but also can’t be dismissed. The book’s closing image is Pound, free in 1959, waiting for the director of a BBC documentary to tell him what to do: a figure whose meaning must be created by someone else. Pound is always only what we make of him.

This is the worst of all worlds: a way of accidentally absolving Pound of his sins while dismissing the poetry as at best secondary to the empty vessel of his biography. Swift makes the same mistake many of Pound’s guests did: he visits and expects to learn something. Nearly a century after the New Criticism excised author and context from consideration, we’ve come full circle, subordinating poetry to psychology, politics, and personality. This isn’t Swift’s fault; it’s the condition both of much of what passes for literary criticism and our contemporary notion of poetry as mere “self-expression,” a way to be “heard” in all your “individuality.”

But if we’re to be totally honest, Swift’s relegation of the poetry to minimal importance isn’t entirely wrong. Much of Pound’s work—including almost all of the Cantos—simply are not worth reading or investing the time and resources of scholarship. Arguments about Pound’s politics often seem like ways to skirt the question of his literary merit. We know he’s important—but is he any good?

So let’s speak plainly. Pound was a central figure of twentieth-century literary history, without whom lasting, enduring works would not have taken the shapes they did. He was a talented, innovative poet—up until his mid-thirties. But the Cantos, on which he staked his reputation, were a failure. The modernist scholar Lawrence Rainey referred to them as “The Monument of Culture.” The truth is that they were born ruins. To find beauty in them, we have to do something like what Pound did in Cathay: read the word-by-word glosses and ignore the paraphrases. The reason is this: when we do try to make sense of them, they descend too often into secrecy, paranoia, and conspiracy. It’s not that there’s no “there” there—it’s that what is there far too often isn’t worthwhile.

Pound will endure, though, because in any honest literary history he must. The poems will, too—at least some of them, the early translations like Cathay especially. Billings’s scholarship makes the case for that—and for “The Seafarer,” “Homage to Sextus Propertius,” and the first Canto. Despite the ugliness of his person, some of what Pound created remains lastingly beautiful.