Succession and the Anarchy 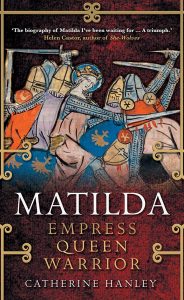 By none but me can the tale be told,
The butcher of Rouen, poor Berold.
(Lands are swayed by a King on a throne.)
’Twas a royal train put forth to sea,
Yet the tale can be told by none but me.
(The sea hath no King but God alone.)

On November 25, 1120 the White Ship left Barfleur in Normandy laden with three hundred passengers bound for England. Among their boisterous and drunken number were young Anglo-Norman nobles and members of the royal family. King Henry I wisely made other plans for crossing the Channel but allowed his sons William Adelin and Richard fitzRoy to board the White Ship. The water was calm, the night dark—there was no moonlight—and a smooth passage was expected. The captain, Thomas fitzStephen, obliged the young crowd and sped out of the harbor in an attempt to catch up to the rest of the fleet. It was a fatal mistake. An undetected rock punched a hole in the vessel’s port side, sending water gushing into the listing ship. A short time later, the White Ship slipped under the dark waves leaving passengers thrashing and screaming among the debris.

It may be a cruel twist of fate that the only survivor among the royal party was Berold, a lowly butcher, a fact that was not lost on Dante Gabriel Rossetti and inspired his long poem “The White Ship.” But the loss of King Henry’s two sons had far greater significance for his daughter Matilda and all of England. Succession—and the relative peace that accompanies it when it appears to be settled—was once more an open question. Norman nobles were a quarrelsome bunch and absent a strong ruler there was bound to be trouble.

Catherine Hanley recounts the ensuing conflict—inaptly labeled the Anarchy—with verve and clarity. Much of the book is rightly concerned with the roughly fifteen-year struggle for the English throne between Matilda and her cousin Stephen of Blois. But Hanley also squeezes as much as possible out of the extant sources on Matilda’s early life. The reader is amply rewarded. Hanley’s Matilda is the flesh-and-blood story of a young girl thrown into the treacherous world of medieval dynastic politics and her efforts to become both woman and queen. Neither, of course, were simple tasks in an age that viewed women mostly with limits, not possibilities.

According to Helen Castor, author of She-Wolves: The Women Who Ruled England Before Elizabeth (2011), “Matilda inherited her father’s commanding temperament, his ability to inspire loyalty, and his political intelligence—but the role she played and the qualities she possessed have been much obscured, then and now, by the preconceptions of the lords she sought to lead and the clerics who wrote her story.” Hanley wades through the charters and chronicles to give us as clear a picture as we are likely to get absent the discovery of new documentary and archaeological material. Her effort is preceded by the erudite Marjorie Chibnall, author of, among other scholarly works, The Empress Matilda: Queen Consort, Queen Mother, and Lady of the English (1991). Chibnall’s book is dense—her discussion of grants, charters, and the politics of medieval monastic patronage will leave most eyes bleary—but its virtue lies in her use of previously untranslated German scholarship. Hanley benefits greatly from her predecessor and, while not offering much that is new, gives the sources a fresh interpretation in a tighter—and far more engaging—narrative.

Matilda was born of the union between Henry I and Edith-Matilda. At the age of eight, she was promised in marriage to Emperor Henry V (Hanley kindly goes to lengths to keep the numerous Henrys, Matildas, and Stephens straight). On July 25, 1110 she was crowned Queen of the Germans. She claimed the Empress title despite never being coronated (she was crowned by an archbishop, not the pope). The Germans revered her, and referred to her as “die gute Mathilt” (the good Matilda). When her husband inherited land in Canosa, Italy, she was installed as regent and by all accounts acted wisely and judiciously. Emperor Henry V died in 1125, leaving Matilda widowed. Her father—rarely one to miss an opportunity—married her off to Geoffrey, Count of Anjou, and in so doing shored up his support on the continent.

It became increasingly likely that Matilda’s father Henry I would die without a son and heir. According to several chroniclers, the king declared that in the event of his death, his daughter Matilda would succeed him as sovereign. On two separate occasions King Henry presided over an oath-taking by nobles and churchmen from across the realm. Those gathered—including her cousin Stephen of Blois—swore to support Matilda as Henry’s successor. But after the king died in 1135, Stephen raced back to England and claimed the throne. So began the period described in one chronicle as when “Christ and His saints slept.”

Hanley guides the reader through Matilda and Stephen’s competing claims to the throne, explaining customs of primogeniture and porphyrogeniture and exploring the patterns and possibilities of medieval queenship. In Hanley’s view—despite her subject’s failure to gain the crown—Matilda stands as an archetype for later queens regnant (like Elizabeth I). Matilda’s war with Stephen and her desire to rule in her own right (not merely as consort to the king) stood in sharp contrast to the age, so much so that she was criticized for being haughty and manly in her ambitions.

But Matilda did not get off to a great start. She failed to make preparations before the death of her father and so allowed Stephen the opportunity to seize power. And she was slow to gather her supporters and offer organized resistance. But in 1139, she arrived in England with her half-brother Robert of Gloucester at the head of a small army. The ensuing chess match between Matilda and Stephen was a combination of sieges, small engagements, and the capturing and recapturing of castles. Hanley, to her credit, doesn’t turn a blind eye to the effect the war had on the rest of the kingdom. She writes well—though briefly—of the economic impact on common folk and the accompanying devastation of the land.

At the Battle of Lincoln in 1141, Matilda’s army (commanded by Robert of Gloucester) crushed King Stephen’s forces and captured him. The victory solidified Matilda’s gains, expanded her power base in the English countryside, and weakened Stephen’s support among the Norman nobility. It didn’t last. Months later, the King’s forces inflicted a devastating blow at Winchester (appropriately known as the Rout of Winchester). Robert of Gloucester, courageously defending her army’s retreat, was captured and imprisoned. In November, a prisoner swap was arranged. The King was exchanged for Matilda’s loyal half-brother and hostilities resumed.

The stalemate continued over the next twelve years, though the players changed. Matilda’s three most able commanders—Miles of Gloucester, Robert of Gloucester, and Brian FitzCount—all died and, in 1148, she returned to Normandy never to see England again. She knew she would not be queen and so focused her attention and efforts on her son, Henry II. He took the fight to England (and Stephen’s son Eustace) to secure his throne. In 1153, an agreement was finally reached at Wallingford, bringing peace to the kingdom. Stephen would remain on the throne until his death to be succeeded by his adopted heir, Henry. “Matilda,” Hanley says, “was written out of her own story.”

It is hard to disagree. Medieval chroniclers—even those not unfavorable to Matilda’s cause—were critical of her for acting in her own behalf while, as Hanley sharply observes, they praised another Matilda (of Boulogne) for acting well in behalf of her husband. And with the coronation of her son, Henry II, Matilda simply fades from view. “Medieval England,” Hanley argues, “countenanced the reign of several underage boys and at least one lunatic—to say nothing of various men who were alleged to have been murderers, rapists, or both—but never of a woman.” The kingdom would have to wait until 1553 and Mary I for a queen who ruled in her own right. Catherine Hanley’s accessible biography lifts Matilda from between the lines of recorded history to gives us a fascinating portrait of a woman who did not need to rule to be remembered.

Timothy D. Lusch is an attorney and writer. He has appeared in Chronicles, Catholic World Report, New Oxford Review, The Toronto Star, and many other publications.