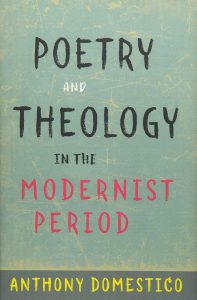 Literary modernism resembles the Ottoman Empire at the turn of the twentieth century: the sick old man of the English Department. Over the last twenty years, few specialties within the humanities have suffered sharper declines in faculty hiring. Students, as departmental staff gently remind me, don’t sign up for classes with “modernist” in the title. These facts feel somehow more ominous than a decline in enrollment in a course on Jane Austen or a dearth of faculty Shakespeareans. Literary modernism has been assumed to require the priests of the professoriate to bear arcane knowledge and pass this gnosis on to their protégés. Before the personality-driven rise of Theory, there was the personality-driven rise of modernism: Cleanth Brooks, Guy Davenport, and above all Hugh Kenner, whose ghost in many ways still presides over the field.

In Poetry and Theology in the Modernist Period, Anthony Domestico speaks directly to his colleagues. “[W]hat if we take a different tack?” he suggests, and break away from the role of the modernist scholar as “a decoder.” As he practices it, this means that the academic, rather than “telling us what religion really was about for the modernists” instead assumes (for example) “that, when Eliot talks about a theological term like the Incarnation, he really is talking about the Incarnation … that, in writing poetry about the Incarnation, Eliot is taking a serious theological idea seriously.”

This is the kind of suggestion that’s more likely to sound radical within the academy than outside its halls. Maybe that’s exactly what’s needed. Domestico, associate professor of literature at Purchase College, has never been bound in by an academic audience, writing reviews and conducting substantive, serious interviews with contemporary poets for Commonweal.

Rejecting an approach that would “see all modernist interest in religion as truly an interest in aesthetics,” he explores four theological questions through the dialogue created by three poets—T. S. Eliot, David Jones, and W. H. Auden: whether theology can speak across confessional borders; how ideas of revelation, grace, and eternity affect Christian poetic practice; how the nature of sacrament relates “to the broader project of human sign-making”; and how poetry explores the relationship between theology and history.

The last emerges in Auden’s poetry of the 1940s, after his religious return and as war raged across the globe. This might have made the moment ripe for apocalyptic thought, a focus on beginnings and ends—and, indeed, many were so drawn. But not Auden, the title of whose 1942 Christmas oratorio, “For the Time Being,” betrays his focus: the meantime, the interim in which we exist before the achievement of the City of God. This marks a turn, Domestico notes, from the ends-focused Marxist history that shaped his earlier political poems. Read alongside the works of Kierkegaard and Reinhold Niebuhr, it reveals the theological seriousness of Auden’s distinctive tone—wry, tentative, ironic, often smirking, deeply caring. The history of time for the time being is directed by irony as all three understood it: “not if one’s intentions somehow lead to unexpected, even opposite consequences, but if one’s intentions causally, through some initially unconscious but ultimately recoverable mechanism, lead to this unexpected conclusion.” Auden’s response to the irony of history is “laughter at the comedy of our existence,” the “necessary,” “joyful” precursor to Christian faith, prayer, love, and commitment.

That these two currents—a renewed Christian belief and World War II—shaped Auden’s poetry has also been taken up at length by Alan Jacobs in his The Year of Our Lord 1943 (2018). Domestico complements and extends Jacobs’s panoramic study of that year’s crisis of Christian humanism—forward, through David Jones’s exploration of sacrament and sacramental representation in The Anathemata (1952). And backward, through the work of T. S. Eliot as both poet and editor of the Criterion.

The periodical networks of modern poetry were also theological networks. Auden reviewed Kierkegaard and Niebuhr for the Nation and The New Republic; Eliot reviewed Jacques Maritain in the Times Literary Supplement; and Eliot’s journal, the Criterion, devoted its ever-expanding reviews section first to a theological debate between Augustinianism and Thomism, and then to a decade-long dialogue among various neo-Thomist approaches. “In the 1930s,” he concludes, “to be a reader of the Criterion, Britain’s most influential literary magazine, was also to be a reader of contemporary theology.”

The variety of neo-Thomist approaches that appeared in the Criterion helps to explain a seeming disjuncture within Eliot’s writing. It’s commonly said that Eliot the critic is a classicist and Eliot the poet is a romantic. Domestico observes in turn that Eliot the religious critic associated himself with French neo-Thomism, emphasizing nature’s perfection through grace, the potential for harmonious order between Creator and creation. As a religious poet, however, Eliot aligns more nearly with the theology of Karl Barth, emphasizing the painful gap between Creator and creation. A reader of the Criterion over the course of the 1930s would, Domestico writes, have been prepared to recognize the influence of Barth on “Burnt Norton” when it first appeared, describing “not a world charged with the grandeur of God, but a fallen world only occasionally and violently intersected by transcendence.” Eliot’s poetry, prose, and editorial work stand in dialogue, in the service of creating the tensions that produce theological thinking rather than advocating for a single, settled, theological position.

Poetry speaks through two, simultaneous grammars, one of English syntax and one of verse’s rhythms, sounds, and lineation. In doing so, it is able to afford both the experience of theological intellection and the experience of living out theology—of human practice, flourishing, and cost: Auden’s smile and Eliot’s pain. In their work, these two theological experiences overlap as the two grammars of poetry do. But Auden, Eliot, and Jones weren’t the first to engage theology through poetry in this way—to write poetry itself as a kind of theology. Regina Schwartz (to whose 2008 book, Sacramental Poetics, Domestico acknowledges a debt) observes a rather similar phenomenon in early modern English verse—in the works of the very poets whom Eliot stood at the center of his constantly-mutating tradition. And it is not simply that poets sometimes move, moths to the flame, nearer the divine: theologians, too, have practiced their craft in verse—the medieval Jewish rabbi Solomon Ibn Gabirol’s Keter Malkhut (The Kingly Crown) being only one example.

Read alongside each other, Domestico, Schwartz, and Jacobs let us see Eliot’s debt both to contemporary theology and to the Metaphysical poets for his model of a theologically serious poetry. Likewise, the debt of the most theologically serious poets of the past fifty years to Eliot, Auden, Jones, and others, goes beyond form and tone. Geoffrey Hill, Robert Hayden, Christian Wiman, and Jacqueline Osherow, writing from varied religious traditions, draw more than fragmentation, despair, and self-consciousness about their placement within the canon from their predecessors.

This is especially true of Hayden, once Auden’s student and among the most significant American poets of the twentieth century, though still overlooked—at least in the academy. Drawn to his early, historical poems and finding, in works like “Middle Passage,” a clash with Eliot’s historical vision, critics shy away from the deep engagement with Baha’i theology that courses through Hayden’s later writing. Yet his arguments with the elder poet are more than political and aesthetic. Baha’i responses to a Barthian poetics are, in a deep and abiding sense, part of a larger theological argument in English-language poetry—one that’s there to be read, quite near the surface, if only we let ourselves read it.

J. L. Wall teaches at the University of Michigan. His poetry is forthcoming in First Things and Atlanta Review and he is at work on a book about poetry, covenant, and American civil religion.