Tertullian and the Rise of Religious Freedom 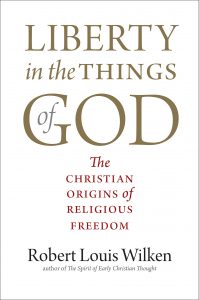 Like most conventional histories, this one contains a lot of truth. But it also contains many simplifications and distortions. In his helpful new book, Liberty in the Things of God: The Christian Origins of Religious Freedom, Robert Louis Wilken corrects the record. (Full disclosure: Professor Wilken presented a draft of Liberty in the Things of God in a colloquium our Center for Law and Religion sponsors at St. John’s University). Wilken is one of the greatest historians of Christianity living today, and in this short book, which he calls “an historical essay” rather than “a complete history,” he convincingly demonstrates why we should not understand the rise of religious freedom simply as a defeat of Christian ideas. The real story is more complicated.

Wilken argues that the concept of religious freedom, as it developed in the West, has a foundation in the writings of the Church Fathers, most notably Tertullian and, to a lesser extent, Lactantius. Tertullian, Wilken says, was “the first in the history of Western civilization to use the phrase ‘freedom of religion.’” Seventeenth-century figures like Locke relied on the patristic texts, sometimes without attribution, to argue for religious tolerance at the time of the Glorious Revolution. Later figures like Madison and Jefferson, in turn, relied on Locke, thus making patristic thought the unacknowledged idiom of the Enlightenment, at least with respect to religious freedom. Christians did not often live up to the ideal of religious freedom when they controlled the state, Wilken concedes. And Christian sources exist on both sides of the question—more of that in a bit. Yet “[a]ny account of the rise of religious freedom,” he writes, “must give a large place to the spiritual passion and intellectual energy of Christians.”

Tertullian, the second-century North African convert, most famous today for his observation about the blood of the martyrs being the seed of the church, is the hero of Wilken’s story. At a time of harsh, if sporadic, persecution, Tertullian argued that Rome should allow Christians to exercise their faith because religious freedom was an essential component of human nature. “It is only just and a privilege inherent in human nature,” he wrote in his Apology, “that every person should be able to worship according to his own convictions. For one person’s religion neither harms nor hurts another.” Sixteen centuries later, Jefferson would write something remarkably similar in Notes on the State of Virginia: “[I]t does me no injury for my neighbor to say that there are twenty gods, or no God.” Wilken notes that Jefferson had a copy of the Apology in his personal library, and marked the passage about religious freedom, though he does not think Tertullian influenced Jefferson’s phrase directly.

Tertullian derived his idea about religious freedom and human nature, Wilken maintains, not from pagan thought, which would have found it incomprehensible, but from a Christian understanding of the human person. God had created man in his image and given him the responsibility to choose whether to follow him or not. Each person must make the decision voluntarily for himself, and bear the consequences. Moreover, the Gospels made clear that, from the Christian perspective, people did not have a unitary identity as Roman citizens, but a “dual loyalty, to God and to the ruling authorities.” For Christians, unlike for pagans, state and religion were different; one’s duties to Caesar could not overcome one’s duties to God. The state had no right to interfere in the relationship between believers and Christ.

To be sure, Tertullian was not the only Christian writing in late antiquity, and other Church Fathers did not share his expansive view of religious freedom, especially once Christianity became Rome’s state religion. Augustine famously argued that the state should coerce Donatist heretics back into the Church, and did so on the basis of Scripture. In the parable of the wedding feast in the Gospel of Luke, when those invited prove unwilling to attend the celebration, the angry host instructs his servant to “‘[g]o out into the roads and lanes, and compel people to come in, so that my house may be filled.’” Augustine maintained that the state could likewise force people to worship in the correct church—for their own salvation. Augustine’s justification for state repression, Wilken concedes, which is unlike anything one finds in Tertullian, drew the support of prominent Christians for centuries.

Indeed, one could cite many Christians over time who have thought state coercion consistent with their faith. In the middle ages, Aquinas argued that civil government had the authority to put heretics to death—though not the non-baptized, like Jews and Muslims, who had never entered the Church. Heretics were traitors to the Church and a danger to Christian society; if thieves and forgers merited death, heretics did so even more. And John Calvin’s Geneva burned at the stake Michael Servetus, who denied the Trinity. Calvin vigorously defended this action, Wilken notes, by arguing that it was “the responsibility of magistrates to vindicate God’s honor.”

Yet Tertullian’s arguments were always there in the background, always available to those Christians who favored religious freedom. Wilken shows how Tertullian’s arguments appeared, refashioned and restated in varying ways, during the Reformation, in the writings of Catholics resisting Protestant rulers and of Protestants resisting Catholics—in short, in the writings of dissenters from prevailing orthodoxy. The Dutch Calvinists and English Nonconformists have a special place in his story. He has great praise for the Puritan Richard Owen and the Quaker William Penn, both of whom cited Tertullian, and especially for the seventeenth-century Baptist Thomas Helwys. By the late seventeenth century, Locke could synthesize these Christian arguments for religious freedom—again, without attribution—in a way historians have taken to be innovative. In fact, Wilken maintains, Locke was merely recapitulating a much older Christian tradition, though in a way that now seemed “reasonable without reference to [its] origins.”

Wilken writes lucidly and persuasively, and his basic point is correct. Religious freedom is not a concept foreign to Christian thought, and its place as a pillar of Western civilization owes much to Christian sources. Of course, one should not exaggerate. It’s fair to say that religious freedom, as it developed in the West, is one Christian approach to the question, but not the only Christian approach. As the examples of Augustine, Aquinas, and Calvin show, there are strains in the Christian tradition that would oppose religious freedom, at least as we understand the concept today. The dualist nature of Christian politics, which insists that Christians owe duties simultaneously to God and to the state, but that Christ is Lord of all, makes easy conclusions about the Christian approach to church-state relations impossible.

Nevertheless, the Christian origins of religious freedom, as that idea has come to capture the imagination of the West, are there for anyone to see. Wilken has provided a helpful service in reminding us of that fact. It’s time to set the conventional history firmly aside.

Mark L. Movsesian is a professor of contract law and director of the Center for Law and Religion at St. John’s University School of Law.