The British Are Coming 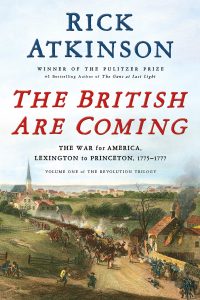 Epic conflicts that punctuate American history have profoundly shaped it. The Civil War marked an inflection point for the nineteenth-century United States. World War II, a larger global struggle, had a similar role in the twentieth century by reviving America’s economy and morale after the Great Depression and then establishing the country as a victorious superpower. Current interest in the eighteenth-century struggle that won independence should be no surprise, as the American Revolution was the most defining conflict of them all.

Rick Atkinson, who won the Pulitzer Prize for history in 2003 for The Guns at Last Light, turns his attention to the American Revolution in The British Are Coming: The War for America, Lexington to Princeton, 1775–1777, the opening volume to a new trilogy. As he notes, a larger portion of Americans perished in the revolution than any conflict save the Civil War. No prior colonial rebellion had succeeded, though the Dutch Republic had won independence from Spain after a long struggle. Britain, it might be added, engaged in an unprecedented projection of power overseas by sustaining a war across the Atlantic for more than three thousand days with only sailing ships and horsepower. A struggle that established the United States as an independent republic also reduced Britain’s empire by a third and changed the trajectory of its development. Such momentous consequences makes understanding why the American Revolution occurred and the course it took all the more important.

The British Are Coming, like the best popular history, engages its theme by focusing on storytelling and characters. Atkinson opens with a striking vignette of George III visiting Portsmouth for a fleet review that underlines America’s place in a wider British Atlantic World. It also shows the king’s combination of diligence and duty in upholding what he perceived to be a national interest, which required bringing the colonies to accept Parliament’s supremacy and pay the taxes it voted. Those virtues became a tragic flaw by making George III inflexible at a moment that demanded a more creative response than simple perseverance.

Benjamin Franklin, the great polymath who had left Philadelphia, where had made his name and fortune, for London, had long championed Anglo-American union even as he grew exasperated with official disdain. He had sparked a controversy in 1772 by sharing with patriot leaders in Boston private letters by Massachusetts Governor Thomas Hutchinson on measures to handle unrest there. Vilified by the London press when he admitted to the act, Franklin faced a public humiliation when Solicitor General Alexander Wedderburn scathingly attacked him before the Privy Council in a public hearing on a petition from America. Days later the government dismissed him as postmaster general for the colonies. While he continued efforts at reconciliation for a few months more, a loyal subject turned into a patriot leader second only in importance to George Washington.

The war began when tensions in New England escalated into an open clash at Lexington on April 19, 1775. British efforts to exact recompense for tea destroyed at Boston and to impose royal authority brought fierce resistance. Thomas Gage, who combined civil authority as Massachusetts governor with command of the British army in America, lost control as patriots swept royal officials aside, with committees taking their place. His move to seize military stores that aimed to break momentum by calling the patriots’ bluff instead mobilized New England and drew support from more distant colonies. If not heard around the world immediately, shots fired quickly echoed throughout America. Atkinson captures the moment in quoting a New Yorker who wrote “there is no such thing as being a looker on.”

A British reinforcement with generals who later had pivotal roles in the war reached Boston in May to find Gage’s army besieged. The fight at Lexington revealed weaknesses behind the façade of British power seen again at Bunker Hill a few months later. Although troops led by General William Howe defeated their opponents, they suffered heavy casualties and commanders made tactical missteps. Gage, soon replaced by Howe, lacked either manpower or initiative to take the offensive beyond coastal raids like the burning of Falmouth, Maine that further antagonized colonists and drove opinion toward severing ties with Britain. Positions hardened. George III declared the colonies in rebellion on August 23, but the struggle by then had become a civil war he and his ministers seemed to be losing. Both sides grappled with uncertainty that summer. Washington, appointed by Congress to command its new Continental Army, described himself as “embarked on a wide ocean, boundless in its prospect.”

Recounting a story every American schoolchild once knew by heart poses challenges that Atkinson meets by evoking the immediacy of events and individual perspectives. He also brings the British clearly into view as protagonists with intentions of their own rather than mere foils to the eventually triumphant colonists. Many in Britain supported the American cause, as Atkinson shows, while large numbers of colonists remained loyal. Newspapers and Parliament aired their government’s management of a controversial war before the public without censorship or restraint. Both public and Parliament backed the conflict just as they had earlier supported coercion. Despite vocal critics like Edmund Burke, king and ministers stood as firm in their resolve as the Congress in Philadelphia. Blows, as George III had told his prime minister Lord North, must decide matters.

Atkinson draws heavily on the king’s papers, held in the Royal Archives at Windsor Castle, to reveal how George III and the government saw the situation. His efforts benefit from the recent Georgian Papers Program to digitize the collection with an updated catalog and make it more accessible. Immersed in detail, the king supported what he believed was the great national cause of restoring authority over the colonies. Lord George Germain took over the American Department in late 1775 to direct that effort with necessary vigor. He oversaw planning for the next year’s campaign to give Howe and other commanders the means to end colonial resistance.

The American cause flourished over the months after Bunker Hill despite Washington’s shortage of vital gunpowder and difficulty forming militia into soldiers. Capturing Ticonderoga opened the way for an invasion that nearly made Canada the fourteenth colony defying Britain. One army crossed Lake Champlain to capture Montreal while a smaller force under Benedict Arnold crossed the Maine wilderness to the St. Lawrence and joined the siege of Quebec. Cannon from Ticonderoga enabled Washington to drive Howe from Boston after the new year. Patriots checked loyalist risings in North Carolina and Virginia. A British attack on Charleston failed with heavy losses. The Declaration of Independence on July 4 rallied patriot enthusiasm while staking a position from which it would be hard to retreat.

Howe’s move on New York changed the dynamic. Looking like a city afloat, the expedition comprised the largest force Britain had sent overseas. Sustaining it during the ensuing campaign put a tremendous burden on the Royal Navy. Before the campaign began, however, Howe’s brother Richard—who combined the roles of naval commander and peace commissioner—met Franklin, John Adams, and Edward Rutledge in hopes of opening negotiation. The distance between their positions, however, left nothing “but to fight it out,” as Howe’s secretary observed. Sweeping British victories nearly trapped Washington’s army while another force had recovered Canada, driving Americans back across Lake Champlain. Howe crossed the Hudson after taking New York to drive Washington through New Jersey. Only the lack of boats or bridging equipment held back an advance on Philadelphia. The end to resistance seemed in sight.

Washington’s gamble of a counterattack over the Delaware broke the momentum Howe had built since September. Victory at Princeton exposed British vulnerabilities while forcing them into a different kind of war that played to American strengths. Repeated missed opportunities by Howe to strike a decisive blow during the autumn came into sharper focus. Those chances would never come again as Washington learned never to fight without an avenue for retreat. Having failed to end the struggle in a single campaign, as Germain had hoped when he took over directing it from London, Britain faced a more difficult war than its leaders anticipated.

That story and other chapters of the American Revolution awaits Atkinson’s next two volumes. He closes this first volume with independence proclaimed but not yet won. Princeton and subsequent fighting in New Jersey thwarted British hopes and forced hard choices. Persistence on both sides coupled with foreign intervention made the Revolution a war of attrition with global reach. It will be interesting to see how Atkinson depicts that larger struggle.

William Anthony Hay is the 2019–2020 James Madison Program Garwood Visiting Fellow and a Professor of History at Mississippi State University.