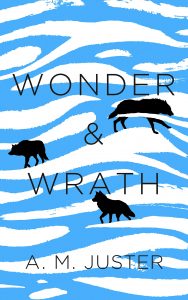 It is difficult to imagine a more upstanding literary citizen than A. M. Juster. His work as an editor, lately of First Things and now at Plough, has been first-rate. He has taught poetry both in and outside the academy. As a translator, he seeks to broaden the body of work in English, saying in an interview that he tries to find “really interesting writers who have slipped outside the canon, or writers who need to be brought in for the first time.” This project has included the Satires of Horace, Saint Aldhelm’s Riddles, and most recently John Milton’s Latin Elegies. And this while not publishing an original collection of serious verse in nearly twenty years. He has set his own work aside in service to the broader literary world. All this to say that this year, having published a new collection, Wonder and Wrath, we would do well to pay attention.

As we might expect, Wonder and Wrath includes an ample selection of translations. These range from versions from the Chinese, to Welsh, to fragments of Rilke’s French, which Juster has, provocatively, “completed.” Juster seems to have a special affinity for Latin poems composed by English poets and has included two of them in this collection, both valuable additions to the canon for those of us who do not read Latin. “To my dear friend, M. J. Jackson, disparager of this treatise,” by A. E. Housman, is thought to be the last Latin poem by a major English poet and is significant for that reason. Typically, Housmanian, it adds little to his extant body of work—it is one more poem about death and unrequited homosexual love.

Come now, accept: that day we join the dead is coming
Which gives the dirt our bones as they decay,
With spirits not destined to live eternally
And bonds between dear friends that fade away.

Juster imitates Housman’s English quite well and retains the Latin metrics insofar as they can be carried over into English.

More significant to the collection is Juster’s translation of Christopher Marlowe’s one extant Latin poem. It is a straightforward elegy on the death of a magistrate (who, not incidentally, had recently dropped murder charges against Marlowe.)

rejoice, you sons of crime
mourn, guiltless one, neck bowed with tangled hair;
the court’s bright light, the pride of precedent
has died. Alas, great virtue has fled with him.

This again appears to be a fairly strict translation. Juster handles these poems very carefully. He has to because he understands the danger of poetry. Much as it is touted as a “truth-telling medium,” Marlowe’s poem, in gingering up the language to laud a corrupt judge, shows us poetry’s power to lie. So Juster handles it almost as if it were a piece of evidence, which he seeks to turn over with as little corruption as possible.

Wonder and Wrath includes several original elegies, which Juster handles with the same care. One poem, “No,” is a kind of anti-elegy in which he refuses to give into language that comes ready-to-hand when someone dies.

When you compose
a line, it is a message, not just art.
Be furious with me, but I refuse
to praise him. No, we have too much to lose.

At stake is not just the speaker’s personal integrity, but the integrity of the language. It is the poet’s first job to keep language up-to-date so that we have words that still mean something. A cliché is a calcified metaphor, a stock phrase that the brain ceases to register. It becomes more background noise. Where Marlowe has rattled off a string of tired phrases, Juster offers something new.

This concern for the integrity of language runs through the entire collection—so much so that Wonder and Wrath can be read as a statement on the nature of the “public poetry.” Consider “Sudden Onset,” a brief poem about a cancer diagnosis.

They stay upbeat, then say
“what doesn’t kill you makes you stronger”—
that classic Nietzschean cliché.

We’ll know before much longer.

The problem is it’s true
for hate and tumors too.

Dana Gioia contends that “the poet knows that by articulating a wish, by giving it tangible form, [he] can potentially awaken the forces of imagination and desire that animate the future.” If this is true, then it works in the negative, and thus this kindly meant cliché has inadvertently cursed the patient. We see this principle more explicitly in “Vertigo,” another poem in which doctors try to console with a canned phrase. But in this poem, the potency of words is contrasted with the impotence of medical science.

No whiz-bang device can repair
your inner ear;

Later in the poem, we see another unwitting curse. “Focus your eyes on horizons,” says one of these “sad wizards.” This is meant literally, of course, but in the logic of the poem, it also takes on its clichéd metaphorical sense. “It helps to refocus the brain; / the brain resets.” To which the patient replies:

[My] brain can reset in the ways
my father’s did.

When his tumor nicked a vein,
cells drowned in blood.

Softer than an old potato
too moldy to mash.

More user-friendly than a hooker
hard-up for cash.

Love is like a hard-time sentence—
but better than cancer.

Ask not what your country can do,
for fear of the answer.

And so forth. It has been often observed that rhyming verse is more easily memorized. One can almost not help memorizing these simple lines. Juster has shown us how the curse works. He, like a shaman, has told us something we will never forget. Don Paterson observes that poetry, more so than its sister arts, has “retained a unique and near-magical property. It remains the one art form where its memory and its acquisition are one and the same thing.”

At this point it is worth noticing Juster’s preoccupation with unmistakably oral, or public forms of poetry—his interest in St. Aldhelm’s riddles, for instance. The riddle, it so happens, is one of the forms Paterson identifies as having “magical” qualities that are especially evident. Juster is also fond of the sonnet, a form established by long precedent and so he does not tinker with it, as modern poets are wont to do. When he begins a sonnet, he is aware that he is engaged in a contract with his reader, who will have specific expectations that Juster is careful to satisfy. He also attempts to resurrect the alliterative verse of Anglo-Saxon. This, of course, calls to mind the archetypal bard-figure. Many modern poets have tried alliterative verse but it will never become a natural form again. It is only ever a gesture, which Juster uses to best effect in “After Scattering David Berman’s Ashes.” It is a list of epithets as one might expect in a passage of Beowulf. Berman is described as

Reconciler of rhythm and rules
defender of faith doubter of God

Friend and counselor a force in court
champion of clarity classics and charity.

Several times in this poem (and this collection), poetry and legislation are wedded together. We tend to think of these categories of language as almost mutually exclusive, but in pre-literate times it was the poet who was charged with memorizing the code of law. The question Wonder and Wrath seems to pose is: what role does the poet play in civic life? Since the Romantic age, the poet has been seen as an outsider, the solitary genius over against the body politic. There is also the banal political poetry of the mid-twentieth century, which is better understood as protest poetry. That is, the individual poet set against the state. Juster’s work explores how we can make meaning through public institutions, especially that most public of institutions, our shared language.

Dan Rattelle is an MFA student at the University of St Andrews. He is an editor of Trinity House Review, and his first book of poems, The Commonwealth, comes out October 2020.