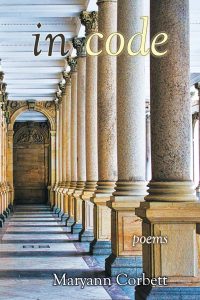 Maryann Corbett spent thirty-five years working for the Minnesota Legislature in the Office of the Revisor of Statutes. Here is how she describes the straitjacket of legalese her writing had to wear all those years:

Ours is a stunted tongue,
mostly unmouthed, rarely licked into life.

In it, one may not exclaim,
wonder, or boast …
… Laughter
is illicit, poetry impossible.

No wonder she has experienced such an outburst of creativity since leaving that position. In the last dozen years, Corbett has authored five books of poetry, one of which, Mid Evil, received the Richard Wilbur Award in 2014. The lines just quoted are taken from the title poem of her most recent collection, In Code, which includes several poems that look back on the time when she spent her days writing “the indexes for case and statute books.”

“An Aisle of Japanese Tree Lilacs” celebrates the poet’s last “free” moment, early in the morning, before entering the building where she works, an experience which ought to make her bosses envy her: “The great, with the bespoked, ramp-covered parking spots … miss this last sweet: white-petalled, fragrant rain.” The experience is in fact available to “all comers”: “the stony-faced in pinstripes,” the “closet rocker,” the “gambler on a winning streak …” It is the “clandestine poet,” however, who commits it to memory and, these many years later, commits it to the page in verse.

What a wonderfully accurate self-image, the clandestine poet! The principal job of the Office of the Revisor of Statutes is the compilation of the state’s official statutory code. Creating that code goes hand in hand with keeping quiet about political subjects; one could lose the job for being considered a partisan of any kind. The poet had to pose as tight-lipped civil servant; anything she said about public affairs for all those years had to be veiled, or “in code.”

There is another reason that a poet in her situation might consider herself a “clandestine” figure. Not only must she keep her political opinions to herself, but she is forced to speak a language other than her own. Poetry is impossible “in code.” In a poem titled “Fearful for my government job, dreaming of retirement, I think of Du Fu,” she addresses the great Chinese poet of the Tang Dynasty who was, like herself, a civil servant:

Teach me how you mastered yourself
to leave us poems worth these thousand years
of rivers, moonlight, compassion.

Tell me how you knew it was time at last
to flee the barbarians.

Yet, for all the nervous discomfort and repression associated with her work in the government office, the poet experiences mixed feelings upon leaving the job. In a beautiful sonnet written after her retirement, she compares the experience to

an older loss: when her last child
had learned to sleep till daylight, and her lulled
limbs fled communion with the monk, the night-
watcher, the graveyard shift, as she became
an outcast from the world of two a.m.

“Yet there was good there,” Dante said of the Inferno. Corbett did manage to bring something of great value back from the world of fluorescent lighting. In her meditation on a buckram volume of court cases, “A Volume of Cases,” we feel the weight of those lost days and years when she must have felt as stifled as Kafka in his insurance office. But Corbett shares something else with Kafka. The circumscribed condition in which she worked to make a living gave her a window through which she sees clearly the human condition, the way most people live today.

The home foreclosed. The groaning debt.
The liabilities offset.
The punch thrown in the bar. The threat.

It might seem counterintuitive that Corbett should choose to write formalist poetry upon being released from the her cubicle, forcing herself to fit her poems inside those little boxes, but you’d be mistaken to think of poetic form as any kind of restriction on this poet’s expressive art. Corbett’s formal mastery makes her something akin to a magician. One must think of form in relation to her poetry not as boxes of different sizes but as zinnias, lilies, and roses; window frost on a Minnesota nights; fireworks!

To read In Code is to experience something very like a fireworks display of different forms, both traditional and newly invented, all intricate and masterfully accomplished. Corbett uses form not as decoration but in service of her subject. Her beautiful poem, “Fugue in October,” weaves together two disparate scenes, that inside the church of St. Paul, where Monteverdi’s baroque composition is performed, and that in a homeless encampment outside the church. In “The Nutshell Studies of Unexplained Death,” writing about the maniacal detail of Frances Glessner Lee’s miniature crime scene dioramas created as teaching tools, Corbett pairs her subject with its appropriate form: the poem is written in rhymed haiku stanzas.

Her poem “The Forgery” is a formal poem that takes a non-literary form: it does not adhere to the rules of classical prosody but takes the form of a questionnaire. The poem stands out for its Catholic ethos, the subtlety of the poet’s self-examination, the hint of the kind of “sin” a school girl might choose to confess, and finally, the admission that the speaker of the poem has entered the painting in question: “you stepped, years ago, into its frame and can never return.” For this poet, there is no escaping the Catholic ethos that has shaped her imagination.

“Resolve,” also takes a non-literary form to powerful effect. Corbett uses the resolution—the formal statement of a decision such as a mayor might deliver to an assembly—to state in no uncertain terms the moral revulsion a dutiful civic servant feels as she writes a commendation for a bomber pilot who strafed the people of Vietnam. Clearly, the once clandestine poet has come out of hiding.

Never content with “filling out a form” (she’s probably done quite enough of that kind of work), Corbett’s ceaseless formal invention works hand in hand with her moral imagination. It would be hard not to read “Massacre of Children in Peru Might Have Been a Sacrifice to Stop Bad Weather,” as a kind of prophecy regarding climate change; read that way, its message has a visceral impact, as do so many other poems in this collection.

Geoffrey Brock has called Maryann Corbett “one of the best-kept secrets of Amercan poetry.” With the publication of this outstanding collection, it will be impossible to keep the secret any longer.

Alfred Nicol’s most recent publication is the chapbook Brief Accident of Light: Poems of Newburyport (Kelsay Books, 2019) a collaboration with poet Rhina Espaillat. Nicol’s full-length poetry collection, Animal Psalms, was published in 2016 by Able Muse Press. He has published two other books of poetry, Elegy for Everyone (2010), and Winter Light, which received the 2004 Richard Wilbur Award. Nicol’s poem “Addendum” was included in the 2018 edition of The Best American Poetry.