The Doctor as Amoralist 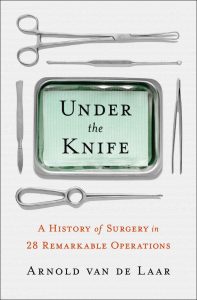 In his entertaining and readable review of the history of surgery, Arnold van de Laar, a Dutch surgeon, focuses on the development of technique and technology, both as responses to the problems presented by disease and dysfunction, and to the increase in insight and knowledge into the body’s function and the pathology of disease. The book, representing a reworking of a series of essays published in a Dutch surgical journal, is enjoyable and informative (although not for those upset by the graphic description of human fleshiness and bodily corruption), but what makes the book notable is what it stands for in the history of the philosophy of science—a work that is necessarily more descriptive than meditative because it relies upon the unexamined assumption that prior thinking can be rejected out-of-hand as founded only in an irrational and uninformed worldview.

It is, of course, a truism that surgeons (“chirurgeons,” a title deriving from the Greek for “work by hand”) look upon humanity in ways different from how the person is seen by the practitioners of internal medicine, and at least until the eighteenth century physicians and surgeons were considered to occupy different guilds. Dr. van de Laar rehearses this point by making the distinction that physicians “cure” and surgeons “heal,” but having noted the distinction he proceeds to describe surgical developments in ways that at best leave unsaid the humanistic considerations of the human person that have until recently been emphasized as a common inheritance of the practice of medicine. The history of surgery as set forth in this book is more a history of technological understanding and development than a history of insights gained into the human condition through interventions “by hand.”

In the introduction, the author relates the story of the French military surgeon Ambroise Paré having to improvise on a battlefield in 1537, and of how this improvisation (which did not follow traditional teaching on the treatment of certain wounds) resulted in better results. From this story van de Laar’s thesis emerges: the combination of deductive reasoning and inductive learning must be combined in diagnosis and treatment in order for the medical practitioner to gain insight into the pathogenesis and pathology of the disease state presenting in the patient, and in order to effect a change for the better. Van de Laar entertains with numerous example of what problem presents in a given patient (with examples ranging from John F. Kennedy and Louis XIV to the humble), and how this problem must be first understood and managed before it can be eliminated or diminished. In his examples the author makes it clear that it was only because a brave surgeon was prepared to reject prior teaching that progress could follow.

Fair enough, but the author gives too short a shrift to the learning that is rejected. No rational person can legitimately question whether Aristotle, for example, was wrong in his scientific thinking. But to reject Aristotle’s Physics does not require rejection of his metaphysics. Modern thinkers certainly have, even if what used to be called “formal” or “final” causation have crept back into the thinking of those who argue for such things as “selfish genes.” The mind/body dualism of thinking after René Descartes, and the definition of knowledge as that which is useful for the control of nature, as described by Francis Bacon (what we would now call technology) are assumed, rather than discussed, in a book like Under the Knife. The premises of learning and progress are defined in technological terms and in terms of how greater control of particular body phenomena has been developed. In short, a patient begins to look like a collection of systems rather than like a person.

There is a long tradition of medical writing that includes meditations upon the human state, and its mortality. Even as recently as the 1980s one could encounter well-received and publicized works by a pathologist (F. Gonzalez-Crussi, Notes of an Anatomist and Three Forms of Sudden Death) in which his purpose in describing disease was to illustrate what it means to be human, and the tradition of the humanistic physician in fiction is well-known (e.g. in Robertson Davies’s The Cunning Man). These works of nonfiction and fiction alike have charmed readers. Van de Laar does not charm; he informs. He informs well, and thoroughly, and usefully, but he does not charm. Is this “progress” in medical literature itself a rejection of old learning, and is it a rejection that is done without specifically engaging what might (must?) be kept from old learning?

Arnold van de Laar is obviously a knowledgeable and gifted surgeon. His writing is incisive in ways that reflect a surgical mindset. His book is entertaining while being useful. His book is, however, an example of a way of thinking quite popular in our day and age—one that assumes that because we have made progress in what we can do we need not examine the reasoning of those who came before us. Because they could do less, their thinking may be dismissed as at best unenlightened. But not all knowledge that has not been inductively established following the scientific method can be reduced to a mere placebo effect. To do so is to restrict what knowledge is and to reduce the patient to a problem to be solved.

The Rev. Dr. Karl C. Schaffenburg is an Episcopal priest serving in Wisconsin, having previously worked in the pharmaceutical industry in Germany.