The Doctor as Moralist 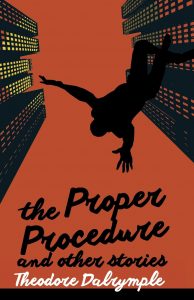 The phenomenon of the literary doctor presents an interesting case in reading biography into a literary oeuvre. They seem to understand our temptation to read their personal experiences into the work and tend to play on those expectations in interesting ways. The poet William Carlos Williams gave his own attention to the mundane details of life an extra heft and interesting nuance by making readers aware of his vast experience practicing family medicine. The two identities, doctor and poet, were fused. As Williams explained, “they are two parts of a whole, that it is not two jobs at all, that one rests the man when the other fatigues him.” By all accounts, Chekhov felt the same way. Doctors, patients, and various maladies are weaved into his fiction. When poor health forced him to give up his medical practice in 1897 he considered it a profound loss.

It shouldn’t come as a surprise that Theodore Dalrymple, the pen name of British writer and psychiatrist Anthony Daniels, is a similar case. One could even say that a certain amount of his moral gravitas as an essayist concerned with political and social decay comes directly from his experience working in prisons. With a new collection of short stories, The Proper Procedure, from New English Review Press, it’s interesting to see just how those personal experiences, so obvious in his essays, play off against the fictive drive.

Daniels’s biography, pieced together from the dust jackets, sounds as prolific as his publication history. It’s worth quoting from the back of The Proper Procedure at length:

… a former prison doctor and psychiatrist. He has been arrested as a spy in Gabon, been sought by the South African police for violating apartheid, visited the site of a civilian massacre by the government of Liberia, concealed his status as a writer for fear of execution in Equatorial Guinea, infiltrated the English communist group in order to attend the World Youth Festival in North Korea, performed Shakespeare in Afghanistan, smuggled banned books to dissidents in Romania, been arrested and struck with truncheons for photographing anti-government demonstrations in Albania, and crossed both Africa and South America using only public transportation.

For as frequently as he draws on his experiences as a source of verifiable common sense in his writing as Theodore Dalrymple, a reader would not ever really find the full color of these various experiences. Dalrymple is taciturn. The nature of that taciturnity requires his only using the parts of his experiences pertinent to the subject at hand. That sounds like an obvious thing for a writer to do until one reflects on the number of first-person essays dressed up in analytical clothing. So many people extrapolate the world from their own self-image. Not Dalrymple.

Dalrymple is a wonderful moral essayist, perhaps one of the greatest writing in Britain right now, and in the same league as Peter Hitchens. For as prodigious and well-read as he is, his thinking orbits the same handful of concerns, which he brushes over in his essays with the same relentlessness as one thumbs a worry stone. Perhaps his greatest subject is the ways in which we trick ourselves, or outthink ourselves, into being immoral.

One of his strongest nonfiction works, Admirable Evasions: How Psychology Undermines Morality, is about just this. In it, Dalrymple writes, “Psychoanalysis, as well as death, becomes a bourn from which no traveler returns: and like anything indulged in for a long time, concern over the small change of life becomes a habit, and an irritating one, that inhibits interest and taking part in the wider world. It is a poor center of a man’s attention, himself; compared with psychoanalysis, haruspicy or hepatoscopy (divination by entrails or the liver of sacrificed animals) is harmless to the character, for though it is absurd, it at least is limited in time.” He then goes on to dismantle psychoanalysis, behaviorism, and the more cartoonish forms of neuropsychological reductionism while all the while emphasizing our personal power and responsible to choose right over wrong. This is Dalrymple’s specialty, dismantling the fictions we construct in order to excuse ourselves from leading immoral lives, and also how society often builds institutions which take these fictions as their animating logic.

Naturally, these themes carry over into Dalrymple’s own short stories. Most of those collected in The Proper Procedure are about the tragic fates of the victims of societal decay. Not au courant political victims, but those who are truly forgotten and disempowered. Most of the protagonists are elderly and of modest means. And most of the stories are told, if not from, then at least from within their points of view, which serves to underscore the horror of the bureaucratic settings in which the stories typically play out. One is tempted to use the over-worn phrase “Kafkaesque,” but that wouldn’t be quite right. Kafka wrote cosmic parables that freeze our souls in anticipation of transcendent redemption. These are morality tales with clearly delineated purposes.

In “Bildungsroman,” a bitter and aging German immigrant woman named Miss Falkenhagen is handed off to a psychiatrist when she complains of stomach pains. The psychiatrist, an affable and suave albeit shallow and placating young man, suggests that Miss Falkenhagen record the memories of her remarkable life. “‘Writing your memories will do you more good than anything I can give you’,” he tells her. Excited by the idea, she returns home with rather grand expectations of how her memoirs will be published and received. She has trouble getting started, which compounds when it becomes obvious to her that her doctor is glib and uninterested in her story as anything really other than a therapeutic tool. He eventually learns secondhand that Miss Falkenhagen dies in her bed from pneumonia; “‘The funny thing was that she didn’t call anyone for help.’” The message here being of course that human flourishing requires real connections, with the heft of authentic community, and not the pared down and almost pornographic minimalism of social housing and bureaucratic medical care.

The titular story is perhaps the strongest. In it, an impoverished and elderly Miss Bud is whisked away by first responders for harboring vague yet paranoid suspicions about her neighbors. She brings a couple thousand pounds with her on her person to the hospital which, for odd but highly believable reasons, has to be confiscated and locked in the hospital safe. When she’s unceremoniously released from the hospital a few days later, the “office is closed” and she’s told that she’ll have to return later to get her money back. This all descends into a bureaucratic nightmare, perhaps more alien to Americans than to the British, but completely recognizable to a United States Army veteran like myself. After what must be months of dealing with annoyed receptionists and an obsequious and ominously titled “Administrator,” Miss Bud is given a paper check representing her cash “less fifteen Pounds administration fee.” The story ends with her collapse in the street, check fluttering out of her hand and into the wind as someone cries to get her quickly to a hospital.

It would be easy to fool oneself into thinking that this is subpar fiction. The prose is competent, but we’re never really quite surprised with the path of the story. Each is weighted down with intention, and none seem to have a unique life of their own. None live off of the page, so to speak. The obvious rebuttal would be that the moral value of these tales outweighs aesthetic considerations. And that might be true. But I think there’s a more interesting case to made as to the value of Dalrymple’s short fiction. There’s a formal achievement which should be recognized in these stories as well.

One wouldn’t expect Dalrymple to be mentioned alongside the Marxist mystic Walter Benjamin, but I believe that Benjamin’s essay “The Storyteller” can help us to better understand the value of Dalrymple’s book. In the essay, Benjamin writes that “The storyteller takes what he tells from experience—his own or that reported by others. And he in turn makes it the experience of those who are listening to his tale. The novelist has isolated himself. The birthplace of the novel is the solitary individual, who is no longer able to express himself by giving examples of his most important concerns, is himself uncounseled, and cannot counsel others.”

Which of course takes us back to Dalrymple’s experiences as a doctor and how he uses them. He’s a storyteller, and so his fictions brush up against the hard edge of a lived reality, striking a still pose halfway between fairy tale and morality play. They orient us towards something fundamental that Dalrymple has experienced in his own life. They create communion, then, in a shared core element of human life.

Dalrymple’s nonfiction essays and books are, in the end, perhaps stronger than his short stories, but to focus too much on that discrepancy would be to miss the chance at gratitude for another fine example of writing from an author, thinker, and person too often overlooked by the culture he so astutely diagnoses.