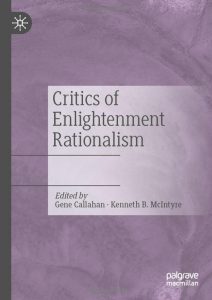 Surveying the French Revolution, Edmund Burke presented an apparent paradox: “The pretended rights of these theorists are all extremes: and in proportion as they are metaphysically true, they are morally and politically false.”

Burke’s critique of the French Revolution is well-known and is dealt with in the first of nineteen essays in this admirable volume. In his Reflections on the Revolution in France (1790), Burke argued that logical processes of abstract validity, failed to provide an infallible blueprint when applied to the realities of political life. Sources of authority must be looked for elsewhere than those immediately obvious to Enlightenment philosophes.

Callahan and McIntrye have offered us a series of critiques of Enlightenment rationalism, featuring a diverse range of thinkers, such as Kierkegaard, Tocqueville, Nietzsche, Polanyi, Heidegger, Gadamer, and Voegelin. The title of the book provokes the question: who is included under that designation? In recent decades Jonathan Israel has sought to inform us of a Spinozistic “radical” Enlightenment, as against a Cartesian “moderate” Enlightenment; yet his typology has so far failed to convince. By contrast, the expansion of the concept of Enlightenment by scholars such as J. G. A Pocock and Brian Young to include the “clerical” Enlightenment of Hanoverian England has considerably broadened our understanding of both the period and the concept.

This volume identifies the exponents of Enlightenment rationalism largely as the luminaries of the Parisian Enlightenment—Voltaire, Diderot, d’Alembert—and such fellow travellers as Thomas Paine and Thomas Jefferson. The ease with which such names are yoked together with Immanuel Kant leaves the reader feeling that too great a load is bearing the weight of this description. However, habits of thought characteristic of such Enlightenment rationalism are well-known, and the somewhat heterogenous cast have plenty of space to critique from every direction.

The tendency to seek for a single source of authority is the subject of those essays focussing on Isaiah Berlin and Michael Oakeshott. Berlin’s repudiation of the triptych of monism is rehearsed: the assumption that for all questions there is a single answer, that there is an identifiable mechanism for discovering this answer, and that all answers are compatible with each other. Berlin found this approach characteristic of the phenomenalism of his contemporaries, the logical positivists, and believed this to be simply another recurrence of rationalist assumption which has repeatedly played itself out through history. His own emphasis on value pluralism, on the incompatibility of unrelated goods, can be seen as a rejection of this rationalist juggernaut.

For Oakeshott, the rationalist errs in assuming that the mind is an abstracted and independent tool, which can be applied at will to whatever material one wishes. Instead, Oakeshott argues, the mind is formed through interaction with the world, and undergoes an apprenticeship to a particular tradition of behavior through this interaction. It is a category mistake to abstract a particular idiom of conduct, such as the scientific method, and assume that same idiom holds equal value as an application to other spheres of life, such as politics or aesthetics.

The tendency to apply the scientific method to otherwise unconnected spheres of life is what we typically mean by “scientism.” This tendency toward scientism is the theme of several of the essays in this volume, and is treated best in those essays on Polanyi and Heidegger. The reduction of our categories of the world merely to what can be measured, counted, or quantified, narrows our understanding. For Heidegger, truth is aletheia, “un-concealing,” and science is merely one mechanism for the world to disclose itself. By restricting our encounter with the world to the purely scientistic, or technological, we conceal from ourselves a more authentic encounter with it. This is the theme of the essay on Polanyi. He presents a dualism for which the Enlightenment is responsible. By making fact the province of the scientific method, the fact/value distinction demarcates objective knowledge to the realm of facts, reducing the world of values to the purely subjective.

This collection features a broad range of thinkers, all of whom critique Enlightenment rationalism from difference perspectives. While some essays cluster round particular themes, there is a certain disunity in the presentation. The essay on Hayek stands out however, as a bridge between several of the themes of this book. His own critique of scientism is well-made, with particular reference to the two books he published in middle-life; The Counter-Revolution of Science, and The Sensory Order. Hayek denies the mind the ability to reduce the objects of sensory perception down to the level of purely objective categories, as our typology and means of stratifying experience come from modes of thought and experience which rely on our own socialization. By extending his appreciation of the social nature of man, Hayek also deals with the dilemma identified in my introduction: if man’s unaided reason is not an infallible source of authority, to what sources of authority can one defer instead?

Hayek’s social theorizing is indebted to the eighteenth-century tradition of the Scottish social theorists, such as David Hume and Adam Smith. For them, society and its practices develop according to a pre-Darwinian social evolution. Whether by superstition or accident, particular institutions or practices become habitual and codified, such as private property or the nuclear family. Societies succeed because these institutions and practices harness healthy and productive activity, and win out over time in consequence of trial and error. Consequently, there is a prescriptive authority in favor of that which exists, and traditions which have been inherited. This provides a guide in determining individual and social behavior.

Prescriptivism is one of the guides of human action, providing a non-rational source of authority that allows humans to make decisions without having to rethink every choice from the beginning. However, although prescription encourages socially useful behavior, it provides no framework or detached standard with which to assess traditional inheritance and stand in judgement on it. There is the danger that prescriptive authority can develop into a monism of its own, just as deleterious as Enlightenment rationalism if taken as the only standard for social organisation. The point is made in the essay on Kierkegaard, that for all his sustained critique in the 1840s of political rationalism, he never made a similarly spirited critique of slavery; despite it being a keen topic of political discussion during that decade.

In the retreat from Enlightenment rationalism, the editors seek a balance between prescription and normativity. Wittgenstein, one of the great critics of scientism, dissolves this dilemma. The essay focuses on the later philosophy of Wittgenstein’s Philosophical Investigations (1953). For the later Wittgenstein, a description of a word was the same as the prescription for its use; a word is a tool in a public language, and how it ought to be used is determined by what speakers use it to mean. We therefore see a normativity born out of prescriptive authority, un-reliant on Enlightenment rationalism.

For Burke, the standard that superintends over prescriptive authority was the moral imperative of Christianity, and this theme is taken up in the essay on T. S. Eliot, in which tradition provides the framework for activity and creativity, but is to be supervised and criticized by “orthodoxy.”

The heterogenous nature of this collection makes summarizing all the contributions impossible. There are fine essays here on Tocqueville, Nietzsche, Marcel, C. S. Lewis, Gadamer, Voegelin, and Alastair McIntyre. One of the highlights of the collection was Jane Jacobs, in which her critique of rationalist urban planning is allied to Hayek’s own critique of rationalist social planning. The editor’s introduction mentions a prospective second volume, which could include essays on De Maistre, Carlyle, Coleridge, Spengler, Arendt, and Scott. I look forward keenly to such an interesting volume.

David Coates is an historian of political thought, who received his PhD from the University of St Andrews in 2020. He works as a project manager, and tweets @_jestingpilate_