The Function of Criticism in a Time of Entropy 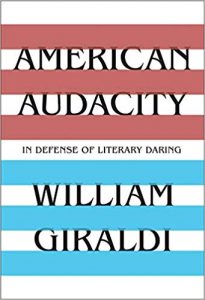 William Giraldi, author of the critical prose collected in American Audacity: In Defense of Literary Daring, is that rarest of creatures: a learned, witty, tough-minded, and discriminating man of letters. In the era of social media and instant information, when such culture as we have consists of non-art and pseudo-art and even anti-art, when judgment and fastidiousness are regarded with suspicion and scorn, the serious critic, Giraldi avers, “must be prepared to retake his traditional place as the arbiter of culture.” These pieces—culled from the pages of The New Republic, The Daily Beast, and other major outlets—prove that we have in our midst a critic eager to take up the cudgels for literature, and perfectly willing to escalate the war against kitsch and cliché, groupthink and faddism.

Giraldi, whose previous books include two acclaimed novels and a memoir, took the advice of his former professor Geoffrey Hill and set out to work “as a reviewer or literary essayist for the ‘common reader,’ as Dr. Johnson meant it.” Let us rejoice that Giraldi listened to Hill, for criticism of this caliber may go a long way toward reviving our debased literary culture. Giraldi asserts, in an uncompromising critical credo, that the critic must first be a reader and lover of literature, one who conceives of the art as “a means of enlargement and enhancement and understanding.” “The critic,” he insists, “should be tethered to no theory, no ideology, no asphyxiating ism.” Defying our ethos of zealous politicization, Giraldi makes so bold as to declare that “Ideology is the enemy of art because ideology is the end of imagination.” The critic’s sole fealty, he concludes, “is to the duet of beauty and wisdom, to the well made and usefully wise, and to the ligatures between style and meaning.” If such critics as Lionel Trilling and Randall Jarrell can be said to have a twenty-first-century heir, surely Giraldi is the man.

Giraldi believes that audacious American writers, forswearing the sentimental banalities and garish aesthetics of commercial culture, must seek constant communion with past masters. Today’s American writers “must exert an archaic mindfulness; they must resist a relinquishing of the past and a disprizing of standards; they must insist on memory and they must insist on influence.” Literary tradition, Giraldi suggests, is not a static display of antique books; it is, to use Robert Penn Warren’s words, a “vital and continuing process.” Our writers must have the audacity to look backward so that they might move literature forward. And the principle uniting writers past and present is “imaginative vitality,” a term Giraldi borrows from F. O. Matthiessen’s American Renaissance: Art and Expression in the Age of Emerson and Whitman (1941). Imaginative vitality, which our best writers have always exemplified, is what “American literature in the twenty-first century must aspire to: mystery, ecstasy, theodicy, the sublime manifest in language.”

Giraldi’s critical eye (and ear) never fails to detect the imaginative vitality in America’s canonical writers. If he underscores some things that are common knowledge, he does so in a rhetoric of renewed vigor. Thus we read that Emily Dickinson’s “metaphysics heave within the strictness of her form,” augmented by “all those gravid dashes.” In Moby-Dick, our quintessential prose epic, Melville speaks with a “volcanic tongue,” achieving a “deadly exuberance of expression.” In Flannery O’Connor’s “cosmos, reality oscillates from malediction to malefaction, and the postlapsarian horror occurs when opposites clash, when the disciple of one conviction meets the disciple of another.” Considering James Baldwin’s essays—in which imaginative vitality serves the purposes of literary and social criticism—Giraldi extols “the dialectical tenor” of the writing, and marvels over “those pregnant digressions and detours,” finding “the delivery unobtrusively sermonic.”

Our critic is equally adept at discerning the merits of contemporary American authors. Padgett Powell’s absurdist fictions present us with “a world recognizably ours but always somehow aslant, asunder: a world in which our consciousness is at bottom both heartache and hilarity.” The Ozarkian novelist Daniel Woodrell can compose sentences exuding “[e]ternal mystery coupled with the dimmest hope of deliverance.” Cormac McCarthy’s Lester Ballard in Child of God is among the author’s most “compelling creations because … his hungers oscillate from the elemental to the perverted, because he is too pure for heaven and too profane for hell, and because he is the child of an insane god deaf to every benediction.” Such elegantly penned insights abound. Even when one disagrees with particular interpretations or judgments, one relishes the manner in which they are rendered.

As these examples confirm, criticism for Giraldi must deal with the specifics of form and style, which generate theme and meaning, or else it is worthless: “The first criterion by which to judge any book must be the sentences: Do they work, are they imbued with torque and verve, do they have something lasting to say about a human circus both shining and absurd?” Giraldi dutifully attends to the artistry on the page, to the writer’s attainment of an original vision, to the potential permanence of the work itself. Not once is literature treated as politics by other means; not once is literature mangled on a Procrustean bed of ideological conformity. What matters above all are “those American books that are important because they are aesthetically audacious, daring in their form and mind, ferocious in their beauty: because they are, in a word, literature.”

The honest critic must be willing to condemn—and, consequently, offend—whenever vulgarity and mediocrity threaten to get out of hand. Giraldi isn’t afraid to employ the vituperative voice, and he pulls off his demolition jobs with signature élan. Books on a bestseller list, for instance, constitute “a whoredom of bad prose and tumescent plots.” The popular romance novelist Nicholas Sparks “is so chronically saccharine you can feel yourself getting diabetes as you read.” Academic theorists and critics, “those priests and priestesses of palaver,” tend to “defame great books and prefer bad books because those books bolster their identity-born grievances.” What passes for criticism in mainstream publications “reads like water-cooler conversation or, worse, like a Larry King interview.” E. L. James’s Fifty Shades novels “are the cartoonishly erotic-emotional suppurations of a hamstrung, not terribly bright adult trying to navigate a midlife crisis, and you get the sense that the lines arrived on the page as if by osmosis, unaided by even a subliterate serf.” Somewhere in the naysaying splendor of these sentences lurk the ghosts of H. L. Mencken and Dwight Macdonald.

An amplitude of literary reference graces nearly every page of the book. From Montaigne and Hazlitt to Oscar Wilde and Harold Bloom, Giraldi quotes one great writer and thinker after another. In an especially perceptive piece, Giraldi calls Joseph Epstein’s essays “troves of literary reference and allusion, maps between centuries, countries, genres.” One is inclined to say the same of Giraldi’s work, but his quoting habit can sometimes get in the reader’s way, hindering access to Giraldi’s own impressive thoughts. What’s more, all that quoting can belabor a point sufficiently made. (See the quotational excesses in “The Bibliophile,” an otherwise fine essay.) To be sure, this isn’t the ostentation of some nouveau-riche intellectual: Giraldi’s erudition is hard-earned, and, like most cultivated souls, he can’t resist sharing the best that’s been thought and said. And yet, for all that, one occasionally wants to hear a little less from Matthew Arnold and a little more from William Giraldi. This, however, is but a quibble.

Giraldi demonstrates what a master critic can offer us in a time of cultural entropy. The critic who upholds standards of excellence developed across decades of reading and living; the critic who instructs and delights with ringing affirmations of literature’s centrality; the critic who exalts the sturdy wisdom of the ages over the flimsy fashions of the hour—such a critic alone can help us rediscover our bearings amid the ruins. The author of this collection is indeed such a critic. But it is reward enough that Giraldi—as he says in praise of Cynthia Ozick—helps us to “understand immediately how criticism can itself soar with art, how the critical essay well done is its own best argument for being.”