The Great and Tolerable Empire 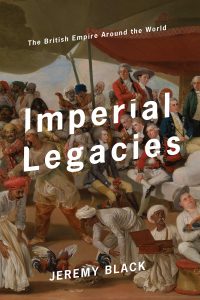 When a book is advertised as a “wide-ranging and vigorous assault on political correctness” one can usually expect that the reality will be a mere screed, one which (for the most part) targets real evils but (for the most part) does so on the basis of poor political philosophy, partial facts, and bombastic rhetoric. But when the volume so described has come from the pen of the distinguished historian Jeremy Black, one can be confident that it will be among the few to live up to its advertising. His recent Imperial Legacies: The British Empire Around the World does not just fulfill such expectations, it does so while taking up a cause that even many of more-or-less conservative dispositions are either too timid endorse in public or too influenced by pervasive left-wing prejudice to sympathize with in private.

Black’s defense of the British Empire centers on three major themes: First, that imperial rule, at least of a de facto variety, has been the norm throughout history, and so there is no meaningful question as to whether or not empires will exist. The only questions that are meaningful at the practical level concern what countries will attain imperial power and how imperial power is used. Second, that Britain was among history’s most benign imperial powers. It generally acted with considerably more justice than injustice and (with some notable exceptions) usually governed at least as well as the regimes that preceded and replaced it. Third, that contemporary ideologies and political agendas, rather than any objective assessment of historical facts, are responsible for the way in which the British Empire is singled out for criticism in today’s Anglophone world.

The first of Black’s themes is little more than an application to international relations of the basic truth that hierarchy is natural and inevitable. Just as more talented and more determined individuals will rise to greater wealth, power, and prestige within a society, then seek to pass their status on to their descendants, so too will more accomplished and more determined societies rise to greater wealth, power, and prestige in the world as a whole. Imperial Legacies bluntly affirms that equality is “unusual for any government” and that the relationships between British imperialists and native populations was often one of cooperation between differing orders within a hierarchy rather than the class conflict seen as ubiquitous by those who interpret history through the dirt-colored lens of egalitarian ideology.

Numerous considerations could induce a native population to accept British rule. In many cases Britain built its empire by driving out of a given region earlier foreign empires that were “native” only in the sense of being of more local origin and (crucially for later critics) non-European. “Subjugation” to Britain was in some cases the only way for a people to free themselves from oppression by a despotic regime or to re-establish order at a time of anarchy. Once imperial rule was established, the line separating “imperialists” and “natives” quickly became blurred. Intermarriage between elite British males and elite native females was not uncommon, and the children of such unions often became pillars of the empire. Numerous other common interests could tie members of a native population to the status quo. Did such factors result in widespread enthusiasm for British rule? No. Did they result in British rule often being considered tolerable enough? Yes. Was British rule often the best viable option, and could it be viewed as such by a native population? Again, yes.

The nature of opposition to British rule among colonial populations also must be noted. Prior to the spread of Western liberal doctrines throughout the empire, anti-imperial movements were not based in anything resembling commitment to egalitarianism or to “democratic self-determination of peoples.” The opponents of Britain were often native authoritarians hoping to reestablish their own power, or Pathan tribes wishing to continue their raids and their blood feuds unimpeded by any form of authority, or practitioners of suttee devoted to the immolation of living widows on their deceased husbands’ funeral pyres.

That the political left’s bizarre combination of social liberalism, egalitarianism, and hostility to the Western world is responsible for the fact that the British Empire is routinely castigated while the empires of the Ottomans, Manchu, Safavids, Soviet Russia, and Communist China receive more muted and less frequent criticism—when they are not defended—is only to be expected. But the extremes to which left-wing ideologues will go can amaze even those who suppose themselves hardened to absurdity. Some critics of the British Empire have lamented that the fall of Russian communism was a blow to the “anti-imperialist cause”—presumably on the grounds the Gulag existed to further the cause of egalitarian internationalism whereas the British Empire (however comparatively humane) was controlled by a class of gentlemen. Important elements within the Irish Republican Army sympathized with the Axis Powers, not just because they prioritized opposition to Britain but because they wished for an Ireland as “racially pure” as the Germany desired by the Nazis.

Such selective criticism is also to be seen in the way that criticism of the British Empire is sometimes used to obliquely address contemporary issues in international relations, more specifically the de facto imperial role now played by the United States. I do not, however, think Black adequately accounts for the extent to which a combination of the latter considerations with the best possible apologia for the British Empire cannot suffice to make a clear case in favor of American imperial power. Of course those who oppose the needlessness, excesses, injustice, and simple stupidity of much American interventionism can see the need for our country to maintain superpower status as a check on China. It should go without saying that criticism of what is often treated as the most exemplary case of American imperialism, involvement in the Vietnam War, tends to overlook the fact that no defense can be made of the communist North Vietnamese government and Viet Cong. But after such factors are taken into consideration “Empire America” still looks shabby compared to the Second British Empire—that which was built following the American Revolution, is stereotypically associated with the Victorian era, and was not marred by the sort of militant hostility to Catholicism that drove much of Britain’s earlier imperial expansion.

Contemporary American imperialism promotes a range of progressive causes that, in most cases, rose to prominence only during or after the years of the British Empire’s collapse. Throughout American history expansionism and interventionism have been driven by a desire to propagate either classical liberal or progressive ideologies (even to the point of using participation in World War II to undermine the empire of our closest ally in that conflict). The British Empire, despite being led by more than a few Whigs, tended to conduct its day to day operations on more reasonably traditionalist lines. To the extent compatible with British rule, native social hierarchies and political structures were largely preserved and incorporated into a worldwide empire rather than torn down in favor of egalitarianism and “liberal democracy.” Even those imperialists who hoped that the empire would, in the long run, further some form of liberal agenda recognized that a long, slow process (one that might take centuries) would been needed to achieve it. American interventionists often act as though a desire for “democratic American values” is so innate in all people that overthrowing a non-democratic regime, drawing up a new constitution, and a few years of American oversight are sufficient to turn any country into a mini-me of the United States.