The Importance of Being Iris 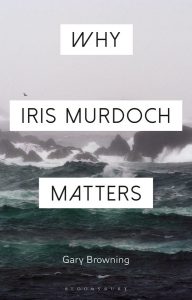 Philosophy and literature are often not very good bedfellows. For the most part, the novelist, or any artist, does not care about philosophy. It is the philosopher who often gets so completely absorbed in art that he tends to lose himself in it. This was not the case for the British-Irish novelist and philosopher Iris Murdoch. The line between philosophy and literature was as elusive as Murdoch herself, and she is among the very few to bring those two sometimes antagonistic forces together in a coherent, albeit complicated, unity.

This is one aspect of Murdoch that Gary Browning explores in Why Iris Murdoch Matters. Browning, a professor of politics at Oxford Brookes University, concisely illuminates what makes Murdoch an important contributor to both literature and philosophy and why she deserves respect and recognition. He draws from both published and previously unpublished works by Murdoch, including letters and journals, to show the various strands that connect philosophy, literature, and Murdoch’s life.

Browning organizes his thoughts on Murdoch in seven thematic chapters, rather than chronologically. The chapters deal with Murdoch’s metaphysics, morality, politics, and “her life and times.” While the book naturally contains a wealth of material on Murdoch’s personal life, the main objective is to show her deserved standing in both philosophical and literary pantheons.

Iris Murdoch was born in 1919 in Ireland. Despite the fact that her family moved to England when she was still an infant, Murdoch always felt close to her Irish roots. She studied philosophy at Oxford where she read Plato and the Ancients, and continued her study of philosophy as a post-graduate at Cambridge. In 1948, she became a fellow at St Anne’s College, Oxford, and taught philosophy there until 1963.

It is difficult to create a linear presentation of Murdoch’s education because much of it has developed and flourished through her numerous friendships and love affairs. Philosophy and eros (physical and metaphysical) have always been entwined, for better or worse. Most of this is seen through her lifetime correspondence with friends and lovers. As Browning summarizes, recipients of letters from her “include, among others, Brigid Brophy, the novelist and radical thinker, Philippa Foot, the philosopher, David Morgan, a student at the RCA … Michael Oakeshott, the political philsopher, Elias Canetti, the Nobel Prize winning author, and Raymond Queneau, the experimental French novelist.” Murdoch was always unique, even in the way she read philosophy, notes Browning: “Murdoch was virtually alone among Oxford philosophers in taking Continental philosophy seriously and her thinking about the history of philosophy and its relation to the present was idiosyncratic.”

In 1954 she met John Bayley, a literary critic, novelist, and a professor of English. They married in 1956. It is hardly a secret that Murdoch had numerous love affairs before she met Bayley, but others also after they married; the marriage continued until her death in 1999. Browning correctly mentions that it is easy to make Murdoch into an absolute saint or an absolute sinner. In his memoir, Elegy for Iris, Bayley focuses on her rapid decline in health due to Alzheimer’s. But as Browning points out, “Bayley’s narrative is selective,” especially in the matters of Murdoch’s multiple lovers, both men and women. Whatever the personal arrangement Murdoch and Bayley had, this strange relationship is one of the examples of Murdoch’s view of love, whose philosophical and erotic fluidity makes an appearance in many of her novels. Nevertheless, what makes studying and approaching Murdoch interesting is not dependent so much upon knowledge of her torrid love affairs or unconventional marriage as on her relationship to philosophy and literature.

Her philosophy, according to Browning, “represents a countervailing response, which continues metaphysics in a post-metaphysical age by drawing together forms of thought and action so as to make sense of them as a unity.” Her novels are informed by her philosophy and vice versa. In her novels she takes an opaque approach in the development of the characters and yet remains in line with the traditional novel as opposed to an abstract piece of work.

The notion that Murdoch’s novels are opaque has gained a life of its own, and it is not incorrect. At times it is difficult to penetrate into the meaning of her characters’ actions and motivations, and her novelistic time does not always move in a linear fashion. But a simplistic label of “opaque” is a great disservice to the profound depth of Murdoch’s work. Her fiction challenges the reader to look behind the mask and see the authenticity of an individual face.

Murdoch always tried to create unity in her ideas but without ever sacrificing one idea over the other. She prized the difference between literature and philosophy. For her, “philosophy clarifies and literature mystifies,” and consistent with this perspective, Murdoch’s literary output always alluded to—but never tried to “solve”—perennial philosophical questions. Even if literature does not “care” about philosophy, for Murdoch, the metaphysics of personal identity and existential conundrums her characters find themselves in are always there, either floating above or lying beneath the mask. As Browning writes, her characters were forced to “explore new possibilities of freedom.” Even in her first book, which was on Jean-Paul Sartre’s philosophy, Murdoch emphasized the “pursuit of individual freedom and what she terms the ordinary virtues of everyday life, whereby obligations to family and friends are conditions of self-development rather than barriers to an individual’s exercise of self-control.”

As mentioned earlier, we cannot discuss either Murdoch’s philosophy or literature without a deep focus on metaphysics. Browning claims that for Murdoch, metaphysics is both “dialectical and historical. Its dialectal quality is exhibited in the series of internal relations it establishes between forms of experience. The personal and the public, the disordered and the ordered, unity and plurality, and past and present are some of the constituents of her relational perspective.”

Browning is correct in his analysis. Murdoch thrives paradoxically on the various dichotomies and existential contradictions that are inhabited by the characters in her novels. It is people’s secret interior lives that interest Murdoch. She is curious what drives people to love and hate, to be good or evil. These themes alone are enough to deal with that most basic and complex of questions, what it means to be a human being.

Browning touches upon different aspects of Murdoch’s personal life and how they fit into her serious (but often humorous) explorations in literature. For those who are familiar with Murdoch’s works, this treatment will simply affirm their beliefs and analysis, but readers who are only now discovering Murdoch will benefit greatly from Browning’s introduction and assessment. One unexpected aspect of this book, however, is Browning’s discussion of Murdoch’s unpublished “Manuscript on Heidegger.”

It was slightly surprising that Murdoch would venture into the philosophical world of phenomenology. Continental philosophy is rather distant from the Anglo-American analytic tradition and Murdoch was surrounded primarily by analytic philosophy despite her primary interest in Plato. But as Browning writes, Murdoch “shares with Heidegger a common context for philosophical speculation, namely the crisis of metaphysics and a more general fracturing of traditional beliefs.” She agrees on much of what Heidegger says in Being and Time, but, as Browning explains, is critical of him “for his isolation of the individual from traditional religious sentiments and from wider social obligations.”

According to Browning, Murdoch takes Heidegger’s approach to metaphysics as an inspiring event. It is not clear from Browning’s explorations whether reading Heidegger is the first time Murdoch was fully exposed to phenomenology as philosophy, and her analytic background could easily be one of the reasons why Murdoch cannot agree with everything Heidegger claims. Still, she must be commended on her open mindedness in reading Heidegger since philosophers tend to be rather stubborn creatures. Murdoch’s persona as a novelist here plays an active role.

Trying to save metaphysics or at least rearrange it in a way that solves the problem of dualism, she finds Heidegger’s work worthy of studying, but still wonders what can really be made of this grand “Being” (Dasein) that is the object of so much of Heidegger’s attention. “Why bother about Being?” Murdoch writes in this manuscript. It may seem like a strange and contradictory question coming from a philosopher who is attempting to save metaphysics in a post-metaphysical world, but for Murdoch metaphysics must involve relation between beings. Her biggest criticism of Heidegger is that he “lacks, even rejects an essential connection with ordinary people and ordinary life.”

Murdoch’s philosophical intuitions, deliberations, and conclusions capture something correct about Heidegger. He placed anxiety, destiny, time, and most of all, language as primary movers of philosophy and hence life, an approach that is bound to end in metaphysical chaos, which denies the primacy of ethics. Browning points out that Murdoch also rejects Heidegger’s emphasis on transcendence. In fact, Murdoch “argues forcefully against forms of transcendence. She takes the cultural world of the late twentieth century to testify to the truth of Nietzsche’s conception of the death of a God that is separate from the world.” What Murdoch is looking for, unlike Heidegger, is unity between life thought and life lived. She ultimately looks to Plato and invokes “the notion of the Platonic Good as a unitary concept, which is not removed from experience and human endeavor …” Metaphysics must be connected to ethics, otherwise, there is no point to “Being.”

Throughout her life, Murdoch strove toward the unity of the life of the mind and the life of the soul. This is what distinguishes her from many philosophers and novelists. Browning’s book highlights this central theme in her life. It serves as an excellent introduction for the new readers of Murdoch’s novels and philosophy. At the same time, the inclusion of Murdoch’s view of Heidegger will certainly pique the interest of those deeply familiar with Murdoch’s work. Browning has achieved a unity in the diversity of her thought and readers will likely be convinced that Iris Murdoch indeed matters.