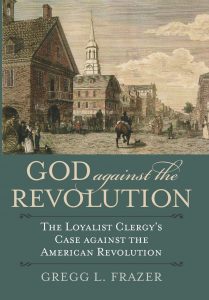 God against the Revolution: The Loyalist Clergy’s Case against the American Revolution
by Gregg L. Frazer.
University Press of Kansas, 2018.
Hardcover, 320 pages, $35.

Historians over recent decades have put considerable effort into recovering forgotten or marginalized perspectives from the past. Some perspectives, however, have been more marginalized than others. Less likely to draw sympathetic attention today, those viewpoints seem to provide at best subjects for historical curiosity because they stand apart from both established narratives and more recent efforts to revise or widen them. American Loyalists—nearly a third of the colonial population who opposed independence—offer a case in point. But recovering their perspective involves more than just an antiquarian exercise in digging up old ideas. Understanding how those who questioned and often resisted the fight for independence saw the matter brings issues at stake during the 1770s in focus on their own terms rather than those set by later generations.

The prizewinning colonial historian Alan Taylor argues persuasively that framing the American Revolution as a clash between British and Americans imposes a cohesive identity on a complex and divided reality along the Atlantic seaboard. It also obscures the fact that many in Britain, including Edmund Burke, opposed efforts to bring colonists to heel and instead urged reconciliation. What became a global struggle with intervention by France and Spain began as a provincial revolt and then escalated into a civil war within the British Atlantic world. Indeed, perceptive observers drew parallels with the English Civil War of the 1640 casting New Englanders as latter-day Cromwellians. William Jones, an Anglican High Churchman, described the struggle as a Presbyterian war. Religion shaped attitudes on both sides.

Gregg Frazer takes that insight for a starting point in his comprehensive account of Loyalist thought. While many who embraced independence framed the struggle as an appeal to heaven with God on their side, Loyalists—who considered themselves no less American than their opponents—strongly disagreed. The strongest case for their position, as Frasier points out, came from clergymen. Many of those arguments inverted or mirrored those of Patriots by appealing to rights and the rule of law. God Against the Revolution: The Loyalist Clergy’s Case Against the American Revolution traces them while taking into account divergent viewpoints on both sides.

Loyalists themselves differed, though more than a few had criticized British policy while rejecting armed resistance. Some, like the Swiss-born Presbyterian John Joachim Zubly from Georgia, began as Patriots before recoiling from armed resistance that sparked civil war. Frazer identifies at least 182 Loyalist clergy with three quarters Anglican and the remainder from other Protestant denominations. The five most prolific—Jonathan Boucher, Thomas Bradbury Chandler, Charles Inglis, Samuel Seabury, and Zubly—reflect that denominational balance. While drawing on other writings, Frazer uses their sermons and writings to explore how Loyalists argued from scripture, law, political theory, and prudential circumstances.

That clergy would appeal to scripture comes as no surprise, especially when Patriots invoked biblical authority. Fraser describes Loyalists resting more of their case directly on scripture with an interpretation at once more literal and contextual that took passages as they stood without adding interpretation from beyond them. Boucher and Inglis worried about the politicization of preaching, which they believed should determine the clear sense of biblical passages and then take them as instructions not open to further challenge. After all, sound reason could not differ in conclusions from revelation.

Their methodology deserves notice because it reflected their view of scripture along with a broader set of intellectual assumptions. Boucher deplored Jonathan Mayhew’s Lockean spin on Romans 13 for replacing “unerring standards of right and wrong” with “loose and debauched opinions.” Samuel Seabury condemned those who “have warped and forced particular expressions of the scriptures to make them comport with their own preconceived opinions.” Those rhetorical gambits, he said, deployed scripture to uphold positions that it could not support when seen by “a candid, unprejudiced mind.”

Scripture enjoined obedience to civil powers, which St. Paul in Romans 13 describes as ordained of God. Other passages of scripture Loyalists invoked backed this view. If even the most vile tyrants like Nero deserved obedience, how could it be just to resist George III? Biblical references to liberty, Boucher insisted, meant freedom from sin rather than political or civil liberty. Indeed, war and the sufferings it brought marked God’s judgment on a sinful people. Loyalists calling their fellow Americans to repent faced resistance as Old Testament prophets had done for calling Israelites to account during their suffering. Eschewing armed resistance for submission to Patriot authorities or flight from their homes and property to safety in British lines, Loyalist clergy practiced what they preached.

The doctrine of original sin, with its emphasis on the flaws in human nature, shaped Loyalist arguments from the nature of government. Civil society constrained willfulness in a manner that made rebellion which upset it especially dangerous. Fraser notes an ironic parallel between Boucher’s observation that lust for power endangered liberty were it not guarded by perpetual jealousy and James Madison’s more famous insistence later in The Federalist that “ambition must be made to counteract ambition.” Rejecting John Locke, Seabury described society as man’s natural state and one into which he was born rather than chose to join. The duty to obey constituted authority, Inglis argued, was compatible with self-interest and happiness because it kept together the peaceful society essential to both.

Loyalists found the idea of resisting laws unwise and repugnant. Only anarchy could result from subjects assuming a power to defy established authority, and Loyalist clergy dwelled on the consequences rebellion brought. Calling wars “among bretheren” the worst species of their kind, a theme dating from late Republican Rome, Zubly emphasized the opportunities they provided unscrupulous men to prey on their neighbors. Boucher amplified the point in saying that “a time of general disorder is to bad men what a shipwreck is to barbarians.” Successful revolt served as precedent and encouragement for future unrest. Fraser notes some Loyalist clergy qualified their position by allowing for resistance on justifiable circumstances like the Glorious Revolution of 1688, but that still raised a high bar.

Despite his popularity in other American circles, John Locke found no favor with the Loyalist clergy who rejected his arguments for a social contract and right to resist. Seabury’s view of society as man’s state of nature and Boucher’s insistence on God rather than man being authority’s ultimate source challenged Lockean premises. Their positions fit neatly with trends in eighteenth-century British political thought that had marginalized Locke as Court Whigs adapted some Tory arguments to defend the sovereignty of crown in parliament. Arguments Frasier explores here complement important scholarship on eighteenth-century British political thought by Jonathan Clark and Harry Dickenson. Their research suggests Loyalists were better attuned to trends across the Atlantic than Patriots, whose positions reflected arguments made decades before by opposition groups in England.

Reliance by Patriots on those older arguments revealed an especially wide conceptual gap with British opinion and Loyalists on legal arguments. The latter denied American colonies ability to legislate against parliamentary authority. Even during his Whig period criticizing British policy, Zubly considered the colonies dependent on the metropole. Defying parliament while remaining loyal to the king clashed with the fact that sovereignty rested with the crown-in-parliament rather than the monarch’s person. George III’s later statement that he was fighting the battle of the legislature recognized what his subjects took as a truism. While defending Parliament’s authority, Loyalist clergy denied the legality of Congress, which they considered a usurpation of power. Local committees also operated outside the law, which led in Seabury’s consideration to wanton abuse of power. Zubly, a Georgia delegate to Second Continental Congress who turned Loyalist, decried violations of rights and legal due process that left no one safe.

Zubly shows that Loyalist clergy differed on practical considerations, including the policies that had provoked resistance. Many, as Frazer points out, agreed with their fellow Americans’ complaints on certain points. Boucher joined Zubly in opposing the Stamp Act while blaming British officials for mismanagement and stirring colonial unrest. Far from blind apologists for Britain, Loyalists could be sharp critics. They also saw the danger of America being caught between measures Boucher called “injudicious, and perhaps injurious” and efforts to incite rebellion by magnifying them. Instead, Loyalist clergy urged reconciliation even as tensions grew.

Where Patriots framed British policy as a conspiracy to subvert colonial liberties and property that would reduce them to slavery, Loyalists had their own increasingly sharp conspiracy theory. It attributed discontent to efforts by self-interested, ambitious men who stirred popular discontent for their own advancement. Colonists damaged their own interest by a non-importation campaign that hurt their own property values and trade more than the British merchants it targeted. Enforcing boycotts meant coercion by committees whose invocation of natural rights brought Loyalist charges of hypocrisy. Boucher asked “what is tyranny but the assumption and exercise of power without any authority?” Patriot insistence on colonial self-determination prompted his retort claiming the same right for individuals unwilling to swear allegiance or face banishment from their communities.

Loyalists charged Patriots with doing unto other Americans what they claimed Britain had done to them. The costs of war far outweighed any taxes as the conflict left colonies in ruins. Alliance with France, an absolutist Catholic monarchy that had been their historic enemy, further betrayed principles to which Patriots appealed. Its stipulation that neither party make peace without the other exchanged British for French rule. Those arguments during the Revolutionary War had less effect as most Loyalists had either been driven out or silenced. Defeat at Yorktown and then British withdrawal decided the question.

Frazer credits Loyalists with making a stronger, better-argued case than recognized. Independence, however, stranded them between their identity as Americans and the principles and allegiance for which they had sacrificed. Loyalist arguments still resonated beyond the struggle that prompted them and had an afterlife beyond the present study’s scope. Writings and sermons contributed to political trends in Britain that laid a foundation for what became conservatism. Resistance to aristocratic faction and plebeian radicalism, and above all the French Revolution, gave them relevance even where not directly acknowledged or recognized. So even beyond their importance to pivotal aspects of American history where they lost, the Loyalist clergy and their case deserve the second look Frazer provides.

William Anthony Hay is professor of history at Mississippi State University. He is the author of Lord Liverpool: A Political Life.