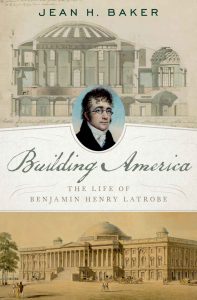 Benjamin Henry Latrobe is, in two ways, not Pierre L’Enfant—he was not, despite his surname, French; and he does not enjoy the same fame (nor is there a prominent square or plaza in Washington, D.C. named after him). But while Latrobe didn’t build Washington itself, he did build the first iteration of the U.S. Capitol, befriend multiple presidents and, among much else, plan and construct Philadelphia’s first waterworks, work on steamboats with Robert Fulton, and furnish the White House with Dolley Madison.

“Seven years after his arrival in the United States, Benjamin Latrobe had signed on to design the US Capitol.” So begins Building America: The Life of Benjamin Henry Latrobe, by Goucher College professor Jean H. Baker. The expansive biography follows the early American architect and émigré from his English and German childhood in the authoritarian-communitarian Moravian Church to his financially troubled but successful American career.

Despite not being much of a household name, Latrobe (1764–1820) was in many ways America’s first professional architect, and much of his work, not least the Capitol (though much altered since) survives. He built Philadelphia’s first waterworks, including a magnificent Pantheon-like building to house the pumps. (Neither of these survive, the waterworks being superseded by a more reliable one a few decades later.) In Latrobe’s America, architects, who barely existed as a recognized, skilled profession, drew up plans while builders or carpenters executed them, often altering or botching them in the process. Latrobe considered himself above a builder or carpenter, though, being unfamiliar with the idea of professional architecture, many of his partners and patrons did not.

Latrobe’s contributions to the idea of architecture may be more important than his actual buildings, innovative though they were; as with other areas, not least the law, American pride and independent-mindedness left the country without strong institutions and clear regulations or best practices. Latrobe did for architecture, particularly public architecture, what John Marshall did for the law. Perhaps it is a shame that architecture has become such a specialized profession; Latrobe’s training, such as it was, made him not just an architect but something of a Renaissance man.

Perhaps the most compelling threads in Building America concern not Latrobe’s buildings, but the man himself, particularly his identity and self-conception. Latrobe is, and imagines himself to be, an American to his bones—despite his family myth of descending from noble blood and his taste for aristocratic life, often frustrated in America. His combination of almost crude American nationalism and refined European cosmopolitanism was itself very American; the young republic wrestled greatly with what a distinctly American civilization would or should look like, and this resulted in much contradiction and admixture. Latrobe was not very different in this respect from his friend and benefactor Thomas Jefferson, with whom he worked during his first stint as the Surveyor of Public Buildings in D.C., working principally on the Capitol. Despite Latrobe’s aristocratic tendencies, he made sure to include galleries where ordinary people could observe the legislators. He, and the young country, contained multitudes.

Latrobe comes across as rather impatient and quite proud, even arrogant. But he was also a true genius in his field, and therefore deserving of a certain arrogance. He had little patience for the American fear of big government, which manifested itself here in the form of a very hands-off approach to public buildings and infrastructure. He was a fierce believer in the need for internal improvements, in a more Hamiltonian than Jeffersonian vein. Latrobe constantly dealt with expired funding, bemoaning the fact that Congress would not appropriate the necessary funds for the projects it claimed to support—or demanded that he finish.

For his part, he was nearly always late and over-budget, whether working on public buildings or on a steamboat venture with Robert Fulton that, not for the first time, left him nearly penniless. Alongside the highly competent professional, there was a touch of the classic American con man in Latrobe, as well as the rough-and-tumble American entrepreneur. Imagine a neoclassical Le Corbusier, and cross him with a Colonel Sanders who sells Brooklyn Bridges along with chicken, and you have a sketch of America’s first architect.

This tendency for financial mismanagement Latrobe blamed on his Moravian upbringing, a very different milieu from the Protestantism than spawned the famous work ethic. His native confidence and his lack of financial literacy led him to be, in Baker’s pithy words, “a speculator so certain of his success that he denied he took risks.” In the realm of faith, he responded to this stifling childhood by embracing a thin, deistic religion, and also—perhaps to the confusion of a modern conservative—by reveling in his marriage and children. Moravianism emphasized communal upbringing of children and placed the community of the church above the family. While his family life might appear traditionalist today, it was fairly progressive for the time; he was very close to his children and he viewed his wife as a companion, romantic partner, and an equal. It is fascinating that progressivism can manifest itself so differently in different cultural contexts.

A final thought: Would Latrobe have welcomed President Trump’s recent executive order enshrining classical architecture as the default style? Latrobe was controlling and arrogant, and he despised sharing the design or construction of a building with anyone else; he would regularly disown or minimize his involvement in projects where he was not the sole designer and builder. He certainly promoted the grandeur that the then-bare city of Washington enjoyed under neoclassical public architecture, and his letters evince a hope and desire that future Americans would look back fondly on his work. But he would also likely have chafed at the thought of architecture being moved from the domain of the architectural professional, which he fought so hard to carve out as a legitimate field on the level of law or medicine, to the political realm. The man who once went toe to toe with President Jefferson himself over skylights in the Capitol ceiling would not likely have embraced being told in what style he had to build—even, one suspects, if it was his own.

While Baker’s biography is long, it is comprehensive, not bloated, and its diversions into subjects like Latrobe’s letters to his brother and his personal struggles, financial and otherwise, make him human. “We are jammed,” Latrobe wrote mainly of himself, “between our republican principles and our aristocratic wishes.” Latrobe’s contradictions were to a great extent America’s contradictions, and his contributions—a real professional zeal and a legacy of architecture as a skilled, trained craft, do indeed deserve the title of this book.