The Order that Transcends the Upheavals 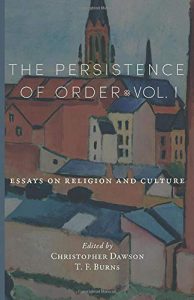 “Western civilization today is passing through one of the most critical moments in its history. In every department of life traditional principles have been shaken and discredited, and we do not yet know what is going to take their place.”

These words were not written this spring in response to a deadly pandemic, state-issued lockdowns, mass rioting in American cities, or the toppling of historic monuments. They were written ninety years ago by the English historian Christopher Dawson, and they have lost not a drop of their potency.

Dawson’s prognostication appears as the introduction to a series of essays he edited in the interbellum period, as the world economy stagnated, as communism deepened its hold in Russia, as fascism began to rise in Europe. They were penned by Europe’s brightest minds, and they have been reprinted for our own times in three volumes under the modified title The Persistence of Order. These essays are as impactful today as they were nearly a century ago because they cut through the transitory character of current events to probe transcendent questions concerning human nature, the core elements of civilization, and the true ends of politics. Composed with a sense of urgency, they confront enduring questions across departmental lines. Though they intentionally lack a systematic approach, they all come to the same conclusion: that civilization requires order, and the source of that order must be spiritual, not material, for society to thrive. This is a lesson we need perhaps even more now than when the essays were first drafted.

The order in question is deeper than simple human organization or the absence of unrest. It is metaphysical order, the foundational source that brings civilization to life and toward which it strives. As Dawson himself, who contributes an essay to each volume, explains, “True civilization is essentially a spiritual order, and its criterion is not material wealth, but spiritual vision. It seeks a Theoria—an intuition of reality which is expressed in metaphysical thought and bears fruit in artistic creation and moral action.” The modern world has brought crisis upon itself, Dawson continues, “due either to the denial of the existence of spiritual reality or to the attempt to treat the spiritual order and the business of everyday life as two independent worlds which have no mutual relation.” The ills of Dawson’s day have multiplied and morphed, now manifested, to name but a few, in the breakdown of the family, the legal sanction of abortion, and the redefinition of human nature itself. But, at root, modernity’s failings since the Enlightenment all stem from the same core: the denial of a spiritual order that gives purpose to our lives and that provides external standards for moral action.

A people’s prevailing religion shapes its civilizational order, from Confucian China to the rationalism of the Greeks to Christianity in Europe and the New World. For this reason, Volume I examines religion as the source of culture, with Jacques Maritain opening the exploration. True religion, he argues, comes not from man but from God, and, as a transcendent force, it “is the supreme benefit and animating principle of all civilizations and cultures, while in itself independent of them all, free, universal.” Jesus Christ, he continues, must be immanent within a healthy culture, so that “a Christian civilization appears as something truly maternal and sanctified, procuring the terrestrial good and the development of the various natural activities by sedulous attention to the imperishable interests and most profound aspirations of the human heart.”

Peter Wust and Dawson each provide vigorous overviews of the West’s religious history, articulating how Christianity emerged as a unique force from the ancient world and became civilization’s driving influence until modern Europeans slowly began to lose faith, allowing materialism to impose a porous order in Christianity’s place. “The crisis of spiritual sickness,” laments Wust, “is reached when the dying man no longer recognizes himself as moribund. It is the point where the paroxysm of fever turns, as it were, into spiritual delirium.” Dawson, in a griping conclusion that proved prophetic of the turmoil in the year 2020, agrees: “Without spiritual order the cosmopolitanism of modern culture does not make for peace; it merely increases the opportunities of strife. It destroys all that is best and most distinctive in the local and national cultures, while leaving the instincts of national and racial hostility to develop unchecked.”

The theme of spiritual order palpates through Volume II’s essays that seek to reground politics and society into the metaphysical foundation articulated by the Christian faith. The five essays collected here examine science, psychology, democracy, communism, and humanism.

They offer aged wine in fresh skins, probing beyond the confines of their times into eternal questions. In the field of psychology, for example, Rudolf Allers urges practitioners “never [to] forget that the ultimate riddle of human nature and its destination cannot be solved by science.” Nicholas Berdyaev offers penetrating analysis into the spiritual rise of communism in Russia (for which he blames, in part, Christians failing to live their creed) and its status, not as a social system, but “as a religion that is striving to take the place of Christianity,” with its own doctrines of salvation and eschatology.

Dawson and his co-essayists insist that Catholicism provides the world its ultimate spiritual force, since it provides the continuous historical link to the incarnation while bringing together the powers of mysticism and metaphysics into “a spirit that strives to incorporate itself in humanity and to change the world.” Michael de la Bédoyère holds that “many of the benefits of Catholicism can spread to those who do not accept the full claims of the Church” since “its influence on the moral and cultural order has always spread far beyond its specific religious appeal.” What he wrote ninety years ago—that Catholicism in particular and Christianity in general “has counted for less and less in the factors that make up our culture”—strikes a wistful note in a new era when one-quarter of Americans have dropped out of churches and even the first amendment’s guarantee for the free exercise of religion is under siege.

The urgency of the essays pairs with a keen realism. The authors are not integralists dreaming of a restoration of monarchy to bolster the Church. Rather, they seek to infuse democracy with the spiritual order it requires to resist morphing into mob rule. Bédoyère notes an essential irony: “Catholicism has never been democratic in spirit,” yet “it has been the strongest upholder of the essence of what democracy aims at defending, the unalienable rights of man, who is the image of God.” Equal rights under the law requires first an understanding that all people are not historical accidents, but creatures willed by a benevolent creator who has ordered all things in measure and number and weight.

The authors know that we cannot turn back the clock; the old world with its Christian principles has been lost. Nevertheless, they also agree that not only is a Christian revival the only hope for civilization regaining its breath, but that such a revival is still possible—history demonstrates stranger twists. But it depends, as both Wust and Berdyaev agree, upon Christians reforming themselves and living the faith they profess. Their failure to do so, writes Berdyaev, gave birth to communism “as a punishment and a reminder, as a perversion of some genuine truth.” The only response that answers our deepest hopes, Wust exhorts, requires serious action: “Get on in every respect with your own work. Make yourself Christian: completely Christian. Then look around you, and perform the work that has been given you, according to your capacity. But wait in patience. For it is only the sowing that is your business. Leave, with childlike trust, the gathering of the harvest to the generations that God has called to that magnificent task.”

David G. Bonagura, Jr. teaches at St. Joseph’s Seminary, New York. He is the author of Steadfast in Faith: Catholicism and the Challenges of Secularism.