The Origin of the Secular Species 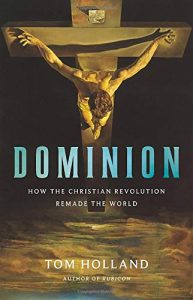 “Just as the Bishop of Oxford refused to consider that he might be descended from an ape,” Tom Holland writes cleverly in the introduction to his enormous new book Dominion, “So now are many in the West reluctant to contemplate that their values, and even their very lack of religious belief, might be traceable back to Christian origins.” Holland’s book is an attempt to argue that modern European civilization has its roots in Christianity, and that European culture is still “saturated by Christian concepts and assumptions.”

Holland is a novelist and historian, whose elegant prose, good humor, and keen sense for an arresting image has been matched by a instinct for scholarly adventure. In his In the Shadow of the Sword, for example, Holland argued, in the face of some amount of Islamist intimidation, that the evidence for the historical truth of the origin stories of Islam is lacking. In Dominion he takes on the cheerful prejudices of secular liberalism.

A great strength of Holland’s book is how it takes the reader back to when Christianity was not institutional and traditional but new and revolutionary. “[Corinth] had a long tradition of hosting eccentrics,” Holland writes in one wry passage:

Christian belief offered the lowliest of men and women transcendent dignity. A slave girl, Blandina, who the Romans would have seen as having only functional value, became more of a hero than hulking centurions for her willingness to endure punishment without abandoning her faith.

Of course, the purity of persecution did not last. Holland writes well about struggles between Christians, eschewing doctrinal minutiae to put them into the context of fundamental disagreements about the relationships between Christians and God and Christians and the world. He is slightly less clear on how the Romans came to accept Christianity, though his narrative appears to be contiguous with the idea that it was a universal faith befitting of an Imperial power.

The coercive features of the spread of Christianity, for Holland, reflect the perversions of power. He quotes a vivid statement by the scholar Alcuin, who objected to forcing pagans to convert by saying:

Let peoples newly brought to Christ be nourished in a mild manner, as infants are given milk—for instruct them brutally, and the risk then, their minds being weak, is that they will vomit everything up.

This may sound more pragmatic than liberal but it does reflect a strange, for the time, confidence in the power of education to shape the beliefs of the common man. Holland is keen to emphasize these progressive elements of history that he argues, with some justice, have helped to shape the modern world. Charity became enshrined in legislation, for example, as being able to access the necessities of life became “in a formulation increasingly deployed by canon lawyers” a human “right.”

I think Holland slightly overdoes this. “Paul, writing to the Galatians,” he states,

had insisted that there was no longer either male or female, for all were one in Jesus Christ. Yet even he, on occasion, had felt unsettled by the sheer subversiveness of this message.

This is, I think, a simplification of Galatians 3:28 that makes it more subversive than it actually is. Adolescents and octogenarians are equally eligible for salvation, in the Christian faith, but that does not mean that they have equal earthly functions.

Holland’s stylistic talents add a great deal to the book. His portraits of Boniface, Luther, and Calvin are vivid, evocative, and free of romanticization or its opposite. Some of his accounts of episodes in religious history are a little superficial—he could have read Helen Andrews for a more complicated portrait of Bartolomé de las Casas, for example—but a sweeping historical narrative without superficial aspects would be like an orchard with no bruising on the fruit. It is only natural.

Some secularists write as if everything good about the modern world is the result of the Enlightenment and its promotion of the natural sciences, liberalism, and secularism. Holland has no time for this. Was the idea of the preeminent significance of the individual not rooted in the idea that each man is equal before God? Did the idea of the separation of church and state not go back to Augustine? Had Aquinas not said the Holy Scripture “naturally leads men to contemplate the celestial bodies”? One could mention previous Christian achievements on which liberalism depended, such as the promotion of monogamous unions and the prohibition of cousin marriage.

Holland is right about this, and does not neglect the dark corners of the Enlightenment: the graves of Frenchmen massacred by revolutionaries, the morbid fantasies and secular hubris that led to communism. Again, though, I think he squints too hard when he describes modern phenomena as Christian. That something was inspired by X does not mean it is true to its essence. Thus, Holland writes:

If opponents of abortion were the heirs of Macrina, who had toured the rubbish tips of Cappadocia looking for abandoned infants to rescue, then those who argued against them were likewise drawing on a deeply Christian supposition: that every woman’s body was her own and to be respected as much by every man. Supporters of gay marriage were quite as influenced by the Church’s enthusiasm for monogamous fidelity as those against it were by biblical condemnations of men who slept with men. To install transgender toilets might indeed seem an affront to the Lord God, who had created male and female; but to refuse kindness to the persecuted was to offend against the fundamental teachings of Christ.

Permit me to analogize: if two sons are influenced by their fathers’ hard work, dedication, and willingness to learn, who is more like him, the son who follows him into the building trade or the son who makes use of these qualities as a bank robber? That different phenomena have Christian influences does not make them equally or even comparably Christian.

We have to look not just at what survives of Christianity but what has been lost. I agree with Holland that the natural sciences can be aligned with Christian belief, but the predominant explanatory power of secular authorities has inarguably weakened the faith. The abandonment of metaphysics, on which Christian scholarship was founded, was another grievous blow. Finally, the elevation of choice to the highest principles of culture indulges worldly desire over religious adherence. Christianity, in Holland’s book, is a genetic relic.

Still, the tension of Dominion is a haunting one: the tension, that is, between the revolutionary and conservative implications of the Christian faith. On the British right, we—and especially those of us who are not believers—sometimes like to think of Christianity in a mild Scrutonian sense, as a source of wonder, beauty, and social cohesion. What hums throughout Dominion, though, is the intense evangelical spirit of the faith. The most impressive person in the book is St. Paul, striding between cities full of spiritual vigor. Why? Because it was God’s will. And because, as Jean Danielou wrote in his striking little book Prayer as a Political Problem:

Christ has come to save all that has been made. Redemption is concerned with all creation …

This is not to claim that true Christians are fanatical. Paul himself, as Holland writes, was something of a realist. But the desire to spread the faith is essential to it—the animated evidence of its truth.

It is to Holland’s credit that the spiritual excitement of evangelists, and the iron resolve of martyrs, and the savagery of persecutors, is described so vividly and so formidably. For all my analytical differences with Holland’s narrative, this is a beautiful book, rich in detail and elegant in argumentation. It will inspire believers and non-believers to think about the past with more respect and more curiosity. But it should inspire believers to ensure that Dominion is inconclusive.

Ben Sixsmith is an English writer living in Poland. He tweets at BDSixsmith.