The Power Has Flowed Away 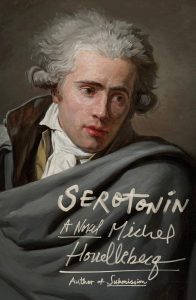 “Did we yield to the illusion of individual freedom, of an open life, of infinite possibilities? It’s possible,” Michel Houellebecq’s protagonist says toward the end of his pathetic life in Serotonin. Though the book appears at first glance to be merely a near-plotless journey with an impotent French bureaucrat through his attempts at escaping ennui, the narrator’s own ailment is also the ailment from which Western civilization suffers under the Dead Consensus of neoliberal free trade, globalization, and Epicurean libertinism.

While not as scandalous as Houellebecq’s 1998 Atomised, a commentary on the hippies and their children adapting to modern society, or as colorful as Submission, Houellebecq’s own dystopian-turned-utopian France under Salafist control, the prescience of Submission can’t be missed in 2020. Behind the protagonists own struggles are the West’s struggles with impotent and sterile bureaucracy, the free trade ideology, and the uselessness of once-estimable men in such a world.

The book follows the final years of Florent, a womanizing French agricultural bureaucrat of moderately high status who longs for not just his youth, but for Camille, a woman who left him due to his own rash actions many years before. After going on anti-depressants that kill his libido, he makes a break with his old life, quits his job (which he hates), leaves his Japanese-aristocrat imported girlfriend (whom he hates), and spends the next months reflecting on how it all could have gone so wrong. Like any story of decline, the book drags at points and you wonder if there’s ever a climax or if it will slowly just peter out into nothingness, until the last word of the last sentence of the last page. Florent spends most of his days attempting and failing to relive nostalgia, to live out a better time when Europeans could simply vacation, sleep with each other, go to work, get paid, and not have to worry about the pains of the modern world. He pines for the past, when he had first met Camille and when his work had the illusion of being meaningful.

Both his relationship with Camille and the illusion of meaning in his bureaucratic pencil-pushing job are revealed to be exactly that: illusions. He is revealed to be impotent not just romantically but professionally. Camille leaves him. The dairy farmers whom he defends to the EU free trade bureaucrats end up facing a series of losses and France’s agricultural sector gets pummeled under Brazilian, Irish, and American imports. He gets an imported girlfriend along with his imported food.

He attempts to flee to the countryside to meet up with an old friend, Aymeric, an aristocrat turned dairy farmer. Through a flashback, we see the friend and his lovely wife rehabbing an old chateau on the farm property. The future looks bright for the well-educated young man from a long-line of landed gentry, knights, and honorable Frenchmen dedicated to supporting the French peasantry. But this is, after all, a Houellebecq novel. Fast forward twenty years, and free trade and the new millennium have had their way not just with local industry across France but also with the now-grizzled aristocrat and his family. The chateau, his business, his family, and his liver are in complete shambles. Just like Florent, he has been rendered superfluous and impotent by a trade ideology and its requisite bureaucracy in which local industry is entirely substitutable with imports.

The horror with Houellebecq’s work is that it’s not hard to see ourselves in his protagonists. They seem contemptible and rash—the children of hippies in Atomised, the French elites who sell out to Salafism in Submission—but he shows you how you, too, through a series of small concessions by small concessions, could join their ranks. It’s no different in Serotonin. The free-trade ideologues promised us a trade we couldn’t refuse. They promised us wealth beyond our wildest imaginations. They promised us opportunities that you couldn’t even conceive of now. They showed us all their economic models and assured us that free trade will eliminate “deadweight loss” and that if you opposed it, you’d just have to look at the models again. All we would have to do is trade our local goods for imported goods. What’s the difference between French and Brazilian milk, anyway, especially if the Brazilian milk is cheaper?

Both men, Florent and Aymeric, come from well-respected families. In a past life, Aymeric may have been a knight or an aristocrat charged with protecting his local community. Florent sees him, in a pitiful drunken stupor, pining over a portrait of an ancestor: “a squat man, with a square and perfectly hairless face, his eye malicious and beady, strapped into a suit of metal armor … he emanated an impression of extraordinary physical power and brutality. ‘Robert d’Harcourt, known as the Strong …’” Without meaningful work, families, or causes, they find themselves wasting away. Nothing more than deadweight loss in the free-trade regime. Aymeric finds a sliver of meaning in a last act of futile resistance.

One need not be a pencil pusher in the EU’s nightmarish bureaucracy or a French dairy farmer to see Florent and Aymeric in our own societies. Take a moment to look around the West today and you see a crisis of serotonin—a crisis of potency. The massive sprawling bureaucracy of Western nations was entirely useless against the spread of coronavirus (and quite arguably made everything worse by blocking trials of life-saving drugs and stumbling over its response).

The riots across the United States, the UK, France, and other Western countries are no more reassuring. Young people who a few generations ago would have found meaning and potency in building a family, working a respectable job, or fighting a just cause for their nation are left to pornography, paltry service-industry work (if they weren’t put out of jobs by bureaucrats responding to coronavirus), and a state so sterile and globalized that the idea of a just war is foreign to them. Is it any wonder they take to the streets? Or do so vicariously over Twitter?

Even the laptop class—engineers, journalists, and other “knowledge workers” who reaped the rewards of globalization—now fret about job security under a regime of remote work. Why pay $5 for a gallon of American milk when you can get Brazilian milk for $3.50? Why pay $125,000 for a software engineer in San Francisco when you can hire one in New Delhi for $40,000? The slow march of sterilization and impotence has been the spirit of our age.

Living out the rest of his life on anti-depressants, Florent reflects: “Did we yield to the illusion of individual freedom, of an open life, of infinite possibilities? It’s possible; those ideas were part of the spirit of the age; we didn’t formalize them, we didn’t have the taste to do that; we merely conformed and allowed ourselves to be destroyed by them; and then, for a very long time, to suffer as a result.”

Both Florent and Aymeric suffer under the system, but the reader is left finding Aymeric’s resistance less contemptible, even if he lives the shorter life. And that’s the cruelty of systemic, collectivist change like bureaucratization and globalization. Even if you want to resist the spirit of the age, mere conformity allows you and your countrymen to be destroyed and suffer. The Dead Consensus leaves its subjects feeling dead.

Zak Slayback is a principal at 1517 Fund, a venture capital firm investing in young founders. He tweets at @zslayback and writes at zakslayback.com.