The Power of Citizens Organized 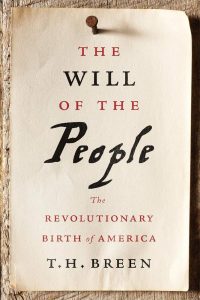 Harlow Giles Unger’s recent biography on Thomas Paine makes the clarion call that Paine’s written words aroused his countrymen to action; his ideas helped shape the Declaration of Independence and the Bill of Rights. It’s also likely true that as a defining muse of the American Revolution Paine’s reputation has been relegated to history’s dustbin since no one seems to know where his remains rest.

Still Paine is one of many vivid eighteenth-century figures revered as “Founding Fathers,” a phase popularized by Warren Harding suggesting it was they alone who played key roles in the formation of the new country’s independence-birthing events. Such an approach has merit but focuses on a small group of Founders. Something has been missing in this familiar story.

In an elegant and different book, T. H. Breen documents the constructive and stabilizing ways in which communities of ordinary folk who comprise “the will of the people” took responsibility for the actual course of the revolution. Professor Breen asks his reader to consider how a rural countryside minister might use the Bible and his own commonsense notions of civil liberty to propel his parishioners to mobilize and maintain allegiance to the colonial cause. It’s a neglected and under-appreciated story, as Professor Breen notes: “the story of those people whose will the republican system was meant to reflect … a founding people rather than a few Founders.” More to the point, Professor Breen suggests that if in fact “ordinary people … sustained the revolution in [their] small communities,” then throughout America “a different understanding of liberty” developed, “one that is now more than ever worth recovering.”

Professor Breen adds to his argument the notion that we should therefore attend closely to such sentiments as those voiced by Levi Hart, a Connecticut minister, highly respected, and a sermon titled “Liberty Described and Recommended.” Liberty, the good minister voiced to his congregation on a Sunday in 1775, a noteworthy date, is a “positive good.” Then with careful and common sense he qualified his enthusiasm thus: “Some people always give in to excess.” Therefore liberty is too often understood as the ability and power of doing as we please. One should therefore note that this small Connecticut congregation is a small portion of the “public square” into which “opinion” ventures.

Reverend Hart’s opinion for his congregation is wonderfully posed: The liberty of self-indulgence that is an expression of individualism poses a serious danger to civil society. Civil liberty does not mean freedom from all law and government. In fact, such liberty of self-indulgence is akin to mankind in a state of nature—that is, not a form of liberty flourishing in stable communities, which one should note are synonymous to those “little platoons” so admired by a conservative mind like that of Russell Kirk.

Liberty has to be considered and defined with reference to society. Regarding that society Professor Breen turns his well-documented attention to the fundamental character of a republic founded on the will of a people who had to convince themselves about the revolutionary challenge. An example cited early is the story of Matthew Porter, an immigrant from Ulster who settled in Bridgeton, New Jersey. A group of citizens concerned about the circumstances of the times announced they would communicate weekly to their neighbors the results of their inquiries into important subjects particular to their “place.”

What came into existence was a variety of newspaper, the Plain Dealer. The problem was the inability to obtain a printing press. Improvising, then, they used the resources at hand, urging authors to attach handwritten essays to a board in Matthew Porter’s tavern. A new essay would be published each Thursday with the names of the authors secret. Patrons at the tavern were urged to discuss the essays. At first the essays urged improvement in the general level of education, albeit six months after the Battle of Bunker Hill. Noting for the moment, however, that only a few issues of the Plain Dealer survive, over the next several Thursdays one essay emerged praising the “True Whigs,” who believed that “all power is derived from the people and not from any imaginary divine right.” Professor Breen makes the argument that in the following weeks the local folks of Bridgeton found it increasingly difficult to ignore the crisis. How would armed resistance in Boston, for example, play out in Bridgeton? The people in Bridgeton found they could no longer escape the “revolutionary ferment.” The citizenry had to declare where they stood, even if the following weekly topic concerned a prurient analysis of bundling.

Professor Breen’s salient points emerge with detail as he follows the shifting “perspective from national congresses and crucial battles to the affairs of small communities [exposing] what has long been a nettlesome question about the American Revolution.” When the British Parliament gave no ground and an army of occupation was dispatched to Boston, in the provincial areas of the Massachusetts colony “local committees … sprang up, each one a spontaneous expression of popular anger about how Britain’s rulers had treated the Americans as lesser subjects.… [and] ordinary people began discussing in earnest strategies of resistance.” When Professor Breen advances his narrative in 1774 with what he refers to as “a widespread eruption of popular political energy,” such movements did not develop smoothly toward independence as a predestined event. Those bonds of political identity with Great Britain were not easily ended; more so, the Boston urban protests against the Stamp Act and the Townshend Acts did not create a share of revolutionary fervor in the more rural areas and among ordinary people.

It’s a curious anomaly according to Professor Breen, who then asks when did the American Revolution actually begin? There can be no doubt, he suggests, that on April 19, 1775, the American political landscape began to shift as even obscure villages began to deal with the crisis: In the Fifth Parish of Gloucester, a small group describing themselves as “few in number,” and not having skill in “politicks,” deemed it time to speak up. Such became a whirlwind of activity following especially the “Coercive Acts” that upset the governments of local communities that had for good periods of time relied on local governance. “As with so many imperial policies that only make sense thousands of miles from the places where they are implemented,” Professor Breen writes, “this one interrupted routine business while inflaming universal anger.”

The consequence arises not only from the resolve of the congress held in Philadelphia but how that resolve was carried into existence by those ordinary people. What figured prominently in the early years of the rebellion was the attempt on the part of the British to limit popular participation in local government. Those ordinary folk, on the other hand, doggedly preserved control of their political situation through a committee system even when the people acting on these committees had little previous experience in local affairs.

Many records have been lost, but enough survive to argue that the local committees understood the spirit of their union and the management of special matters for the public good and safety. For the most part, the activities of the committees taking control of the resistance movements and tasked with implementing did so with prudence and with an eye to public opinion. And in most cases, the people of a community owned a belief that they should have the opportunity to confirm or annul their former choices.

But even with an expanded franchise and with the expanded committee system throughout the colonies, the danger was that resistance to the Crown made a person subject to arrest. It was common, then, to rely on a “safety in numbers” notion for, say, “The Committee of Safety” in Wilmington, North Carolina; the members would go in their large body to the households in the town and one-by-one request the members to sign the resolves of that late Congress held at Philadelphia. Professor Breen writes that one can only imagine the “shock residents of Wilmington felt when they confronted such a large committee standing in front of their homes. Under such conditions only a very brave or foolish person would have refused to sign the Association.”

The War for Independence like any revolution raised unprecedented challenges and in this sense, Professor Breen writes, the “committees were genuinely revolutionary bodies.” But the story of how Americans handled those challenges during moments of extreme tension stopped short of instituting a reign of domestic terror, even against the hated Tories. And whether the committees in any state aspired to inquisitorial powers over everyday “political affairs is highly doubtful.” It is not a concise test, Professor Breen remarks, but “the actions taken by these committees served as a general test for the legitimacy of the new political order.” “They did not allow passions to run amok.”

A difficult question did arise, however, about shared economic sacrifice, more so when support for the Revolution needed to continue. When popular anger did emerge and the Continental currency suffered depreciation, growing domestic peril among friends and neighbors emerged and mutual trust eroded as “greed spiraled out of control.” As one might expect, there were those who found ways during the Revolution to profit from the privations of others as a way to quick wealth. The result was for communities to define a “moral economy” and demonize speculators who violated commercial dealings. To restore the normal order it was not uncommon then to bestow discretionary power—that is, extralegal authority—to those standing committees. The purpose was not to deny the logic of capitalism but to determine a reasonable profit that would reflect competing sources of supply and demand.

Ordinary people, therefore, sustained the revolution in small communities throughout the colonies largely through their cultures and the committee system. The people did not become slaves of tyrannical masters; and if there are examples that emerged when excessive liberty invited anarchy and licentiousness, those ordinary people acted with prudence to maintain community solidarity, balancing order and freedom. “The participation of so many new men in public life,” Professor Breen concludes, “transformed theoretical arguments for a government based on the will of people into revolutionary reality.”