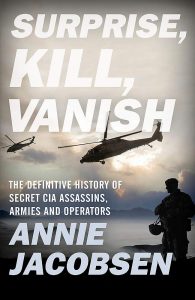 Is lethal covert action compatible with American democracy? President-mandated covert action against America’s enemies challenges our national ideals and sense of righteousness. Critics contend there can never be effective oversight, and that covert action against foreign targets is often ineffective, if not downright immoral. Perhaps. Far easier it is for individuals to be ethical than for superpowers. Can a great nation with global interests such as the United States simply forego using lethal covert action against violent threats after diplomacy has failed and outright war is inappropriate? The exigencies of the international order sometimes demand another way.

Title 50 of the U.S. Code gives the Central Intelligence Agency authority to engage in covert action on the president’s orders. A signed Memorandum of Notification, or “Presidential Finding,” unleashes this special power. In the past, these special activities received little or no Congressional oversight or public scrutiny. They occurred under cover in “denied areas,” and were conducted to ensure “plausible deniability” to the chief executive. But while this lethal action, the president’s hidden hand, may be underhanded and unethical, it is completely legal.

In her fast-paced and highly detailed Surprise, Kill, Vanish, veteran intelligence journalist Annie Jacobsen tells the story of how extraordinary American special operators have carried out lethal covert acts against America’s enemies at the president’s behest. Jacobsen occasionally reproaches these activities, suggesting they violate just war precepts, basic morality, or sometimes even common sense, but she mainly allows the reader the ultimate verdict on whether they were right or not.

Surprise, Kill, Vanish features the career of remarkable operators such as Felix Rodriguez, the Cuban immigrant who hunted the revolutionary Che Guevara in the Bolivian highlands in 1967, taking the dead Che’s Rolex as a souvenir, and Billy Waugh, who started his career as an infantryman in Korea and continued in Vietnam as a Special Operations Group officer in 1967 attempting to assassinate North Vietnamese General Nguyen Giap.

Waugh participated in an amazing variety of actions. He later worked as a covert CIA operative instrumental in capturing the infamous terrorist “Carlos the Jackal” and allegedly cooked up a plan to kill Osama Bin Laden, whom he was tracking in Khartoum in the 1990s. Even in his seventies, Billy Waugh hunted terrorists with the CIA’s Special Activities Division in Afghanistan after 9/11.

Waugh’s long career threads through all key phases of America’s covert activities since World War II. The first period of covert action unbound featured Allen Dulles’s CIA boldly carrying out presidential direction, fomenting coups in Guatemala and Iran, plotting assassinations of Caribbean dictators like Fidel Castro and Rafael Trujillo, and even assisting the overthrow of our ally, South Vietnamese President Ngo Dinh Diem. The scorecard on these activities is, to put it kindly, mixed.

This freewheeling era ended with defeat in Vietnam and Watergate. In the second phase, investigations of CIA activities in 1975, with the Church and Pike Committee hearings and the CIA’s confessorial “Family Jewels” memo, led to Congressional oversight and severe restrictions on covert activities, as well as the Carter administration’s gutting the CIA’s capacity to wage covert war. President Reagan’s Executive Order 12333, which extended the powers of U.S. intelligence agencies, further restrained covert action by prohibiting assassinations.

Despite the post–Church Committee revulsion toward covert action, threats to U.S. interests didn’t diminish in the 1980s, and the need for more vigorous special activities became apparent. The Reagan administration started laying the groundwork for the U.S. covert action capabilities. The third phase of covert action would begin when 9/11 and the war on terror gave these special activities their clearest agenda and arguably their greatest, or at least more acceptable, accomplishments.

An unlikely hero of Jacobsen’s book is CIA director William Casey, the OSS veteran who once contrived a plot to assassinate Hitler. Casey believed the world was a dangerous place, and the CIA must never appear weak. He decried Executive Order 12333’s strict but vague prohibition on assassinations, believing this gave the world’s bad actors freedom from retaliation. With a strong sense of mission, Casey rebuilt the agency’s covert operations capacity and established the Counterterrorist Center, which would later develop the sophisticated MQ-1 Predator drone. Casey’s important rebuild bore fruit years later in 2001 when CIA’s Special Activities Division hunted Osama Bin Laden and overthrew the Taliban government in Afghanistan in a matter of weeks.

Jacobsen may hold some qualms about covert action, but her narrative reveals that failure to employ the hidden hand can embolden our enemies. In 1973 the Nixon administration ignored Yasser Arafat’s Black September after the murder of our ambassador in Sudan. In 1983, Hezbollah in Lebanon destroyed our embassy in Beirut and later murdered 241 barracked Marines, sailors, and soldiers with a truck bomb.

Another telling example is when President Reagan rejected a direct assassination attempt on Libya’s leader Muammar Qaddafi, who sponsored terrorism throughout the Middle East and Europe. After U.S. intelligence in 1986 verified Libyan responsibility in a bloody Berlin nightclub bombing, Reagan ordered Qaddafi’s home and military targets bombed, killing many but missing Qaddafi. Reagan justified the act publicly under Article 51 of the UN Charter. But Jacobsen quotes CIA agent Dewey Clarridge, one of the founders of the Counterterrorist Center, who asked “why is an expensive military raid with heavy collateral damage … more morally acceptable than a bullet in the head?” In 1988, still undeterred, Qaddafi ordered the destruction of the Pam Am Flight 103 over Lockerbie, Scotland.

Like Reagan, President Clinton also shied from covert action, with tragic results. He refused to take a chance to kill Osama Bin Laden, who in the late 1990s was known to be responsible for 1998 dual embassy bombings in Nairobi and Dar al Salaam. Clinton’s cruise missile attacks against Al Qaeda encampments deterred nothing, and in 2000 he shunned retaliation after Al Qaeda nearly sunk the U.S.S. Cole. The 9/11 attacks occurred eight months after Clinton left office.

President Obama later stepped up lethal direct action to clear his “capture-or-kill” list. Under CIA authority and presidential orders, a Navy SEAL detachment killed Osama Bin Laden in 2012. The U.S. government drone program, conceived in the 1980s for high-level surveillance and pinpoint strikes, killed thousands of terrorists under his direct orders. As Jacobsen reports, covert action became routinized, bureaucratized, and even “normalized.” But Al Qaeda and its deadly offspring have been effectively destroyed.

Under the conservative Bush and the liberal Obama, the President’s hidden hand achieved a new efficiency and respectability. Perhaps the American democracy has, after all, become reconciled to covert action’s necessity, or inevitability. Jacobsen’s impressive Surprise, Kill, Vanish makes a strong case that this form of lethal action now occupies a permanent place in the new way of war.

Michael J. Ard is Program Director for Intelligence Studies at American Public University System and also teaches international security in Rice University’s Master of Global Affairs program. He served as Deputy National Intelligence Officer for the Western Hemisphere from 2008 to 2012.