The Quality of Objects 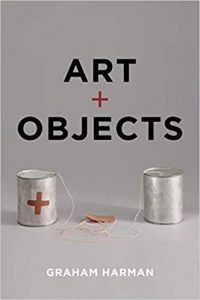 One of the most dreadful afflictions of our time is not being able to tell where things begin or end. Or if they have an autonomous “self” at all. You can see this disorder play out most clearly in art. Is the identity of a painting completely exhausted by its political implications or social effects? Or, moving in the opposite direction, does the value of the work lie solely in the components that make it up: paint, canvas, wood? Or is there a painting “beyond” these things, however remote or hidden within the recesses of its sensual attributes?

To say that a real painting, but one to which we only ever have partial access, does indeed exist is to court both formalism and phenomenology in one fell swoop. Very uncool. It’s also to make allies with Aristotle, who said in his Metaphysics that individual objects cannot ever be thoroughly and exhaustively defined since things are “concrete while definitions are made of universals,” as philosopher Graham Harman summarizes in Object-Oriented Ontology: A New Theory of Everything. If you’re trying to build an academic career in philosophy, it’s much safer to say that everything is relational, an infinite refraction where even the mirrors themselves are reflections. It’s very trendy to jump into metaphysical sandpits. It’s easy, too.

Speaking of metaphysical sandpits, there’s a cat on the Columbia University campus. Well, a statue of a cat, but still. Being bronze and roughly the size of an actual cat, it’s chained to a fence to keep it from being stolen. The late philosopher Arthur Danto suggested that he is open to considering the cat’s chain as a part of the artwork, but then by what principle do we stop the web of associations? Danto wrote that “the moment we allow [the iron railing] to become a part of the work, where does … the work end? It becomes a kind of metaphysical sandpit, swallowing the universe down into itself.” And as Harman elaborates in his latest work, Art and Objects,

Of course, we as artists or beholders may decide not to stop at the cat, the chain, or the railing, and expand the artwork instead to include the room, the building, the whole Columbia campus, the entire neighborhood of Morningside Heights, all of Manhattan, or some even wider aesthetic field. But we will always come to a stop somewhere, and that somewhere will be the outer wall of our increasingly complex autonomous object. The only way to circumvent this is to remove art from the realm of aesthetics altogether and make it the mere correlate of an act of declaring that something is art, as some post-1960’s theorists have in fact held.

And this really gets to the gist of what Harman’s Art and Objects is really about. It’s a book about art, yes, but it’s more about the category of art. Or, really, how we might be able to discern what art is and how it exists in the world. And like every Harman book (and the man is prolific), Art and Objects also serves a dual purpose as a primer for Object-Oriented Ontology, or OOO (pronounced “triple O”). The name of this relatively new field of speculation might sound intimidating or abstract, but it’s really less jargon-laden and more useful for navigating human life and thought than other contemporary fields. On top of which, Harman is a wonderful writer. He’s accessible and lively, a real joy to read. After sitting down with a few of his books, it doesn’t really come as a shock that he had a previous career as a sports writer. He isn’t trying to intimidate or impress peers. He’s trying to initiate newcomers.

You might already have a good idea of what OOO is all about from the examples I’ve given. Drawing from Kant and Heidegger, OOO recognizes the radical autonomy of objects as noumena that exist independently of human thought and aren’t exhausted by their relationships with other objects. What this essentially means is that the tree outside of my window consists of more than what I can see, feel, and smell of it (my perceptions of the tree), and how the tree might be put to my own practical use. And really, this is how we tend to define most things when we’re asked: describing their appearances or describing their uses. And while these might be attributes of the tree as a Real Object (or RO), as Harman calls it, the Sensual Qualities (SQ) perceived physically or Real Qualities (RQ) intuited intellectually exist within tension of the RO and each other. It might be easier to understand this using the example of a human being—that the social scrim through which we engage with others simultaneously manifests and hides our real selves. But, since OOO considers itself anti-anthropocentric, I thought the example of a tree might work better.

Harman claims that the bedrock of OOO, and indeed of all philosophy, is aesthetic. That’s why a book directly addressing issues of art and art criticism is so fundamental to the OOO project. As he writes in a preliminary note in Art and Objects, what Harman means by aesthetics is “namely, the study of the surprisingly loose relationship between objects and their own qualities.… By art I mean the construction of entities or situations reliably equipped to produce beauty, meaning an explicit tension between hidden real objects and their palpable sensual qualities.”

This tension arises from the fundamental autonomy of objects. I’m reminded of the Simone Weil quote about an ugly girl looking in the mirror and realizing instantly that she’s more than she sees. Or the Pound quote that nothing suggests itself. Objects, according to OOO, are always “absent,” and we approach them only obliquely and with the knowledge of the tension that arises between them and their qualities. So what Harman’s latest book is, in fact, is a premodern (his phrase, via Bruno Latour) reclamation of aesthetic formalism. It’s an argument that art exists and engages in relationships with other objects, but that what makes those relationships possible is the fundamental autonomy of the art itself.

Like most Harman books, the first few chapters are dedicated to re-explaining what OOO is, and how aesthetics (and metaphor) are fundamental to it. After lucidly plowing through Kantian and Hediggerian notions of autonomy and hidden objecthood, Harman then pivots to two twentieth century formalist art critics who might bristle at the title. Much of the book is taken up with Michael Fried’s ideas of theatricality versus absorption in painting, or the idea that contemporary painting is too outward facing rather than absorbed in its own activity. Harman, as he does with most enemies and allies alike, both agrees and disagrees with Fried. Arguing that Fried should perhaps replace the term “theatricality” with “literalness,” Harman argues that what actually happens when a person successfully engages with art, is that the Real Object self of the person steps in to sort of imaginatively perform the hidden Real Object of the artwork.

There’s a similar agreement/disagreement sketched out between Harman and Clement Greenberg, probably the most despised art critic of the recent past. Whereas Greenberg focused on the idea of the flatness of the canvas, and of lauding work that was created with an awareness of its medium, Harman points out that Greenberg (and Heidegger, no less), “not only oppose a deep medium to a superficial content, but further assume that this deep medium is a One, making all multiplicity automatically shallow by contrast.” For Heidegger, of course, subsuming individual expressions of being to a devotion to an unfragmented single unity of Being took had somewhat darker results than Greenberg’s work.

There are of course critiques to be made of OOO, but the movement’s rejuvenation of a kind of neo-Kantian formalism and fight against literalism is laudable. T. S. Eliot once wrote in a little book on Dante that to use contemporary politics as your Virgil through the works of literature was to, implicitly if not explicitly, hold the position that art in itself doesn’t actually exist. To think that a political reading of any great work of art exhausts the value and meaning of that work is to court literalism, OOO’s enemy and art’s enemy as well. Harman writes that “the fight against the literal always requires an element of depth, villainous though depth may sound to Derrideans, Foucauldians, and Lacanians. But OOO also argues—against Greenberg and Heidegger—for a fragmented depth, so that the medium of the artwork is not found in the unified canvas, but in each and every element of the work, some of them left in suppressed literal form while others are freed up by way of the object-quality tension we call beauty.”

There are faults in any and every philosophical system, but one that defends depth and searches for beauty is certainly worth paying attention to.