The Quest for Neutral Ground 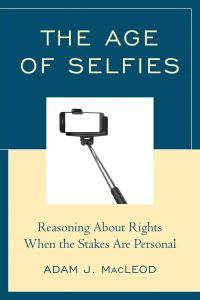 The Age of Selfies: Reasoning About Rights When the Stakes Are Personal
by Adam J. MacLeod.
Rowman & Littlefield, 2020.
Paper, 141 pgs, $25.

Salma Hayek makes headlines each time she posts a selfie on Instagram. I know this because years ago I set a “Google alert” for the name “Hayek” so that I wouldn’t miss new articles about the great economist and legal theorist Friedrich Hayek. Now, for better or worse, Salma Hayek updates from around the Internet appear in my inbox every morning. We truly live in the Age of Selfies.

That’s the title of the latest book by my colleague, Adam MacLeod, a professor of law at Faulkner University Thomas Goode Jones School of Law in Montgomery, Alabama. The Age of Selfies is a quick read with a straightforward argument about the importance of reasonable, principled disagreement to our civic discourse, institutions, and education. Underlying our passionate disagreements about fundamental principles, MacLeod suggests, is an abiding agreement about the reality of right and wrong, good and bad, truth and error. We quarrel over political issues, he claims, because we hold sincere beliefs about what is or is not moral, presupposing that morality is not only existent but knowable. Most of us, anyway, reject nihilism. Effective, constructive disagreement is, therefore, possible among those who realize this central commonality that holds together otherwise incompatible convictions.

“That many of us speak and act as if moral and political questions have right and wrong answers,” says MacLeod, “indicates that, for all of our fractious disagreement, a consensus is emerging that there is moral truth—right and wrong—about questions that occupy our public discourse.” You would be correct if you guessed that the New Natural Law (an Aristotelian-Thomistic approach to jurisprudence popularized by John Finnis and Robert P. George) rests beneath the surface of this seeming optimism. To oversimplify, the new natural lawyers exposit that practical reasoning enables us to recognize and pursue ends that are intrinsically good and desirable, and that, moreover, fulfill our rational nature as human beings (“every person you encounter,” explains MacLeod, “is an agent of reason and reasoned choice”). It is only a small step, from there, to propose that sensible human beings of good faith can reason together to achieve workable peace and productive civility regarding even controversial matters involving, say, marriage or abortion.

Are the new natural lawyers correct about human nature? Is the human capacity for reason overstated? Do the horrors of the French Revolution caution against the Cult of Reason? What if David Hume was right that reason is the slave of the passions? What if the mind is inherently limited, its memory only partial and selective and its understanding of truth necessarily circumscribed? What if we see only through a glass darkly even if we follow the light of the world? What if many philosophical positions are merely pre-textual rather than genuine? What if they are expounded solely and perversely for political power or personal gain? What if their very terms reject compromise, dissent, or negotiation? What if most people are unreasonable and irrational, motivated more by passion and emotion than by logic and good sense? What if the ordinary response to conflict is anger and outrage rather than patient contemplation? What if hubris is more common than humility? I don’t know the answers to these questions, but, whatever they are, they could diminish the force of MacLeod’s arguments.

Yet they are great and hopeful arguments, predicated against the fashionable notion that what “we” are is simply “a collection of selfies, which are carefully crafted, externally projected images of individual self-constitution.” A person identifies himself or herself—or itself or they or whatever—with community brands (and the concepts they entail) without subscribing or adhering to the principles, doctrines, or teachings that define and govern that community. So, for instance, one can, today, identify as both a Muslim and a Christian even if those two religions are by their own tenets mutually exclusive. Who are we, the naysayers, to criticize this apparent contradiction if it feels authentic to the person professing it?

When people argue over the meaning of a guiding externality—a religious text, a statute, the language of a constitution, a novel—their interpretive differences are rooted in a common source (the document under consideration). MacLeod calls this common source a “neutral ground.” In a sense, MacLeod’s book is, more or less, an attempt to supply “neutral ground” where it is currently lacking, pointing out where people of differing viewpoints agree about the primacy and reality of morality itself.

When people argue, however, over internalities—that is, purely subjective preferences, emotions, or feelings—there is no common source, no independently measurable basis for assessing the validity or invalidity of the views a person embraces. The fact that a person holds them is supposed to suffice by itself. “The fundamental problem is that, on the whole,” MacLeod submits, “young people have made their moral reasoning thoroughly personal.” Accordingly, “[w]hat matters most to them—the only thing that matters to some of them—is that they are true to themselves.”

The ultimate wrong, according to someone who thinks along these lines, is to be judgmental or discriminating or otherwise unaccepting of the allegedly authentic identity of another. The supposedly non-judgmental person nevertheless believes that some actions are not okay, are out of bounds, or, to employ moral vocabulary, wrong. To condemn a person as judgmental is, after all, to express a judgment, to call someone else wrong. Relativism isn’t at play. To deem someone else’s judgment wrong is to suggest that a different judgment is right.

What is to be done about this muddle? This question is a variation on what MacLeod dubs “The Practical Question”: “What shall I do?” Every thinking human being must ask The Practical Question to act to fulfill an objective. For starters, we can stop treating the past as a monolithic category of horrible wrongs and mine it for the good, the beautiful, and the useful. Rather than dismissing all history outright, wrestle with it, search out examples and analyze tensions and contradictions. For an audience of teachers and students, this means working through disagreement and accommodating diverse viewpoints for the sake of clarity and understanding—not because each view is equally strong or valid but because the test of its strength or validity depends upon its being studied, weighed, and refuted.

The nature of rights and duties, the meaning and idea of truth, the concept of sin, the power of indifference—these and other subjects prompt MacLeod into showing that dialogue and conversation break down when, instead of enumerating reasons and arguments in favor of some belief, an adherent simply cites internal preferences as a sort of trump card to end debate. He celebrates private ordering and pluralism as key to self-governance and community harmony absent unwarranted state coercion or government compulsion. “We can,” he avers, “lower the stakes of our public controversies, lower the temperature of our civic discourse, and avoid zero-sum contests over totalizing plans of action if we will simply allow the plural domains of society to do their work.” Such diversity recalls the Catholic doctrine of subsidiarity.

MacLeod’s urgent refrain-of-musts will echo in the thoughts and prayers of sensitive, conscientious readers: “If we are going to get anywhere in our discourse, then we must move beyond stereotypes and personal attacks. We must stop attributing to each other the worst motivations. We must instead seek to understand the reasonable, even admirable, motivations of people with whom we disagree.” This seems, and, I daresay, feels right.

And who knows? Maybe Salma Hayek, browsing her daily Google alerts, will discover her name in this very review, read The Age of Selfies, and then use her celebrity to promote practical reasoning about fundamental rights. A man can dream anyway.

Allen Mendenhall is associate dean at Faulkner University Thomas Goode Jones School of Law and executive director of the Blackstone & Burke Center for Law & Liberty. Visit his website at AllenMendenhall.com.