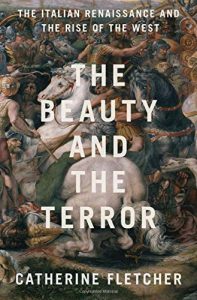 The Beauty and the Terror: The Italian Renaissance and the Rise of the West
by Catherine Fletcher.
Oxford University Press, 2020.
Hardcover, 384 pages, $30.

Not all that long ago, the Renaissance was common cultural terrain in American life. Familiarity with the works of Michelangelo, Titian, and Leonardo was an inheritance shared by college graduates as well as the more modestly educated. The reawakening and reimagining of classical painting, sculpture, poetry, architecture, and prose in the fifteenth and sixteenth centuries formed the core of a well-articulated canon of cultural achievement and aspiration distinct to the West. It also served as the sacred landscape for Roman Catholics and, to a lesser extent, the mainline Protestant churches. For millions of parishioners, many of whom had only recently arrived in America, the most visible manifestations of their faith were the renderings of Renaissance art that adorned their cathedrals and their homes.

The Renaissance was commonplace enough to serve as ready-made popular culture. Irving Stone’s excellent 1961 historical novel The Agony and the Ecstasy: the Biographical Novel of Michelangelo, which was rendered in visually stunning fashion in the 1965 film of the same name featuring Charlton Heston and Rex Harrison, found a mass readership and viewership. Twentieth Century Fox scored a major studio hit with a film that was essentially a guided tour of the Sistine Chapel.

That cultural moment, when a broad aesthetic consensus could form around familiar and substantive works of arts and letters, seems to have passed. The unmaking of the canon and the traditional liberal arts curriculum by the mandarins of Cultural Marxism and the secularization, or, to be more accurate, profaning, of everyday life have made our distance from the Renaissance seem ever greater. A few years back, when the Renaissance-set television series The Borgias enjoyed a brief vogue, several students asked me if it was a true story.

There is no reason for despair though. The Renaissance has been reimagined and reawakened in Catherine Fletcher’s fantastic new history of the era, The Beauty and the Terror, a work whose title is an homage to Stone’s novel and will hopefully reach as large an audience as that now sixty-year-old work. Like Stone, she recognizes the degree to which the muses of the masters were shaped by the tumultuous times in which they lived. In this thoroughly engaging account of the era, Fletcher demonstrates her erudition while deploying the skills of a contemporary scholar. Though an evident admirer of the works described in the book, she is attune to the warts of their makers and the fraught context in which they were created. Fletcher renders the time and place with simultaneous complexity and legibility.

Fletcher argues, like many historians before her, that the Renaissance was more than just a moment of cultural reawakening. The brutality of the age, which was pronounced but in no way an outlier in human history, played a profound role in shaping the kind of artistic expressions that emerged from it. Wars within and among the Italian city-states, papal intrigue, and the ongoing threats to Christendom from Ottoman expansion proved to be “a melting pot for ideas about politics and culture,” Fletcher argues persuasively. The very institutions that patronized the arts and letters of the age were often the domain of conspiracy, slave trading, and mass slaughter. The varieties of human cruelty described in the book range from the callous to the deeply personal. While Renaissance masterpieces valorized and illuminated the human form, the creators and consumers of these works were far from the children of the Enlightenment.

Within The Beauty and the Terror, Fletcher does a marvelous job juxtaposing old-fashioned appreciation with the complex legacies that form the context of many of these pieces. While ruminating on the mysteries of Leonardo da Vinci’s Mona Lisa, Fletcher situates the painting within the personal history of its subject, the wife of a slave trading merchant named Francesco del Giocando. The Florentine merchant’s ability to become a cultural patron was built in part on human bondage. “This later Renaissance art was entangled not only with war, but with colonialism, and these wide phenomena did not only affect the cultural world, but Italian society as a whole,” Fletcher explains.

Few historians write with the agility of Fletcher. She ventures from the canvases of Raphael to the backrooms of the Borgias to the roiling Mediterranean of the Battle of Lepanto while never losing sight of her story. The shift from political to social to cultural matters never feels forced or ham-fisted in The Beauty and the Terror. Though the author, who characterizes the Western Civilization survey course as a mere social construction, may bristle at the suggestion, this book will make a fantastic addition to the syllabus of just such a course. It will also work well in any college history course on early modern Europe. The Beauty and the Terror is a grand scholarly accomplishment, one which can and, I hope, will find a large reading public.

Clayton Trutor holds a PhD in History from Boston College and teaches at Norwich University in Northfield, Vermont. He’d love to hear from you on Twitter: @ClaytonTrutor