The Revolution is Still Permanent 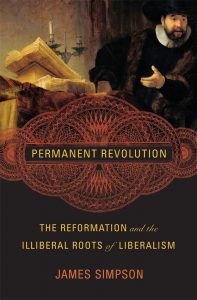 For those who can competently read it’s a regrettable feature of life that the interpolation of the word academic between good and prose generally negates the two. “Good academic prose” at best describes a sort of Masonic handshake, which in a mostly unobtrusive manner announces belonging to an elect society. At worst it’s simply a misnomer, a perverse revel in the English language’s capacity for abuse. Fortunately, there are academics who write good prose, conventions be damned. But it’s usually a mixed bag, even with the good ones.

James Simpson is a professor of English at Harvard and has devoted his life to studying some of the language’s greatest and foundational stylists. I hope it still hurts him to cramp his own writing to the dreary lecturing mode of contemporary academic custom; it certainly hurts reading his insightful—I’m recommending it—Permanent Revolution: The Reformation and the Illiberal Roots of Liberalism. The hardback thuds in at more than four hundred pages when counting endnotes, but one might, burning away paragraphs on paragraphs of “I will/have argue/d/examine/d/assess/ed this,” trim away nearly one hundred of that. It sags. Each elegant turn of phrase and playful sentence, and there are more than a few, makes the stilted outlining hedging it about all the more suffocating. But despite that, Permanent Revolution may, to be personal for a moment, have prompted or rekindled a religious crisis in my life. And, more relevant here, it is a proof text for the fundamental illiberal observation that politics and religion can’t ever really be separated, even if that was not quite Simpson’s intent. Which is to say, it has vitality despite its good academic prose. In Simpson’s own words:

Permanent Revolution, then, addresses the competing claimants to Anglo-American (and global) modernity (i.e. evangelical religion and the Enlightenment), and poses the following questions with regard to the British Reformations: (i) how did we get from the first, illiberal Reformation to the Protestant proto-Enlightenment?; and (ii) why did we need to?

The logic of permanent revolution Simpson describes—hoping to put Whig history fully to rest by complicating accounts of the Protestantism that led to modern liberalism—is an ever-turning wheel of purification, momentary stasis, and reaction. That means the inverse of his title is true, too, and illiberalism can have “liberal” roots. So it’s no wonder that along with an uncomfortable number of other truths about political power in a post-Reformation, post-Hobbes world, Carl Schmitt, the Nazi jurist, saw the core apprehension of Simpson’s book well before him. As an illustration of the essence of Schmitt’s revival of political theology, Permanent Revolution is just about perfect.

All significant concepts of the modern theory of the state are secularized theological concepts not only because of their historical development—in which they were transferred from theology to the theory of the state, whereby, for example, the omnipotent God became the omnipotent lawgiver—but also because of their systematic structure, the recognition of which is necessary for a sociological consideration of these concepts. The exception in jurisprudence is analogous to the miracle in theology. [Carl Schmitt. Political Theology: Four Chapters On the Concept of Sovereignty. Chicago: University of Chicago Press, 2005.]

That is an apocalyptic utterance, in its own good academic prose, unveiling the religious nature of man that modernity works so hard to keep covered by politics. What Simpson does by accident—he’s a scholar of literature not political theory, and a liberal, so Schmitt gets no mention—is to illustrate not just the first claim, that of historical development, but also the second: that there is a systematic structure of thought created by theological concepts that cannot help but in turn create conscious or unconscious analogies, imprinting those on society and the state. Politics is necessarily imbued with religious significance. To deny the theological is to make a theological claim.

Protestantism’s individualism, authenticity, and interiority before the face of a God whose justice and power is totally alien to mankind in its misery formed new and peculiar personalities, engaging with the state and society in novel ways. This rupture happened in the lives of individuals; it is only centuries later that we can see commonalities and categorize puritans and absolutists and proto-liberals and all the rest. Permanent Revolution is Simpson’s study of the poets of the Reformation in England, their dramas in both life and letters, and the psychological responses to the upheavals that exiled Catholicism and established Calvin’s thought in that teeming womb of royal kings. That blessed plot brought forth, yes, Shakespeare, but also Milton, and Bunyan, and many besides, and it is in their biographies and work that the quirks of what became liberal modernity find first and, maybe, best expression, as responses to the inner agonies of religious faith.

What Simpson sees is that evangelical religion—for that is the mantle claimed by Reformers from Luther on—lay the groundwork for habits of mind and conviction we take for granted in the here and now. To have been forever in fear of falling into the abyss between the omnipotence and righteousness of God and your own wretched powerlessness today “produces the relentless search for, and affirmation of, agency and its partner individuality, in contemporary liberal culture. In horrified recoil from divine election, we seek out our own unmediated elections in the most minute agential interstices of our experiences.” And “Indeed, the freedom to read and interpret remains close to the doctrine of ‘salvation’ for secular liberalism (precisely given its Reformation genealogy).” In those and numerous other passages Simpson traces the parallels between the theological beliefs of our, Anglo-American moderns, intellectual ancestors and the essential features of our modernity.

Twice his reading flashed in my mind like lightning on a clear day, stunning and unlooked for. First, his reflections on evangelical/liberal authenticity and hypocrisy: “For contemporary liberals, perhaps the greatest gain of the Reformation is precisely the growth of individuality and interiority, seen as signs of authentic agency.” But that self-reflexivity in pursuit of purity drives the scrupulous to despair and the less-scrupulous to purges, for whether within or without, “Hypocrisy eradication is the essential activity of the evangelical.” It is in Shakespeare and Locke, Simpson argues, that we see sophisticated attempts to recreate the space for roleplay and privacy necessary for life in society, lost in the insights of Luther. But they are only attempts, for the revolution is permanent.

Second, and related to that shrinking of roles into a singular individual personality, Simpson highlights the consolidation of various syntactically plural concepts into singularities, particularly and most importantly, the transformation of the many liberties of distributed medieval life into capitalized Liberty. While there is a classical philosophical precedent, and the theological precedent of Paul’s epistles, both of those fit as well into the idea of liberties being connected to responsibilities and relationships: liberty in the polis from slavery, or in Christ from the world, flesh, devil, and law of sin and death. Neither needed be singular until applied to a naked soul, alone before God.

The essence of my argument is that singular Liberty is a product of early modernity: it comes into re-existence as a response to the theological and political centralizations—singularizations, if you will—of early modernizing Europe. Above all, it comes into existence as the response to two distinctively early-modern neoclassical resurgences: those of political absolutism on the one hand, and of theological absolutism on the other.

An inverse to that, untouched by Simpson, is the multiplication of justices. From the Justice of the philosophers or the Justice of God, today justice invites adjectival modifications, such as social and economic. Much as liberties were plural in the multiplicity of roles a particular person played in the premodern, justice now is multiplied, as the singular individual requests the comprehensive state play more and more parts in the story of her life. The wheel revolves—liberal roots of illiberalism.

But Simpson won’t quite complete the circle. Despite the ways in which he seeks to subvert Whiggism by better embracing its first premise of liberalism’s Protestant ancestry, he won’t concede the thing may remain, in fact, fundamentally religious in its structure and demands on persons—that it may be a Protestant heresy. Summarizing the scope of his book, “We see that nascent Liberalism is itself one of the forms taken by Protestantism, as it repudiates prior forms of itself. As a form of modernization Liberalism is, however (unlike evangelical religion), a stabilizing form.” But as he is willing to admit of the patterns seen in a historical sola scriptura England, the forms that make up that supposedly stabilizing form are hardly in themselves stable. “Scripture alone is the arbiter of the present. Only elect members of the True Church are true readers of Scripture. In these two statements hang all the energy and all the violent fracture.”

If Schmitt is right, as Simpson’s historical and literary criticism seem to suggest, and Scripture may have some new conceptual form in Law, and God might now go by the name Liberty, and a true church must be somewhere, then that is a recipe for fracture that still cooks. So it sounds like fearful self-assurance—similar to the pleading poetic exercises of the would-be elect Simpson studies, like John Donne insisting at his own salvation in the face of despair—when the confessed liberal confesses, protests, that “Liberalism is a second-order belief system, a tool for managing first-order belief systems.” Is it?

Simpson would like to say that modern evangelicalism is the only heir to the early English Reformation’s illiberal and militant religiosity. But he is forced to concede the possibility of damnation. He writes:

Liberalism, that is, carries the DNA of a crushing revolutionary movement within itself. Contemporary Liberalism looks especially unpersuasive when it mimics, as it not infrequently does, the intolerant, exclusivist, identitarian politics characteristic of the non-democratic, anti-meritocratic, virtue-parading, evangelical True Church. When liberals act like the elect, they betray their tradition.

Do they? Christianity and Marxism are full “first-order” worldviews, sure. So is Islam. So are other things. They have things to say about the self, the soul, this life, and the next. They organize individuals, society, the entire world. But mightn’t liberalism do much the same, in its own less-articulate ways? Simpson has seen the complaints of its “hollow” nature. He likes it that way. There is not supposed to be a creed or catechism; there’s just supposed to be whatever this is, all the Sunday school you need, in good academic prose:

All the liberal within a given constitutionalist democracy need commit to, as a liberal, is the following: pressure to ensure that the constitution answers to its mediating responsibilities; defense and promotion of division of powers, separation of church and state, equality before the law, toleration of minorities, freedom of association, respect for liberty and privacy of conscience, artistic liberties, and liberty of textual interpretation; and, of course, acceptance of the democratic judgment of the majority.

Micah Meadowcroft is associate editor of the Washington Free Beacon. He regrets to inform you he can be found on Twitter at @micaheadowcroft