The Rise of the State, the End of Enlightenment 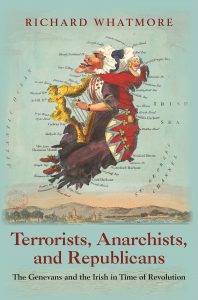 Terrorists, Anarchists, and Republicans: The Genevans and the Irish in Time of Revolution
By Richard Whatmore.
Princeton University Press, 2019.
Hardcover, 512 pages, $37.52.

We often consider the Treaty of Westphalia the beginning of the modern nation-state. Those who understand the nuances of history and the reality human nature know, however, that a legal treaty does not instantaneously spark a shift in a man’s understanding of his community; nor does it change his conception of the culture or society to which he belongs. The development of nation-states in Europe is haunted by the arbitrary borders that were drawn around various regions. Traces of these tensions remain scattered throughout these locations. Think, for example, of the cultural tensions in cities like Belfast, Berlin (during its Cold War divisions), and Brittany; peripheric regions such as Alsace-Lorraine; and nations whose borders and statuses as nations have been gradually readjusted, such as Poland, Corsica, and the Balkan countries.

While 1648 may be the formalized birthday of the nation-state, Richard Whatmore’s recent book, Terrorists, Anarchists, and Republicans: The Genevans and the Irish in Time of Revolution demonstrates that tensions with this new political organization lasted a century after the Westphalian Peace. By way of archival analysis, the intellectual historian from the University of St. Andrews paints a new picture over the narrative that nation-states were the beginning of democracy, making a compelling argument to the contrary: By the end of the eighteenth century, nation-states became another iteration of empire, driven by a desire for power and wealth, that ended up overwhelming and eventually crushing small states that were aiming to partake in the Enlightenment notion of liberal democracy; further, the political tensions that escalated during this time instigated a reemergence of religious persecution not seen since the Reformation.

Whatmore tells the story of two societies in Geneva and Ireland whose political divisions led to civil war. What was happening to many small states in Europe underscores the increasing prevalence of large states seeking empire and markets, which became the norm during the creation of modern Europe. These large states became more homogeneous, factitious, and ideologically divided, bringing smaller states into their control. Powerful states like Britain and France justified their intervention in the affairs of smaller, weaker countries on the grounds that they were stopping “anarchists” and “terrorists” from destroying society, religion, and government.

The fates of these two societies in Geneva and Ireland crossed at the end of the eighteenth century in the town of Waterford, Ireland, where a small Genevan community settled to create a colony known as New Geneva. Their common episode left behind a unique case study on themes such as the Enlightenment’s legacy, republicanism as an experimental form of government, and the rise of markets and economic empires. Waterford was inhabited by Irish Republicans who derived many of their political beliefs from the principles behind the French Revolution. Waterford was a utopian city, an Enlightenment experiment inspired by republican values and the spirit of liberty that was ultimately “extinguished by the might of empire” in 1798 at a site known as the Genevan Barracks in Waterford. The massacre at these barracks marked a tragic end to this experiment, and the historical significance of this little-known episode is what Whatmore considers to be the “end of Enlightenment” in many respects; that is, the “end to the old Europe of diverse political forms,” and “the ascendancy of powerful states seeking empire and markets.”

One of Whatmore’s claims from the outset of the book is that we can only understand what happened at New Geneva if we understand the relationship between these two small states, Geneva and Ireland, and their respective empires, France and Britain. Whatmore’s research is a favorable combination of traditional intellectual history that understands and explains the philosophical motivations during these times with a contextual research of the application of these ideas into the societies of those who read and interpreted Enlightenment thinkers.

The first two chapters outline the histories of these small states, their communities, and their tensions with these larger powers. He then discusses the history of Geneva, its controversies, and the story of New Geneva’s prison to explain why the Genevan Republicans created their community in Waterford in the first place. The following chapters move to Ireland, providing insight into the country’s situation in 1782 in order to depict “what the Genevans found when they arrived.” After explaining the historical background of both these places, the final part of the book discusses New Geneva’s failure as a republican community and its transformation into a prison for the Genevan Republicans whose dreams were ultimately shattered.

Several commonalities between these geographically distant societies have piqued the interest of historians of political thought. The political climate in Geneva and Ireland created internal factions with differing views on politics, religion, and economics. In Geneva and Ireland, those opposed to monarchy called themselves Republican: they believed in a tradition of small-state independence where the citizens of these states favored the public good over their own interests. In the late eighteenth century, these Republicans were as critical of democracy (direct, popular rule) as they were of monarchy. Interestingly enough, Republicans in Ireland and Geneva also called themselves Democrats after their belief that the people were a sovereign body separate from the government, but they also maintained that democracy needed “at all costs” to be distinguished from license. These “rebels,” as they were called, were willing to be martyrs for political and civil liberty. Whatmore argues that in the Irish case, the rebels even expressed early cosmopolitan notions of a future where societies could live without war, ranks, and even property; in the Genevan case, they proudly viewed themselves as the inheritors of Republican government, further inspired by Rousseau’s ideas (a fellow Genevan who gave up his citizenship).

A key part of Whatmore’s argument that the growth of empire marked the end of Enlightenment is featured in his substantial discussions on religious persecution. Whatmore explains how the justification of political massacre and extremism translated from religion to politics, and contemporaries recognized how “polarized camps were reintroducing species of enthusiasm into politics that recalled historic bloody battles between Protestants and Catholics.” One of the book’s strengths is how Whatmore contextualizes Geneva and Ireland’s social and political problems with the lingering religious tensions that the Reformation left behind.

For whom might this book be of interest? It is niche history, to be sure, but avid readers of intellectual history will appreciate Whatmore’s ability to connect a people’s lived experience with the religious and philosophical debates that we know about the eighteenth century. Whatmore takes a step beyond his expertise of the Enlightenment to demonstrate in what ways these ideas affected local societies and inspired small men to fight for their ideals. Whatmore’s book does not provide a typically chronological narration of historical events; instead, he moves “backwards and forwards” intentionally “because of the diversity of the cast, because of the cultural and physical distance between Geneva and Ireland, and because it was felt to be the only way of conveying the fullest possible sense of what happened at the end of the eighteenth century and why.”

Terrorists, Anarchists, and Republicans leaves readers with a lesson on the importance of local histories through their relation to our individual pursuits of liberty and the limitations of our efforts in the face of our governing entities that are driven by wealth and power. Empires have anything but ceased, after all. We can extend the implications of this episode in history to the ongoing conversations about globalization and transnational governance. A unique element of Whatmore’s book is how it manages to put the actions of small men in conversation with the larger philosophical and political themes that define our ages. As Whatmore writes, “the story of rebellion in Geneva and in Ireland involved a great many individuals, drawing in those who are well remembered historically and those who left the smallest of footprints.”

We can understand the nuances of our modern world and how it was created not only by studying broad, spanning histories, but also by uncovering the significance of our own, small footprints in their successes and, as was the case with New Geneva, their failures. Whatmore manages to trace these footprints and connect the local histories of places and people that might seem distant and unrelatable to our current political challenges, but the lessons from Geneva and Ireland’s tale speak to contemporary questions about the nature—and perhaps more importantly, the future—of self-governance and liberty. The epigraph to the book summarizes it best. Translated, it reads, “If God is no less admirable in the small works of nature, than in the great ones … he is no less [admirable] in the conduct of small States than in that of the great Kingdoms …”