The Soul of a Free Man 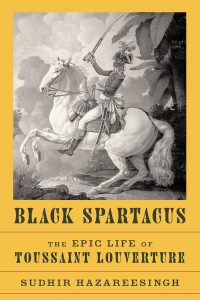 In the American Revolution, Enlightenment principles, natural rights, and the traditions of English liberty combined with the martial valor of the Continental Army to produce a new birth of freedom on this continent. It and the French Revolution went on to inspire similar uprisings throughout the New World, but often with less salutary results. In Black Spartacus: The Epic Life of Toussaint Louverture, British historian Sudhir Hazareesingh gives us a thorough and fascinating biography of the leaders of one of these, the revolution in Haiti.

Born in 1743 on a plantation Saint-Domingue (as Haiti was then known), Toussaint would later say that “I was born a slave, but nature gave me the soul of a free man.” After some early instruction by the Jesuits in Haiti, the rest of his education was self-taught. He was freed from slavery in about 1776 but continued to work on the plantation and grew to be a respected figure in the slave community there. As the Revolution in France spread to its Caribbean colonies, he naturally extended that leadership into the slaves’ fight for freedom.

Much of what followed is bound up in that phrase “the soul of a free man.” Toussaint—later known as Toussaint Breda or Toussaint Louverture (Hazareesingh refers to him simply as “Toussaint” throughout the book)—had more to say about the soul than most French Enlightenment figures. Perhaps because of the Jesuits’ insistence on preaching to and even educating the slaves in defiance of the law, Toussaint remained a devout Catholic throughout his life. At the same time, confusingly to non-Haitian readers, Hazareesingh notes that Toussaint was well aware of the syncretic African traditions in Haiti that became known as vodou. The extent to which Toussaint participated in vodou ceremonies is unclear, but it was certainly a part of the milieu of his homeland.

A contradiction? Perhaps, but if so it is one that Haitians accepted. It testifies to the massive changes and combinations taking place that land. Many of Toussaint’s fellow slaves—including his parents—were born and raised in Africa and followed the traditional religions of their tribes there. Kidnapped and thrown into a new land being shaped by Catholic colonizers, they combined their beliefs with those of slaves from other tribes. Coming from a polytheistic background, it must not have seemed out of place to add a few more deities to the collection, even if one of those was a God who expressly prohibited such combinations. By the time the next generation was born, seeing vodou and Christ both at work in the people’s minds must have been as commonplace as hearing French mixed with Adja, Gbe, and other African languages in the people’s ears. A new culture was being formed.

The spirit of the Enlightenment arrived later and it, too, could be at odds with Christianity. In France during the Revolution, this was certainly the case; the new government was notoriously hostile to the Church and the faithful. But Toussaint’s experience of Catholicism was liberating and levelling. In France, bishops may have lived in splendor that rivalled the nobility, but in Saint-Domingue, the priests moved among the people and uplifted them through education and evangelization. The universal liberty of the Revolution aligned perfectly with the message of universal access to salvation preached by the Church.

In Toussaint, the two forces combined into a uniquely Haitian interpretation of the Revolution. That combination of Christ and liberty is more familiar to Americans than Europeans, because the American Revolution was built upon similar foundations. For American readers, descriptions of Toussaint during the uprising are bound to provoke comparisons to George Washington. Like Washington, Toussaint’s personal virtue and sense of honor elevated him to a status as more than just a man. Hazareesingh writes that these qualities “gave him a quasi-mystical aura among his men, many of whom regarded their commander as a divinity.”

That aura went a long way in inspiring the soldiers to win their freedom against daunting odds. They fought first against the French for freedom and then, having successfully pressed their demands, fought alongside the French against the European powers seeking to turn back the Revolution. In each case, Toussaint’s army was poorer and more untrained than the enemy, but inspired by his nearly super-human efforts, they persevered and triumphed.

Toussaint was also astute at political maneuvering and soon made himself the preeminent power on the island. His strength came not only from his leadership of the army or the sincere devotion of its soldiers. Hazareesingh argues that Toussaint’s strategy “was to co-opt various territorial groups and at the same time draw on existing social and political institutions.” While Jacobins in France were bent on tearing down everything, Toussaint’s mission was more akin to the American project of preserving what was good, reforming what was bad, and broadening access to the blessings of liberty to those once excluded from them. As an ex-slave and staunch abolitionist, he naturally took that experiment farther and faster than the Americans did.

Given the power to draft Haiti’s constitution in 1801, Toussaint tried to realize a vision of what Hazareesingh calls “a creole republicanism.” That document declares firmly that “There cannot exist slaves on this territory, servitude is therein forever abolished. All men are born, live, and die free and French.” But in contrast to more radical rebels, Toussaint did not wish to expel the freed slaves’ former owners, only to grant equality to their erstwhile bondsmen. His message, Hazareesingh writes, was one of “the importance of the gentler virtues of compassion and forgiveness, which were integral to his republican value system and his Caribbean mysticism, but also to his Christian faith.”

He enacted a constitution that defies categorization. Radical equality was side-by-side with an established Catholic Church and an emphasis on agriculture. Like America’s Founders, Toussaint knew that freedom cannot survive in a people that lacks virtue; unlike them, he prescribed that virtue by law, mandating that marriage would be favored, divorce prohibited, and laws “that will tend to expand and maintain social virtues” encouraged. The constitution was distinctly French in another way: in following the ideas of Rousseau instead of Locke, it created a system in which a great deal of power was vested in the hands of one man. Article 28 specifically nominates Toussaint to be “entrusted the direction [of the government] for the remainder of his glorious life.”

That glorious life was soon to come to an end. The French government, now directed by Napoleon Bonaparte, invaded the island that same year to restore France’s dominance over its too-autonomous colony. Toussaint was arrested and deported to France where he died in prison in 1803. Haiti eventually won its freedom, but the creole republicanism of Toussaint’s vision was never realized. Haiti’s sad history continues to be unsettled into our own time.

Hazareesingh’s tale of Toussaint is of a man who was larger than life. More than the first among equals, he possessed the intelligence and drive to lead the mostly enslaved population of Haiti in their quest for freedom against overwhelming odds. But Haiti’s tale lacks the American Revolution’s happy ending, and as Toussaint’s story comes to its premature end, one is left wondering about what might have been. Could the man known as “Black Napoleon” have defeated the white one? Could Haiti’s freedom have been founded on more stable and lasting ideas? Toussaint’s constitution may have had in it the seeds of its future failure, but his vision of a Catholic agrarian republic is a tantalizing possible answer to the question of how to maintain virtue among a free people.

Kyle Sammin is a lawyer and writer from Pennsylvania, and the co-host of the Conservative Minds podcast. Follow him on Twitter at @KyleSammin.