The Substance of Style 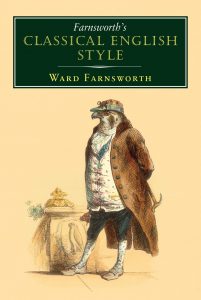 Bad and lazy writing, George Orwell famously insisted, betrays bad and lazy thinking. It also burdens and alienates the reader, who must painstakingly labor to extract the writer’s point from the writer’s poorly chosen words. Yet anyone who insists that good writing is easy to produce is likely not doing it right. For even the most erudite thinker, good writing requires singular devotion and practice.

Such self-discipline is in increasingly short supply. Despite—or perhaps because of—a proliferation of online journals, blogs, social-media posts, tweets, and texts, precious few cultivate the habit of sustained and careful writing. And it shows. Year after year, surveys of corporate recruiters and hiring managers name the ability to craft coherent, readable prose as the greatest gap in Americans’ workplace readiness.

Ward Farnsworth, dean of the University of Texas School of Law, stands athwart this dispiriting trend. A successful author in his own right, Farnsworth has published widely on law, philosophy, chess, and writing. His latest book is the third in a series exploring classical techniques in English writing. The first two books in the series, Farnsworth’s Classical English Rhetoric and Farnsworth’s Classical English Metaphor, became unlikely bestsellers.

Like its predecessors, Farnsworth’s Classical English Style is not for the novice. Yes, Farnsworth concedes, the inexperienced writer first must learn “how to make writing clear, simple, and direct—in a word, efficient.” But that is not the focus of this book. Efficiency is important, but it is hardly the last word on how to write well. We must, he insists, “learn from those who knew other things, too.” Farnsworth’s latest book calls our attention to some of those “other things.”

While most books on writing style emphasize how to avoid mistakes, “the more meaningful decline of the language doesn’t involve the presence of mistakes.” Farnsworth stresses the lesser-known stylistic virtues: “the selection of words, the arrangement of sentences, the creation of cadence.” As with his earlier forays into rhetoric and metaphor, Farnsworth teaches by showing, by drawing on historical examples from the undisputed masters of English style.

These include great writers of fiction (Dickens, Melville, Shakespeare, and Thoreau); eloquent statesmen (Burke, Churchill, Lincoln, Macaulay, and Webster); and accomplished writers and essayists (Carlyle, Chesterton, Emerson, Hazlitt, Johnson, and Wollstonecraft). Although lesser-known in bookish corners, the jurist Oliver Wendell Holmes, Jr.—perhaps Farnsworth’s most beloved stylist—is in a class all his own.

In stressing the importance of word choice, Farnsworth reminds us that modern English is a mongrel language. Older, shorter, and less formal words often have Germanic or “Saxon” roots; longer, prettier, and more formal words arrived more recently from Latin and French. So English writers typically may choose between a Saxon word or a Latinate word to say the same thing: next/subsequent; see/perceive; ask/inquire; grow/cultivate; high/elevated; tool/implement, and so on. Latinate words invite “thought not feeling,” they “tend to create distance from what they describe.” Saxon words, by contrast, are “more visceral” and “take a shorter path to the heart.”

While a good writer will generally prefer the Saxon over the Latinate, the best writers know how to mix plain and fancy words to achieve a desired stylistic effect. Take the “Saxon finish,” by which a series of flowery Latinate words crashes back down to earth in a Saxon crescendo. “The fancier words make their point up in the air; the simple words at the end plant the speaker’s feet.” The King James Bible is chock full of this technique, such as in Isaiah 53:5:

But he was wounded for our transgressions, he was bruised for our iniquities: the chastisement of our peace was upon him; and by his stripes we are healed.

Holmes was particularly fond of the Saxon finish, as in this sentence from The Common Law:

The degree of civilization which a people has reached, no doubt, is marked by their anxiety to do as they would be done by.

Lincoln, too, preferred to end his sentences with simple Saxon words, especially after a Latinate wind-up:

This pattern can be reversed to achieve a kind of lift off, a “sense of compression released.” Sentences with a Latinate ending, Farnsworth explains, “go from a tight start to a finish that flows freely and gains in height.” Consider the King James Bible’s rendering of Proverbs 10:29:

The way of the Lord is strength to the upright:
but destruction shall be to the workers of iniquity.

The Latinate finish to a Saxon sentence was a hallmark of Churchill’s great speeches:

The whole root and core and brain of the British army, on which and around which we were to build, and are to build, the great British Armies in the later years of the war, seemed about to perish upon the field or to be led into an ignominious and starving company.

Shakespeare, too, used this technique to great effect throughout his plays, as in this line from Othello:

Yet I’ll not shed her blood;
Nor scar that whiter skin of hers than snow,
And smooth as monumental alabaster.

In each example, short and simple words give way to long and mellifluous ones, generating “a kind of push” at the end of the sentence.

The greatest writers in English wielded many rhetorical devices to achieve a desired effect. One common classical trope, metonymy, is a memorable way to refer to a thing by invoking something closely associated with it. In Bulwer-Lytton’s oft-clichéd adage “the pen is mightier than the sword,” for example, the pen is a stand-in for persuasive writing, the sword a substitute for physical force or violence.

By replacing an abstraction with a concrete image, metonymy “engages the imagination” much like a metaphor. And like the Saxon ending, closing with metonymy often gives a sentence “a sense of oscillation and heat.” Metonymy also is an effective way of “letting the air out of an abstraction,” as in this quip from Dr. Johnson in Boswell’s Life of Johnson:

If he really does think that there is no distinction between virtue and vice, Sir, when he leaves our houses let us count our spoons.

Yet sometimes, for added emphasis, metonymy may be followed by the thing itself, as in Shakespeare’s Hamlet:

Give every man thy ear, but few thy voice;
Take each man’s censure, but reserve thy judgment.

And some of Holmes’s most memorable zingers end in metonymy:

While Farnsworth rightly cautions that metonymy, like most of the rhetorical devices he surveys, can prove disastrous when deployed by an inexperienced writer, everyone can benefit from learning how the masters have put it to use.

Farnsworth also examines the stylistic power of sentence structure. Conventional style guides commend shorter sentences (about fifteen to twenty words). But as with the general rule to use short and simple words whenever possible, “good writers know more than simple advice can capture.” Just as short words are more striking next to longer words, the best English stylists often paired short sentences with longer ones.

One common classical technique is setting up a short sentence with a longer one. Take this example, from Burke’s Reflections on the Revolution in France:

The military conspiracies, which are to be remembered by civic confederacies; the rebellious municipalities, which are to be rendered obedient by furnishing them with the means of seducing the very armies of the state that are to keep them in order; all these chimeras of a monstrous and portentous policy must aggravate the confusion from which they have arisen. There must be blood.

Note how the relationship between the two sentences is symbiotic. The short sentence “summarizes or punctuates what has been said at more length.”

Of course, combining long and short sentences is not the only way to achieve stylistic tension. Mixing short and very short sentences can also produce a powerful effect. This was a particularly favorite technique of Churchill’s:

What is the change that has taken place since we separated last August? It is this. The League of Nations is alive. It is alive and in action. It is fighting for its life. Probably it is fighting for all our lives.

Is Mr. Hastings a man against whom a charge of bribery is improbable? Why, he owns it. He is a professor of it. He reduces it to scheme and system. He glories in it.

In such examples, the relevant contrast “lies between the brevity of the sentences and the indignation of the speaker.”

And there’s much more. Farnsworth highlights how the best writers build tension by creating rhythms with different sounding syllables, by varying between active and passive voice, and by constructing right-and left-branching sentences. He discusses anacoluthon, which occurs when a writer changes the grammatical structure of sentence in midstream, and other grammatical and stylistic disruptions. And he emphasizes the virtues of the passive voice, which in his view “suffers from an undeserved bad reputation.” While this review cannot unpack all the many treasures of classical style that Farnsworth unearths, hopefully it has whetted the reader’s appetite for more.

Few books on writing style are page-turners, yet Farnsworth succeeds in both entertaining and instructing the diligent reader. True, not every classical technique can be revived. But Farnsworth believes—as do many traditionalists—that “it’s worth knowing how great things have been done in the past, whether or not we can do all of them now.” The typical writer does not begin, Jacques Barzun observed, with “well-shaped thought, trimmed and polished, but with an intent—perhaps with several, overlapping and conflicting.” That is why the overriding rule of style is “to keep solely in view the thought one wants to convey.” Page after delightful page, Farnsworth showcases age-old ways for doing just that.

A former Wilbur Fellow at the Russell Kirk Center for Cultural Renewal, Cory L. Andrews is Vice President of Litigation for the Washington Legal Foundation.